Four changes that are shaping the Chinese market

Needless to say, China remains (by far) the world’s leading source of international students. With average annual growth of 9% over the last couple of decades, the number of Chinese students abroad has more than doubled since 2010 alone with over 600,000 going overseas to study in 2017.

Each of these are important in terms of shaping trends in the market, and they include the notable increase in the proportion of Chinese students pursuing STEM or science studies abroad as well as a steady growth in the number of younger students going overseas (that is, those aged 18 or younger).

In addition to these, we have highlighted four other factors that are likely to have the greatest impact on the Chinese market for the foreseeable future.

#1. Study abroad for everyone

Speaking through a translator, Mr Sang noted a pronounced shift in terms of the economic or professional class of that families that are sending their children abroad. The following chart describes a distinct increase in the proportion of families outside of the senior or middle management groups with children enrolled overseas. 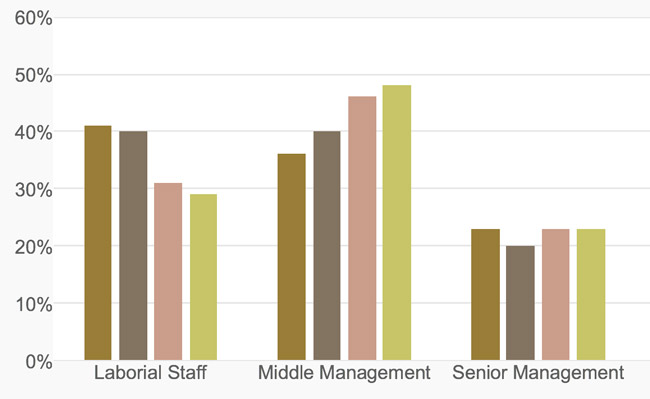 “This means that more families outside of China’s leading cities are now also sending their kids abroad,” said Mr Sang. “As the market in smaller cities continues to grow, many agents are also expanding their operations to those cities.”

In a strongly related trend, BOSSA reports that Chinese students are now going in greater numbers to a wider field of destinations, and that this is partly a function of affordability. “The cost of higher education is going up in China,” said Mr Sang. “If it costs about the same, or less, to go abroad, why not do it?”

This trend is especially reflected in the significant increases in Chinese student numbers in destinations throughout Asia and Europe. There were, for example, nearly 110,000 Chinese students in Japan in 2017, a roughly 12% increase over the year before. And China is a leading non-EU sender for major European destinations, including France, Germany, and Russia.

Major factors in choice of destination for this growing proportion of middle class families include affordability, the ease with which students can secure employment abroad, and the quality of job opportunities and salary overseas.

However, this expanding field of study destinations is not strictly a matter of a growing proportion of middle class families looking for more affordable alternatives to the traditional favourites of the US, UK, Australia, and Canada. It also reflects the impact of policy change in individual destinations, particularly around admissions or visa requirements and opportunities to work during and after a programme of studies.

Another policy, this time on the part of the Chinese government, that is playing a part here is China’s massive development and foreign investment framework “One Belt, One Road”. The OBOR framework is building stronger ties between China and many of its regional neighbours, especially in Southeast and South Asia. Partly helped along by targeted Chinese government scholarships, there has been a marked increase in the number of students enrolled in countries across the OBOR trade routes over the last few years.

Related data from JJL Overseas Education indicates that nearly 57% of Chinese students that go abroad do so with the help of an education agent – as opposed to the 13.4% that register directly with an institution abroad, or the 6% that do so with the assistance of family or friends.

Even so, as in most education markets online channels and other non-agent information sources are playing an increasing role – whether the student engages an agent for study abroad planning or not.

BOSSA research indicates that roughly 80% of prospective clients in China carefully consider the qualifications of agency counsellors when selecting an education agent. This underscores the importance of professional training and qualifications in the field, such as the China Education Agent Course (CEAC), an online training course offered jointly by ICEF and BOSSA.

In addition to expanding the field of CEAC graduates, BOSSA has also established a major information portal for agent staff in a bid to further strengthen counselling services. All of these initiatives reflect the increasing empowerment of Chinese students and families, and the greater expectations they have for knowledgeable and authoritative counselling services when engaging education agents.