There is some bright news for the British higher education sector: newly released Higher Education Statistics Agency (HESA) statistics show that enrolment by non-EU students increased by 3% in the 2013/14 academic year after having fallen the previous year for the first time in 29 years. HESA counted 310,195 non-EU students in 2013/14, a record-high foreign enrolment for British universities.

The news is tempered, however, by several underlying trends:

Looking back to 2012/13: why non-EU students matter so much to British universities

It was not long ago – 2010/11 – that British higher education institutions enrolled their highest-ever number of students: 2,501,295. But a lot can change in three years. Enrolments have fallen every year since then, and a big source of the decline has been a decrease in undergraduate enrolments: in 2012/13 domestic undergraduate enrolments fell by 18% and EU enrolments by 20%.

Therefore, while it was not a major increase, the 3% uptick in overall international undergraduate enrolments in 2012/13 was an important indicator for UK universities, and it underlined the key role of international students to the health and fortunes of British higher education institutions.

In particular, it emphasised the importance of non-EU students, since without these students in 2012/13, overall enrolments would have looked significantly worse. The 3% increase in international students was actually composed of steep declines (of 20%) in enrolments from other EU countries paired with healthy increases from non-EU countries. Those EU student declines coincided with the introduction of increased tuition fees for EU students (the maximum level of tuition fees rose from £3,465 to £9,000) as well as other EU students’ inability to access the same student loans as English students.

And now: some stability but only marginal growth

In 2013/14, overall (domestic, EU, and non-EU) enrolments in British higher education decreased by 2%, which is in some ways good news as it reflects a slower decline from the 6% decrease registered the previous year.

Undergraduate enrolments decreased by 2%, while postgraduate enrolments increased by 1% over the previous year. First-year enrolments – a very important component of the health of the British higher education system – went up by 3% from 2012/13 to 2013/14, a welcome reversal of the decline from 2011/12 to 2012/13.

As the following chart reflects, non-EU student enrolments accounted for 13% of total student numbers, compared to 5% for other EU countries. 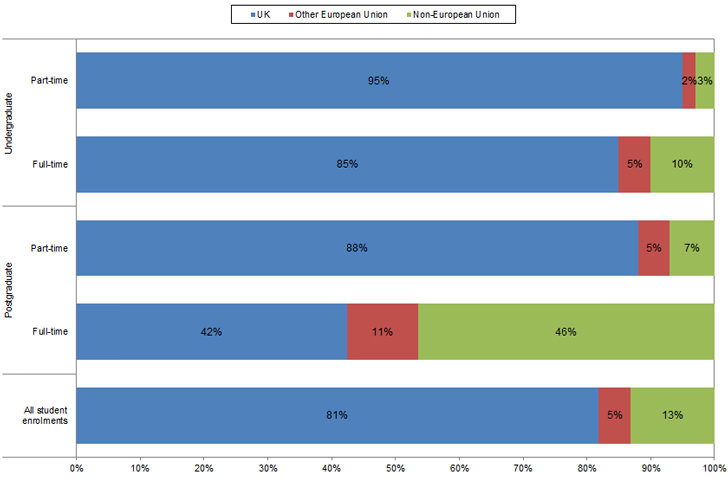 India and Pakistan sending fewer students, but decline may be slowing

2012/13 marked a very worrisome time for UK institutions insofar as their enrolments from key source countries India (second after China) and Pakistan were concerned. Overall first-year Indian numbers across the English higher education system fell by 26% in 2012/13 (from 16,335 the previous year) to 12,280; the decline among Pakistanis across the system was 17%.

Still, the UK policy instituted in 2012 that sees non-EU graduates required to obtain a job within four months offering at least a £20,300 salary a year in order to obtain a work visa remains in place. This is not attractive to many Indian students, who have been able to access government loans to study abroad – loans that need to be repaid. Dr Paul Chellakumar, Patron of the Association of Accredited Advisors on Overseas Education (AAAOE) in India, told Study Travel Magazine last year that:

“[Since they are using government loans to finance study abroad] it is very important for Indian students to have a chance to work after graduation to at least repay the loan.”

Dr Chellakumar told the magazine that in recent years the UK has lost more than 80% of its share of Indian study abroad students, while Australia, New Zealand, and Canada have increased their share of this key sending market.

British universities may in some ways be heartened by the fact that HESA reports that non-EU students increased by 3% from 2012/13 to 2013/14. Though it is not a dramatic gain, it might be taken as a sign that British institutions are still attracting international students despite the more restrictive immigration policies their government has been implementing over the past few years.

In 2014, those policies got more directly focused on British institutions when the government announced tighter controls on institutions that sponsor international students to study in the UK. Now, universities and colleges can only maintain their Highly Trusted Sponsor (HTS) status if 10% or fewer of the students they recruit are refused student visas by the Home Office (formerly the threshold was 20%). Of this new policy, a Universities UK spokesman commented:

“It is important to note that a student visa refusal does not always equate to a deliberate attempt to abuse the immigration rules. It can relate to a genuine mistake by the applicant in failing to provide the precise documentation, such as the correct bank statement, required by the Home Office. Using visa refusal rates as a measure to determine the future of a sponsor’s Highly Trusted Sponsor status is a blunt mechanism and could also have a disproportionate impact on smaller institutions.”

“It is notable that this latest crackdown has not been matched by a sensible liberalisation – like removing genuine students from the net migration target, which has been called for by half a dozen cross-party select committees.”

But holding on amid increasing competition for international students

Gordon Slaven, the British Council’s Director of Higher Education, sums up the latest HESA statistics in saying: “While the UK sector can be pleased that the overall numbers have increased, our competitor countries such as the USA and Australia have shown much more significant increases.”

As we reported last year, the US recently recorded its eighth consecutive year of international enrolment growth, expanding 8% in 2013/14 to reach a record high of 886,052 students.

Over in Australia, international student enrolments are on the road to recovery and its ELICOS (English Language Intensive Courses for Overseas Students) sector is particularly healthy.

Meanwhile France has eased post-study work restrictions and is looking to double its international student numbers by 2025. The country will need to see stronger growth rates to meet that target, but foreign student enrolments were up 3.5% over 2010/11, hitting 295,084 foreign students in 2013/14.