It happened without a great deal of fanfare, but sometime over the last couple of years China surpassed other leading countries, such as France, Germany, and Australia, to take up the number three spot among the world’s most-popular study destinations for higher education studies.

A report from the US-based Institute of International Education’s Project Atlas notes that China hosted nearly 330,000 foreign students in 2012, with only the UK and the US home to larger international student populations in higher ed. 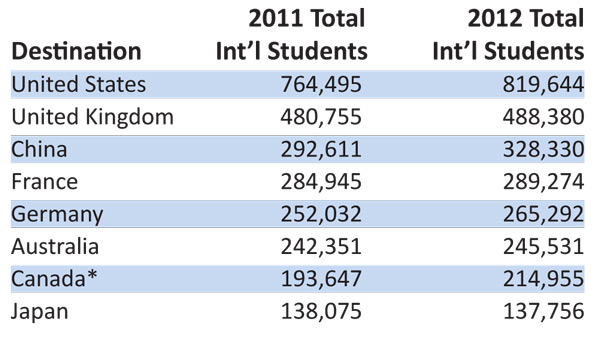 Even more remarkable, China’s market share of globally mobile higher education students barely registered in 2001. But by 2012, its 330,000-strong international enrolment represented an 8% share of the global market.

All that to say that China is suddenly well on its way toward an ambitious goal of attracting 500,000 foreign students by 2020.

“China wants to go global,” notes a recent China Daily article. “What better way than to have foreigners pay for the privilege to do the job of spreading their culture and language for a fraction of the cost of running the Confucius Institutes around the world and generating goodwill in the bargain?…Chinese companies want to go global. What better way than to find self-funding interns learning the ways of the Middle Kingdom and to employ them in their home countries?”

As the importance of China’s economy and the quality of its universities increases, so does the country’s appeal as an education destination for international students. The Chinese economy has clearly been a global powerhouse for some time, but it is now pegged – by the World Bank and other leading statistical agencies – to overtake the US as the world’s leading economy in 2014. Owing to changes in statistical models for calculating relative purchasing power, as well as the Chinese economy’s faster-than-expected growth in recent years, China’s move to the top of the global economy is happening several years ahead of the timing projected in earlier forecasts.

Needless to say, this is a powerful draw for foreign students within Asia and beyond.

Asia remains the engine of growth in international education and the emergence of such a significant economic power – and rapidly strengthening study destination – within Asia carries with it important implications for other leading host countries around the world.

University World News reports that China’s top universities – most of which deliver significant programmes in English – are seeing increasing numbers of overseas students from non-Asian countries. But there has also been “a substantial increase” in the number of international students enrolled in degree programmes delivered in Chinese.

Those students are pursuing degrees in China, but also work opportunities during and after their studies. The strong Chinese economy exerts a strong pull on prospective students, even with a tight market for university graduates in China these days.

“The General Office of the State Council said that the number of college graduates will total 7.27 million this year, setting a new record and making it more difficult to find jobs amid the slowdown of the country’s economy,” cautions the Want China Times. But “slowdown” is a relative term and even a slower Chinese economy is still a force to be reckoned with – one that is still capable of generating new jobs at an impressive pace. The Chinese Ministry of Human Resources and Social Security (MHRSS) reported recently that China added 4.73 million jobs in the first four months of this year, representing a modest increase over the same period in 2013.

A recent item from the Global Times tells the story of 29-year-old Ejaz Karim, from Pakistan: “Before coming to China, Mr Karim had three years experience working at a tour company at home. Now he wants to get into the hotel management industry. ‘The economy in China is growing faster than in my country,’ Mr Karim said. ‘I know the job market is becoming more and more competitive as the number of foreigners increase, but I think I can stand out with my international background.’”

And – in an apparent response to calls from observers and educators alike – the Chinese government has also taken steps recently to open up new work opportunities for foreign students during their studies. “Until last year, foreign students were not allowed to work part time or take on an internship while they were studying. Some believe these policies were the major reasons that stopped some foreign students from studying in China,” notes the Global Times. “Employers face fines of up to 10,000 yuan (US$1,600) for each foreigner illegally hired, and foreigners who work illegally may have their income confiscated and can face detention or deportation.”

However, as of July 2013, international students are now permitted to take part-time jobs during their studies, or to pursue paid internships off campus, so long as they have permission both from their host institution and Chinese immigration authorities.

Expanded work opportunities for foreign students will no doubt play an important role in further strengthening China’s international student enrolment, perhaps especially so for students from neighbouring countries across Asia.

For more on inbound and outbound mobility in China, please see our earlier post “Looking at Chinese market trends for 2014.”