In line with this strengthening economic impact, Australia reversed a three-year enrolment decline in 2013, registering a modest increase of 2.6% in total international student numbers and a much more noticeable bounce (9.3%) in student commencements for the year.

It now appears that those promising 2013 results may have been the beginning of a longer-term growth trend. The latest figures from Australian Education International (AEI) for year-to-date through May 2014 paint a convincing picture of a strengthening enrolment base for the country.

Some highlights from the AEI data through May 2014 include:

A Department of Education research brief points to the distribution of economic impact by sector:

Five source countries accounted for 52.7% of Australia’s international enrolment across all sectors.

China and India are the big drivers in higher education enrolment, representing 38.4% and 9% of total student numbers in the sector respectively. When it comes to VET enrolment, the top countries are India (18.6%), China (9.9%), South Korea (7.8%), and Thailand (7%).

Meanwhile, China is again the top source country for ELICOS providers (22.6% of enrolments), followed interestingly by Brazil at 9.3% and Thailand at 8.9%.

Foreshadowing further diversification in the enrolment base going forward, several countries outside of Australia’s top five markets registered double-digit growth YTD May when compared to the same period for 2013, as the graph below illustrates. 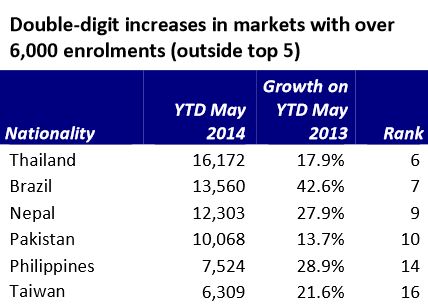 Double-digit increases in markets with over 6,000 enrolments (outside top 5). Source: Australian Education International

Given the pathway aspect of ELICOS programmes – that is, that many of the students following ELICOS courses in Australia will go on to further education in VET or higher education – the strong growth and changing enrolment base in Australia’s English language centres is particularly noteworthy.

An English Australia news release notes that YTD May 2014 there were nearly 10,000 more students beginning ELICOS programmes compared to the same period for 2013, and adds:

“This growth represents the best performance of any year except the peak year of 2009.”

Among the growth areas noted above, ELICOS providers have seen a triple-digit increase in Indian commencements this year. “The number of new Indian students in English language colleges jumped 267% to just under 3,000,” reports The Australian. “But [this is still] well short of the 6,000 Indian commencements for ELICOS in the year to May 2008.”

The report goes on to note that a major driver of Indian enrolment growth in 2008 was the packaging of English language courses with vocational programmes, and where “vocational education was a fast-track to permanent residency as a skilled migrant.”

This time, however, “it’s higher education packaging,” said Sue Blundell, executive director of English Australia. The shift is attributed in part to the streamlined visa processing (SVP) provisions for university-bound students, a model that the Australian government began to expand in late-2013 to include an initial group of non-university providers. “Under the streamlined student visa processing arrangements, eligible student visa applicants from participating universities and eligible non-university higher education providers are assessed as though they are a lower immigration risk, irrespective of their country of origin,” says the Australian Department of Immigration.

Most recently, Education Minister Christopher Pyne announced in May 2014 a further expansion of SVP provisions to include students enrolled in advanced diploma programmes with institutions in the higher education and VET sectors.

“Extending SVP arrangements will help capitalise on [enrolment growth trends], reducing red tape and helping to attract further students from overseas,” said the Minister. “The department will write to eligible providers by the second half of 2014 inviting them to participate in the arrangements,” notes a related government statement. “Subject to the legislative change process we anticipate that the extended arrangements will commence by early 2015.”