Record-high international enrolment in Canada in 2013; many students plan to stay

The number of international students in Canada has increased by 84% over the last decade, growing 22.8% from 2011 to 2013 and 11% from 2012 to 2013. A new report from CBIE – A World of Learning: Canada’s Performance and Potential in International Education – draws on the latest student data to expand on this finding and highlight important trends in Canada’s international student enrolment.

Looking across all levels of study, there were 293,505 international students in Canada in 2013. This represents a 5% share of all of the world’s internationally mobile students and (according to the IIE’s Project Atlas ranking) places Canada seventh among leading study destinations, after the US, the UK, China, France, Germany, and Australia.

International students in Canada by year, 2003 to 2013, all levels of study. Source: CBIE

Included among that tally for 2013 are the 111,840 new international students that Canada welcomed during the year. CBIE reports, “Over the past decade the average growth rate of new arrivals has shown moderate, sustained growth of about 6% per annum. During 2012 and 2013, the growth in the number of entrants slightly surpassed this average, coming in at 6.5% and 6.8% respectively.”

International students comprise approximately 8% of all tertiary enrolments in Canada (8% of undergraduate, 16% graduate, and 26% doctoral). This is double the OECD average of 4% but notably below Australia (18%) and the UK (17%). In the US, meanwhile, the proportion of international students matches the average for OECD states: 4%.

The nearly 300,000 international students enrolled in Canada in 2013 came from 194 countries. However, the top five source countries – China, India, South Korea, Saudi Arabia, and France – accounted for more than half of the 2013 enrolment. The top 10 sending countries, as shown in the table below, are the source of 71% of all international students in Canada; China alone accounts for nearly one in three (32%) foreign students in the country. 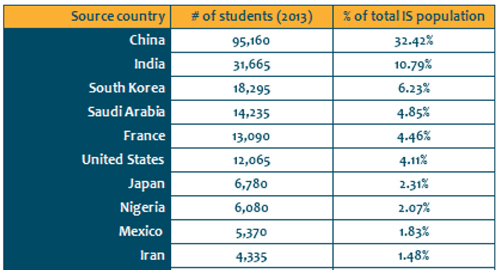 As is the case in other major study destinations, however, the composition of Canada’s international enrolment base shows signs of shifting. There were notable year-over-year increases from important emerging sending markets in 2013, including Nigeria (+29%), Russia, (+24%), Brazil (+17%), and Vietnam (+16%). More established markets also registered steady gains for the year, including China with 18% growth from 2012 to 2013 and France (+16%).

South Korea has been the only top 10 sending country to register a decline in recent years, with the number of Korean students in Canada falling 16% between 2011 and 2013. This is in line with our earlier observations of challenging market conditions in this important source country, and of weakening near-term demand for study abroad.

At the regional level, South Asia has shown the strongest growth of late, with new arrivals from the region increasing 181% between 2009 and 2013. “India is responsible for the majority of growth from this region,” adds CBIE. “The number of students from that country more than [tripled] from 2009 to 2013 (9,561 to 31,665).” Other strong growth regions include Eastern Europe (notably Ukraine and Kazakhstan) and Africa.

In 2013, 55% of all international students in Canada were enrolled in university studies, 21% in “other postsecondary” (i.e., colleges of institutes), 16% in secondary school, 5% in trade programmes, and 3% in other programmes.

As the following figure illustrates, the proportion of enrolment accounted for by each level of study has not shifted significantly over the past several years, with the exception of trade programmes which have registered a marked decline.

International student entrants into Canada by level of study, 2009 to 2013. Source: CBIE

Growth in “other postsecondary,” meanwhile, has outpaced the other sectors over the last five years – a development that CBIE attributes largely to the Student Partners Program, a streamlined visa application process available to Chinese and Indian students intending to study at a designated Canadian college or institute.

What the students say

The World of Learning report draws as well on a survey of international students in Canada. The survey – the third edition of an annual research cycle that began in 2012 – was conducted by CBIE in April and May of this year, reaching 25 institutions across Canada and resulting in 3,095 responses from current students.

28% of respondents to the 2014 survey had also applied to institutions in other countries (that is, other than Canada). This is up from the 20% of respondents in 2013 who had indicated they had applied to study outside of Canada as well. CBIE adds, “Of these students who applied to study in another country, almost half (49%) applied to the US, 17% applied to the UK and 7% applied to Australia. Compared with 2013 data, there was an 11% increase in the number of students also considering the US. There was a slight decrease (-6%) in the number of students applying to the UK and Australia (-7%).”

Slightly more students (55.5%) indicated they chose Canada first as a study destination before choosing their institution in Canada (44.5% said they chose a particular institution first). The major factors in the students’ choice of Canada, as reflected in the chart below, are safety (80% of respondents indicated this to be an “essential” or “very important” factor in their choice), the quality of education (78% essential or very important), and Canada’s tolerant, welcoming society (76%).

It appears as well that student expectations are well matched by their actual experience of study in Canada. Reflecting the same levels observed in CBIE’s 2012 and 2013 surveys, 90% of 2014 survey respondents indicated they are either “satisfied” or “very satisfied” in their studies in Canada. Further, 95% would recommend Canada as a study destination.

In another interesting extension of CBIE’s survey findings from previous years, 50% of the 2014 respondents indicated their intention to apply for permanent resident status (that is, to immigrate to Canada) at some point in the future. More immediately, 41% indicated their intention to work in Canada on a temporary basis following their studies, and 55% said that they plan to continue studying after their current programme.

“International education is critical to the future of Canada and Canadians,” said Karen McBride, President and CEO of CBIE on the release of the World of Learning report. Indeed, the economic impact of Canada’s international education sector has been valued at more than CDN$8 billion in recent years, which means it is already one of the country’s leading export sectors.

If the longer-term patterns suggested in the CBIE survey are borne out in the years ahead, it appears that Canada is poised to convert a significant percentage of its international students to permanent residents over time. As we suggested in an earlier post -“Increasing the ‘stay rate’ of international students” – these direct economic impacts may represent only a fraction of the true, long-term value of internationalisation to the country’s economy and society.

This entry was posted in Canada, Most Popular, North America, Regions, Research.