A new report from America’s Council of Graduate Schools (CGS) shows that there is a continuing growth trend in offers of admission to international students from US graduate schools. Admission offers to prospective foreign graduate students increased by 9% from 2013 to 2014 – the same percentage growth year-over-year as in the previous four years. 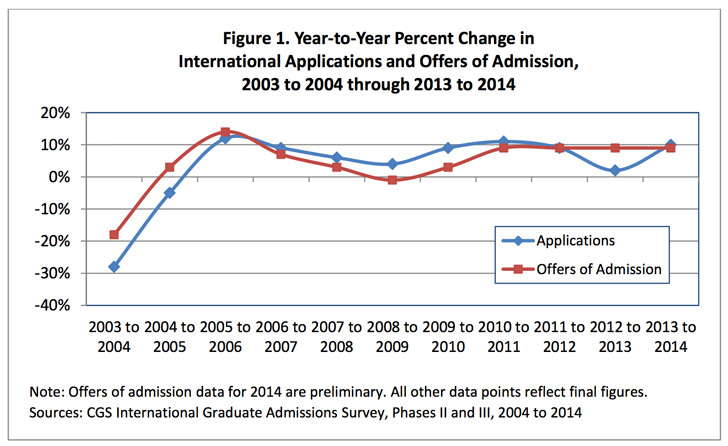 There has, however, been a notable shift over the last couple of years in the composition of the pool of US-bound graduate students:

The CGS also reports a relatively robust 10% increase in international students’ applications to US graduate programmes, compared to only 2% growth in 2012.

The sample for the CGS study comprised responses from 299 US universities, which the CGS estimates represent roughly two-thirds of the total offers of admission to prospective international students interested in graduate programmes in the US.

As recently as 2012, admission offers to Chinese students had increased as much as 20% year-over-year. That they have flattened in 2014 (dropping 1% compared to 2013) will definitely raise some alarm bells for institutions that have been relying on huge Chinese demand for American education. Many campuses with big international student compositions have focused their recruitment efforts on the Chinese market, and have seen their international enrolments heavily weighted to Chinese students as a result.

Observers suggest the Chinese drop-off is related to everything from the slowing down of the massive Chinese economy, to China’s increasing tertiary-level capacity and quality, to more regional education opportunities for Chinese, or to a combination of all three and more. This year’s flattening enrolment trend follows a modest increase (5%) in offers of admission to prospective Chinese graduate students in 2013. Already in 2013, there were signs of a slowdown in Chinese demand, with a 3% decline that year in the number of Chinese applicants.

The slowdown may be temporary, as it seems to have been in the case of India previously; India has over the past decade fluctuated unpredictably as a source of international students to the US (more on this below). Or, it could suggest that a “saturation point” has been reached in Chinese students’ appetite for US graduate education.

Whatever the case, it illustrates how important it is for internationally minded institutions to diversify their recruitment efforts among several target source countries. This is why the jumps in offers of admission to Indian and Brazilian students are so noteworthy this year.

Like China, India is a leading source of international students for US universities, but unlike China, it has been less consistent as a sending country over the past decade. This has been due in part to the Indian currency’s volatility in recent years, which made it difficult for some students to afford studying abroad.

The 25% increase in offers to prospective Indian graduate students was coupled with a 33% increase in Indian applications, according to Inside Higher Ed.

Please see our earlier post for additional background on the importance of India as a source market for international students. University World News also has a thought-provoking article on a new segment of the market of Indian students interested in study abroad: the “high flier,” defined as “children of professionals who started working in new-age industries in the late ’90s” who are “academically prepared and more importantly have an ability to pay for their experiences.”

Brazil’s Scientific Mobility Programme (also known as Science Without Borders), a scholarship programme that sends Brazilian students abroad to study in undergraduate and graduate STEM disciplines, is thought to be a major factor in the Brazilian increase. Already on track to provide 100,000 scholarships for undergraduate and graduate students over three years, Science Without Borders will, beginning in 2015, support a further 100,000 scholarships for study abroad for Brazilian university students.

“[W]e have already seen a ripple effect of increased interest among students from Brazil in coming to the United States to study not just those on the government scholarship programme.”

Suzanne Ortega, President of the Council of Graduate Schools, had this to say about the group’s 2014 tracking data for international admissions offers:

“American graduate schools continue to attract students from around the world. We should be excited about the fact that new growth is emerging from a host of different regions and nations. International students are important to the US economy because our workforce will continue to face shortages of graduate-level talent over the next decade. To support our economic competitiveness, we should make it easier – for international graduates who wish to do so – to remain and work in the US after completing their degrees.”

Her comment is timely, given the increasing signs that regional hubs – and trends toward greater intra-regional mobility – are beginning to draw market share from traditional leaders.

At the same time, there are many contrasting examples of the impact of government policy – immigration policy in particular – on international enrolment. Recent moves that allow talented students to work and stay post-graduation are already becoming a competitive advantage for Canada, while tougher immigration policy affecting international students in the UK is seen as a factor in flattening enrolment in Britain.

Educators and policy makers in the US will no doubt continue to reflect on such impacts as they also closely watch enrolment trends and shifts in the composition of foreign enrolment in US universities in the years ahead.