US graduate admissions up again this year but applications slowing

Updated data released by the US Council of Graduate Schools (CGS) in August reveals that initial offers of admission from American graduate schools to prospective international students increased 9% from 2012 to 2013, mainly due to strong growth in applications from India and Brazil.

Educators and other stakeholders follow the trend line for initial offers of admission closely, as it represents a reliable, if not exact, predictor of actual enrolment for the year.

The latest report from CGS reflects the second of a three-part annual survey cycle of US graduate schools. As The Chronicle of Higher Education noted in its report, “The findings are based on responses from 290 graduate schools that were surveyed in June and July. The respondents award a majority of the graduate degrees given to international students in the US and include many of the country’s largest graduate institutions.” The 2013 cycle will conclude with a final survey in October designed to capture final data on offers of admission and enrolment for the year.

This year’s increase in initial offers of admission follows an increase of 9% last year, and marks the fourth consecutive year of growth in international graduate admissions.

This finding updates early statistics for the year that we reported on in April and which provided the first indication of these diverging trends of increasing offers of admissions from US graduate schools and declining growth in applications from international students. 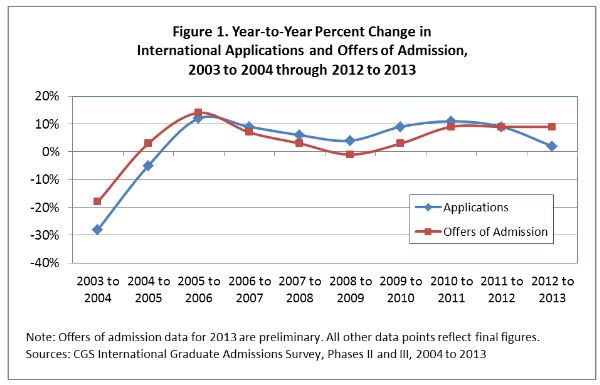 Offers to students from the key Chinese market also grew for the eighth consecutive year – up 5% for 2013 – but against a backdrop of a 3% decline in the number of Chinese applicants. This represents a sharp reversal for Chinese applications after years of strong growth, a development that was a focus of ICEF Monitor’s earlier report on the CGS data for 2013.

The decline in Chinese applications was accompanied by more substantial drops in applications from South Korea, the third-largest sending country for US graduate programmes and down 15% for this year, along with Taiwan (-13%) and Mexico (-8%). 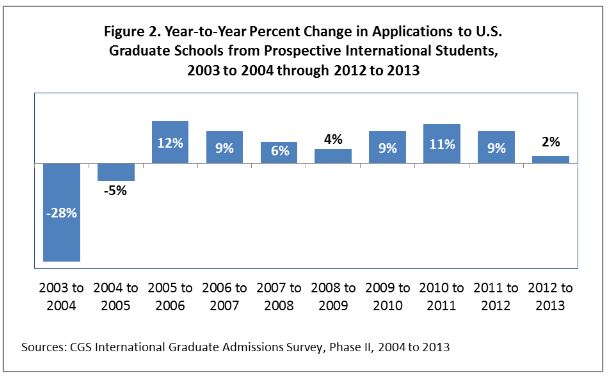 All eyes on the Chinese market

Throughout this year, the decline in the Chinese applicant pool has been one of the most remarked upon findings from the CGS data, one that has educators and industry observers wondering about what the future holds vis-à-vis the longer-term trend for Chinese admissions to American graduate programmes.

The Chronicle of Higher Education reports:

“Stewart said the disparity between the two figures does not necessarily mean that graduate schools have been forced to take less-qualified students because the pool of applicants from China is so large.

‘It’s an obvious thing to think: Oh, they must be digging deep into the barrel to fill classes,’ she said. ‘You have to understand this is a very big barrel, and the quality at the top of the barrel is very high.’”

And in a separate comment to Inside Higher Ed, Stewart added: “There’s a reason to keep an eye on this, because China is a huge provider of high-quality graduate students to US STEM graduate programmes.”

Reasons for the changes

The most recent CGS survey also asked responding schools to comment on the causes underlying any increases or declines in international applications.

Among those institutions reporting significant drops in applications from international students, the most frequently cited causes were:

Among those reporting large increases in international applications, the most frequently cited cause was increased recruiting efforts including:

Institutions reporting increases in international applications also attributed some of that growth to the overarching strengthening of select global markets for US graduate programmes:

“India and Saudi Arabia were most frequently mentioned in this category, and Brazil, China, Egypt, Iraq, Iran, Mexico, the Middle East, and Africa were also mentioned.”