The Organisation for Economic Cooperation and Development (OECD) has released its annual Education at a Glance report for 2014, and it is full of useful trend information and other background for international educators. The publication covers educational data spanning 34 OECD countries as well as the following non-OECD states: Brazil, Russia, Argentina, China, Colombia, India, Indonesia, Latvia, Saudi Arabia, and South Africa.

The broadest finding is that it is becoming more typical for the world’s students to attain at least secondary education and more common for them to pursue tertiary education as well. Younger adults are more likely to achieve higher levels of education than their older counterparts, especially in emerging markets. We will look at this trend briefly in the next section of this article.

But our main focus will be international student mobility trends. The publication documents enormous growth in the numbers of students studying abroad from 1975 to 2012 – particularly in the time span 2000–2012. Moreover, it reveals new trends in mobility, including the growing importance of intra-regional mobility and new or emerging destinations for international students.

Education at a Glance 2014 shows that roughly 8 in 10 younger adults (aged 25–34) in the survey countries have completed upper secondary education, (i.e., education that allows them access to tertiary education and expanded labour market opportunities).

As for tertiary education, attainment levels are relatively lower (roughly 3 in 10 adults have achieved a tertiary-level education) but they have risen by 10% across the OECD countries since 2000. Younger adults are generally more likely to have a tertiary education (40%) than older adults (25%), and in some countries, generational gaps are particularly striking. In South Korea, the gap is 52 percentage points between adults aged 25–34 who have completed tertiary education as compared to those aged 55–64. Wide gaps like these attest to the dramatic expansion of higher education capacity in recent years – and appetite for tertiary education – in many countries.

The report estimates that 58% of young adults in OECD countries will enter university-level programmes in their lifetimes, and that 18% will enter vocational programmes.

In 2012, more than 4.5 million students were studying abroad at the post-secondary level – more than five times the number of students abroad in 1975. The average annual growth rate in international student mobility between 2000 and 2012 was 7%.

The number of students enrolled outside their country of citizenship, by region of destination, 2000-2012. Source: OECD

Percentage of all foreign tertiary students enrolled, by destination, 2000 and 2012. Source: OECD

The importance of regions

Education at a Glance 2014 notes a continuing trend towards intra-regional mobility around the world:

“Global student mobility follows inter-and intra-regional migration patterns to a great extent. The growth in the internationalisation of tertiary enrolment in OECD countries, as well as the high proportion of intra-regional student mobility show the growing importance of regional mobility over global mobility. Student flows in European countries and in Eastern Asia and Oceania tend to reflect the evolution of geopolitical areas, such as closer ties between Asia-Pacific countries and further co-operation among European countries beyond the European Union.” 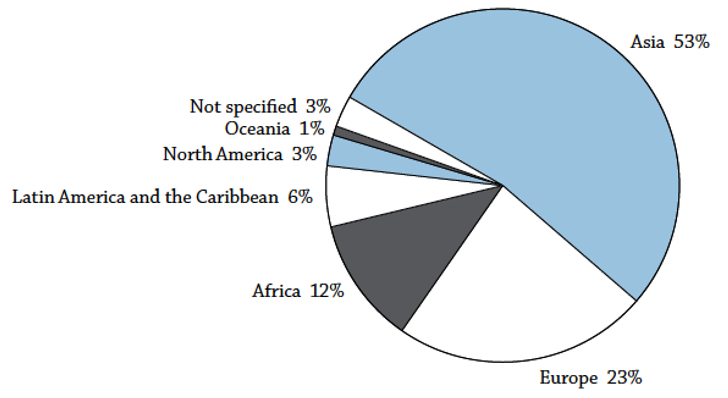 Distribution of foreign students in tertiary education, by region of origin, 2012. Source: OECD

The OECD also highlights the following as the main reasons students will travel beyond their home regions for study abroad:

But, the report says, a destination country’s proximity to source countries – and associated marketing and policies (e.g., tuition, immigration) – is increasingly a factor in international students’ decisions as to where to study abroad. So:

Europe is a prime example of the importance of region in international student mobility trends. As we reported earlier this year:

“Europeans account for nearly a quarter of all internationally mobile students and mobility in Europe, and the number of international students in Europe increased by 114% from 2000 to 2010.”

Not coincidentally, Europe has been proactive in its policies to leverage regional mobility flows, for example the EU’s 2013 approval of a major expansion of the Erasmus progamme (now Erasmus+).

With the emergence of regional education hubs such as China and Malaysia, coupled with continuing growth in demand for tertiary education across Asian markets, we can no doubt expect the global share of international students hosted within this key region to continue to grow over the years ahead.