A new study published by the International Association of Language Centres (IALC) shows that students are increasingly interested in acquiring a new language to support their academic goals, though personal reasons – such as an interest in travel or desire to learn – remain the primary motivations for language study travel.

The IALC 2018 Research Report, Perfecting the Student Experience, is based on an online survey conducted among more than 4,700 students in 136 countries between January and March of 2017 and focused on the “pre-arrival phase of the study abroad journey.” It follows an earlier report in the series that “enumerated and quantified student preferences, experiences and, ultimately, satisfaction.”

The 2018 study respondents were former or current students of IALC schools around the world. Of the nine languages offered by IALC schools, English was the preferred language of study (46%), followed by German (19%) and Spanish (15%). 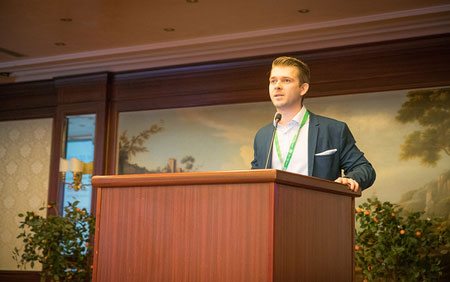 Patrik Pavlacic, head of research at StudentMarketing, presented key findings from the 2018 research report at IALC’s annual conference in Bologna.

Academic goals on the rise

Roughly half (53%) of this year’s student respondents were motivated by personal reasons for language travel, and relatedly, 40% said that “learning a language was part of their lifestyle and had been a lifelong dream.”

But those motivated to study a new language to support current or future studies is growing, with 27% now citing this reason versus 21% in 2013/14. By contrast, in the recent study 16% sought language learning for work-related reasons, a significant drop since 2013/14 when 21% chose this reason.

Chinese, English, and German for career or academic goals

Less than half of surveyed students studied Chinese, English, and German for personal reasons, with these languages more likely to be seen as instrumental for either further studies or employment. Students are particularly interested in learning Chinese for work reasons (35%). Italian, Spanish, and Japanese are the languages most likely to be studied for personal reasons.

While the dominant ways in which language students first find information on language schools is the Internet (school website or third-party portal), education agents are the main sources for junior students as well as those in the 18–24 age bracket.

The dominant reason for choosing a destination (as opposed to a particular school) was the image of the destination itself (25%), and New Zealand, Australia, and Japan were the most popular for those motivated by this reason. One in six IALC students chose a destination with future studies or employment in mind, and study in China was especially linked to this motivation.

For those students studying English, agent recommendations were the dominant influence in choosing a destination.

While the largest share of respondents booked their courses directly (32%) from their home country, this is down from 40% in 2013/14. That said, remote bookings (i.e., bookings made in the student’s home country) are responsible for 45% or more of bookings for studies in French, German, and Italian, and an impressive 62% of bookings for Japanese language learning.

In-person bookings have fallen to 15% from 18% in 2013/14, but they compose by far the largest portion of bookings (39%) when it comes to Chinese language learning.

The increasing use of education agents at some point along students’ journeys to their ultimate choice of school and destination is highlighted in this excerpt from the study:

“Every fourth student uses an education agency at some point, even if ultimately enrolling via another channel, predominantly directly (remotely, as well as in-person at the school) or through educational institutions in the home country.”