English Language Teaching (ELT) schools in Malta hosted more than 87,000 international students in 2017 according to Malta’s National Statistics Office (NSO), representing the first year of significant growth after a marginal increase last year and a slight decline in 2015. The year-over-year growth registered in 2017 was 13.6%, much more robust than 2016’s uptick of only 1.6% over 2015.

Malta’s international ELT students represented close to 4% of Malta’s total tourists in 2017. Women made up 60% of their numbers.

General English courses were by far the most popular choice in Malta in 2017, accounting for nearly three quarters (71.5%) of ELT enrolments. Intensive English courses enrolled another 16.5% of the total international ELT student population.

Russian student numbers in Malta’s ELT schools grew again in 2017 to 4,820, making it the second year of growth after a steep decline from 2013 through 2016. The most notable increases, however, came from Brazil (which sent 4,520 students, a 72.5% increase over 2016) and Poland (4,510 students, an increase of 44% over 2016). Brazil vaulted from ninth place into the Top 5 sending markets as a result, just edging out Poland and displacing Spain. 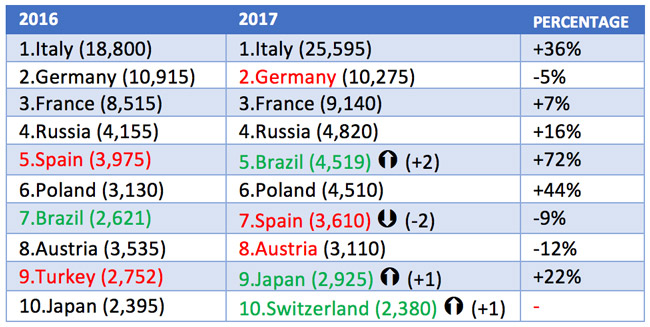 The top ten sending markets for Malta, 2016 and 2017, with changes in table position and percentage growth indicated year-over-year. Source: NSO

Other countries that sent notably bigger proportions in 2017 include Colombia, South Korea, and Ukraine. By contrast, the number of Swedish ELT students in Malta halved from 1,300 in 2016 to 630 in 2017.

Students under the age of 15 make up 32% of international students in Malta’s ELT sector, and their numbers have grown by 63% since 2014. Students aged 16–17 and 18–25 are the next largest groups, making up 19% and 21% respectively. By contrast, those aged 50 or older represented only 7% of international students in the country’s ELT sector in 2017.

However, the average length of stay fell to 2.8 weeks from 3 weeks in 2016. As in 2016, it is likely that shorter student stays are related to the increasing proportion of young students in ELT schools. Younger students are more likely to come in summer months than older ones, and stay for less time.

Average stays also vary by nationality. The NSO notes that,

Summer months are the busiest

June and July are notable for the significant influx of students aged 15 and under: these youngsters represent 44% of the total international student population studying in the country’s ELT schools during this period, in comparison to the 32% they represent on average throughout the year.

By contrast, December and January are the most popular months for students aged 18–25. This age group accounts for 33% of the overall ELT population in December and 37% in January (their normal representation in the total is 21%).