New survey data from Languages Canada reveals that Canada is the latest major destination to chart a decline in ELT (English Language Teaching) enrolments for 2015. Based on data supplied by 226 member programmes – which together represent an estimated 80% of all ELT enrolment in Canada – the number of students studying English in Canada fell 2.55% last year, from 137,416 in 2014 to 133,910 in 2015. Student weeks, meanwhile, declined by 4.57% (from about 1.65 million in 2014 to 1.57 million last year).

Taking a longer view, the 2015 results represent an overall drop of 6.31% over the four years from 2012 to 2015. “International researchers have remarked that the global language travel sector growth is slowing down. This year’s annual survey report confirms the predictions,” said Languages Canada Executive Director Gonzalo Peralta. “However, it is clear now that Canada’s language education sector is not simply slowing in growth, it is underperforming. Not only have we failed to keep pace, we have actually shrunk.”

As Mr Peralta’s comment suggests, the trend in Canada compares to recent-year growth in other key destination markets, notably the US and Australia, and to overall growth in ELT student weeks worldwide over the same period.

This global trend has also been tempered in recent months, however, by global surveys indicating slowing growth for English language studies abroad, and by reports of declining enrolment in other notable study destinations, including the UK and Malta.

When asked to indicate the biggest challenges they face in the marketplace, Languages Canada members most commonly cited increasing competition from other language programmes – both in Canada and out – as well as student visa denial rates and visa processing times. Member programmes report high rates of visa refusals, in the range of +/- 20%, from a number of emerging markets, including Colombia, Venezuela, Libya, and the African continent.

Even so, the report adds, “The most interesting change from last year’s survey is that the number of programmes reporting in Canada and international competition have both increased. This suggests a sector that is growing and becoming saturated.”

The top five source countries reported by Languages Canada members for 2015 were Brazil, Japan, China, South Korea, and Saudi Arabia. More broadly, the top ten source countries accounted for 80% of reported enrolment last year. In one of the report’s more troubling observations, however, all top ten markets were found to have declined last year, with the exception of South Korea, Mexico, and Colombia which recorded marginal gains.

As the chart above reflects, the decline in Saudi enrolment has been particularly noteworthy, and the indications are that a changing policy and funding environment in this key market will continue to challenge current enrolment levels going forward.

In an effort to counter market disruptions among both established and emerging sources, Languages Canada has been leading coordinated marketing efforts in a number of markets in recent years, including Turkey, the Middle East, Vietnam, and China last year and, in both 2013 and 2014, Russia, Ukraine, Spain, Kazakhstan, Turkey, Italy, China, and Vietnam.

While it is too early to properly measure the outcomes of these efforts, the results have been mixed to date. Only China, Turkey, Middle East, and Ukraine registered increased enrolment from 2014 to 2015, with Turkey the biggest gainer at +40% year-over-year. Looking ahead, the association’s overseas missions in 2016/17 will focus on Colombia and Italy.
Meanwhile, the top five markets of interest among Languages Canada members were reported as Brazil, China, Mexico, Vietnam, and Japan.

Length of study and status

The average length of study, and broad patterns with respect to programme length, remained largely unchanged from 2014 to 2015. The average term of study for an ELT student in Canada remains just under 12 weeks. 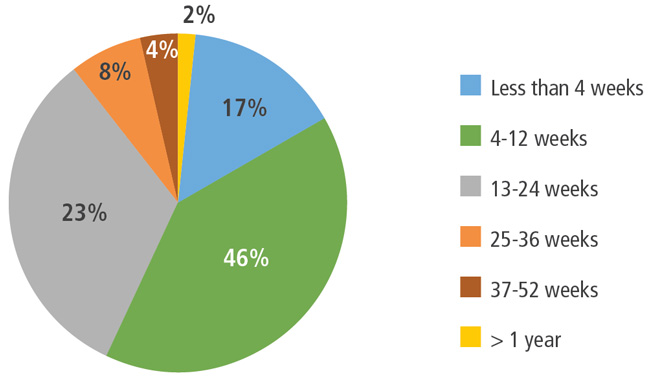 However, Languages Canada members continue to report declines in the proportion and number of ELT students holding student visas (“study permits”). The number of study permit holders dropped from roughly 47,000 in 2014 to just under 43,000 in 2015 (a decline of more than 8%, or about 3,800 students), and that following a decrease of roughly 5,000 study permit holders the year before.

This is a concerning trend within the overall enrolment picture as it indicates a decreasing proportion of students enrolled in longer-term ELT studies in Canada, whether leading to further studies in the country or otherwise, and to potential knock-on effects with respect to international enrolment in Canadian higher education. Even so, Languages Canada members report that about 37% of all enrolled students in 2015 (that is, just under 50,000 students) were preparing for post-secondary studies. 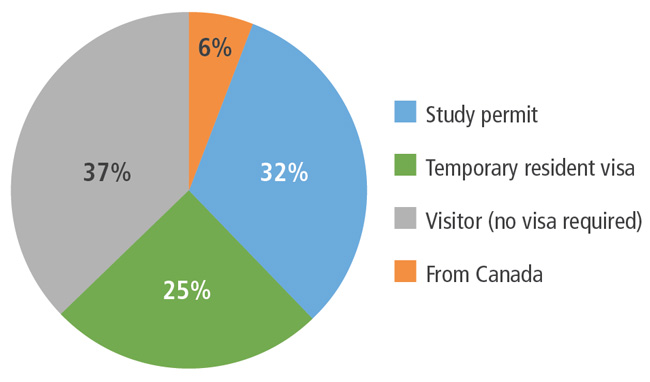 Despite the recent-year declines in the enrolment base of ELT students, the sector remains a major contributor to Canadian education exports. Languages Canada estimates that tuition and living expenses paid by ELT students in the country last year worked out to about CDN$1.5 billion (US$1.16 billion), with the average weekly spend by students increasing slightly over 2014 due to underlying increases in tuition and accommodation fees.

Even so, the association estimates the cost at failing to keep pace with global growth rates – in terms of lost revenue – at as much as CDN$180 million for 2015 alone. The report makes a strong case for strengthened coordination among government and industry stakeholders and for changes to government policies that restrict work rights for language students in Canada. “Canada’s accredited language programmes are facing fierce competition internationally from countries like Australia and New Zealand,” adds Mr Peralta. “We need to act now and develop better policy for the sector before Canada loses its standing even further.”