Canada: language enrolment up in 2014 but losing market share

A national survey released today shows that enrolment in Canadian language programmes increased marginally between 2013 and 2014. This follows a notable decline from 2012 to 2013 and, all told, the clear implication is that Canada is losing market share to other major language travel destinations, a number of which recorded stronger growth over the same period.

The Languages Canada 2014 Annual Survey Report provides a detailed analysis of enrolment in English and French language programmes in Canada. It offers a number of important findings, including the rising importance of emerging markets for Canadian language programmes. However, the report also clearly sets out that Canada’s progress in this key sector of international education is being thwarted by government policy.

In other words, with nearly 18% more programmes reporting enrolment in 2014 (compared to 2012), the total number of students has still declined by nearly 4% over those two years.

The Languages Canada survey draws exclusively on enrolment data reported by members and so is not a complete measure of the Canadian market. However, member programmes account for an estimated 80% of total enrolment in the country.

In contrast, American language programmes registered an increase of 12% in their international student numbers between 2012/13 and 2013/14. And Australian language providers also surpassed Canada with an 11% increase in 2014 for a total enrolment of 163,542.

“Based on international growth rates, we should have welcomed close to 160,000 international language students in 2014,” says Languages Canada Executive Director Gonzalo Peralta. “There certainly has been some improvement over the previous year but when you factor in member growth we haven’t grown the numbers a great deal from the year before or captured more market share; we’ve just maintained. Basically, it’s like we are driving a car and have one foot on the brake and one foot on the gas.”

In Mr Peralta’s analogy, the foot on the accelerator is the combined efforts of Languages Canada and educators across the country to promote Canada as a leading destination for language study. The “brakes” are being applied, however, by recent changes in government policy that have limited work opportunities, including co-op placements, for language students.

New regulations for Canada’s International Student Program (ISP) were introduced early last year and came into effect in June 2014. Under the new regulations, all international students with a Canadian study permit (that is, a student visa) are now automatically authorised to work off-campus for up to 20 hours per week during their studies.

In order to trigger these provisions, however, the student “must be pursuing academic, vocational or professional training of six months or more that leads to a degree, diploma or certificate at a designated institution.”

Co-op placements are also affected under the revised regulations. Whereas any international student could have applied for a co-op work permit previously if a co-op placement was an integral aspect of their programme of study, the new regulations stipulate “only international students who are pursuing studies at a secondary school or at a designated institution may apply for a co-op work permit.”

A major implication of these changes, therefore, is that work rights no longer extend to students enrolled in language study. “It is mystifying that language students are not allowed to work in Canada while others are,” adds Mr Peralta. “There is no good reason for the policy and we are seeking to have it changed.”

Whatever its rationale, the apparent effects of the policy are profound. Before last year’s regulatory changes, co-op programmes were commonly offered by language schools in Canada, and Languages Canada has previously estimated that as many as 15% of the country’s language students were enrolled in such programmes when the new regulations were introduced in 2014.

Canadian language providers have responded by partnering with other institutions to offer students pathways to further study or co-op options. In some cases, such as ILAC’s School of Service Excellence (first opened in 2014) or ILSC’s Greystone College (established in 2002), language centres have also opted to either open or expand their own career college programmes in order to provide ongoing co-op and workplace training options.

Canadian language schools are also responding by opening new markets, and, in particular, by targeting marketing activities to focus on priority target markets. Russia, Spain, Kazakhstan, China, and Vietnam were all the subject of collaborative trade missions in 2014, as was Brazil where Languages Canada has also entered into a Memorandum of Understanding (MoU) directly with the state of São Paulo.

These efforts have resulted, on average, in a 16.8% increase in enrolment from targeted markets and have begun to have a noticeable effect on the composition of the international student body in Canadian language programmes.

In 2014, and for the first time ever, Brazil became the number one source of language students in Canada. Other leading markets for 2014 include Japan, China, South Korea, and Saudi Arabia. The following table provides an overview of the top ten markets in each of the past five years. 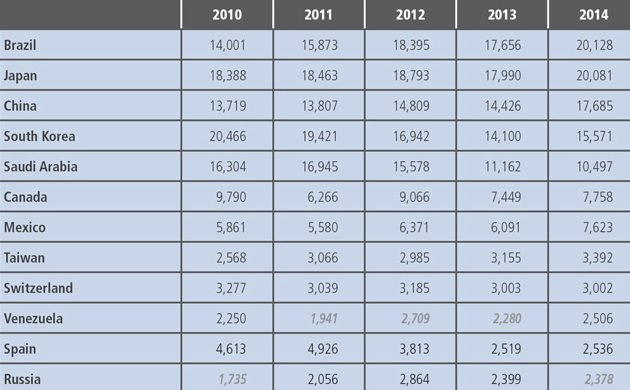 The top ten sending markets for Canadian language programmes, 2010-2014. Source: Languages Canada. NB: Numbers in grey and italics indicate cases where the country in question was not a top ten sender in that year.

The Languages Canada survey data also indicates that private-sector providers account for roughly three quarters of the total enrolment reported by member programmes in both 2013 and 2014.

Similarly, the average number of student weeks also remained consistent over the two years (at 11.9 weeks for 2013 and 12 weeks in 2014). In a related finding, Languages Canada also noted that the length of study remained stable in 2014, with nearly half of students studying in programmes of between four and 12 weeks. Reflecting the increased student numbers for 2014, the total number of student weeks booked grew by 6.58% to reach 1,652,697.

As for the changing regulatory environment for language students that we noted above, the visa status of language students in Canada shifted slightly in 2014. The following graph indicates the proportion of enrolment by visa type:

“For the first time, the number of students entering as visitors was higher than the number of students on study permits,” says the survey report. “The loss of students from language co-op programmes, which are no longer legal under current federal regulations, and the uncertainty engendered by the designation process are likely the biggest factors contributing to this decline.” The report then forecasts:

“We foresee the proportion of students will likely decrease further in 2015 as students who are currently completing co-op programmes are phased out.”

The report has a great deal more to say with respect to enrolment in both English and French language programmes in Canada. We will close our summary today, however, with some final figures on the estimated economic impact of foreign students engaged in language studies in Canada.

Indeed, this is likely to be a conservative estimate of the actual pathway effects of Canadian language training providers given the relatively high proportion of private-sector enrolment reflected in the survey data.

Even so, Languages Canada calculates the economic impact of language students in Canada at CDN$1.485 billion (US$1.21 billion) for 2014, including CDN$900 million in direct spending on tuition and other expenses, CDN$335 million in pathway enrolment, and CDN$170 million in tax revenue.