Canada has just published revised regulations for its International Student Program (ISP), effectively concluding a process of consultation and regulatory reform that had unfolded over the past year. The new regulations will come into force in June 2014, but the process through which they will be implemented is less clear.

The major change under the amended regulations is that only students enrolled at designated institutions in Canada will now be able to apply for a study permit (that is, an international student visa).

Importantly, each province or territory in Canada will now be responsible for designating which institutions are eligible to receive international students. So far only British Columbia, Canada’s westernmost province and a leading destination in the country for international students, has formally announced its intentions with respect to the designation process:

“Effective June 2014, all British Columbia post-secondary institutions wishing to host international students with study permits will be required to have Education Quality Assurance (EQA) designation. Schools and institutions will have until 31 December 2015 to achieve the EQA designation.”

The EQA is a quality assurance mechanism specific to British Columbia, and it is the only such designation in Canada. The process by which institutions will be designated in other provinces or territories is not yet clear, but – as the BC example suggests – the development and implementation of processes for designating institutions will likely extend well beyond the June 2014 implementation date for the new regulations.

Similarly, the Canadian government anticipates an extended “grandfathering” period for international students enrolled at non-designated institutions as of June 2014. An accompanying news release notes, “Study permit holders who are studying at a non-designated institution when the new regulations come into effect will be permitted to complete their programme of study, up to a maximum of three years after the regulations take effect.”

The second major change under the new regulations is with respect to opportunities for international students to work in Canada during their studies. Under the new regulations, all international students with a Canadian study permit will now be automatically authorised “to work off-campus for up to 20 hours per week during the academic session and full-time during scheduled breaks without the need to apply for a separate work permit.”

In order to trigger these provisions, however, the student “must be pursuing academic, vocational or professional training of six months or more that leads to a degree, diploma or certificate at a designated institution.”

Co-op placements will also affected under the revised regulations. Whereas any international student could have applied for a co-op work permit previously if a co-op placement was an integral aspect of their programme of study, the new regulations stipulate “only international students who are pursuing studies at a secondary school or at a designated institution may apply for a co-op work permit.”

A major implication of these changes, according to the definitions provided by Citizenship and Immigration Canada (CIC), is that work rights will not extend to students enrolled in language study.

The Regulatory Impact Assessment Statement accompanying the amended regulations notes that, “Regulatory changes to limit an international student’s authorisation to work off campus and/or in a co-op/internship programme to students studying at a designated educational institution in an academic, vocational or professional training programme were strongly opposed by Languages Canada and the language school industry, as students at language schools do not meet these requirements.”

In CIC’s view, however, “access to the Canadian labour market by international students should be refocused to align with their eligibility to remain as potential immigrants once educational credentials have been completed… Students focused on language acquisition programmes generally undertake short-term studies and are often not equipped with the language skills to make a meaningful contribution to Canada’s labour market, nor are they eligible to stay in Canada based on their language credentials… CIC is therefore refocusing work permit access for international students to better support the objective for which these programmes were originally designed – providing international students with opportunities to gain valuable Canadian work experience, which could in turn help eligible students meet the requirements to stay permanently in Canada.”

Needless to say, CIC’s perspective on the nature of language studies, particularly in relation to further studies in Canada, differs from that of the Canadian language training industry. Gonzalo Peralta, the Executive Director of Languages Canada, noted in a recent interview with Study Travel Magazine, “We are astounded that language study is not considered ‘academic’. It is the strategic starting point, it is impossible to work and study if you don’t have language skills.”

Mr Peralta confirms as well that Languages Canada, the country’s peak body for language training, will continue to lobby the government on the issue.

The following table provides a full summary of the confirmed changes from a 12 February 2014 government news release. 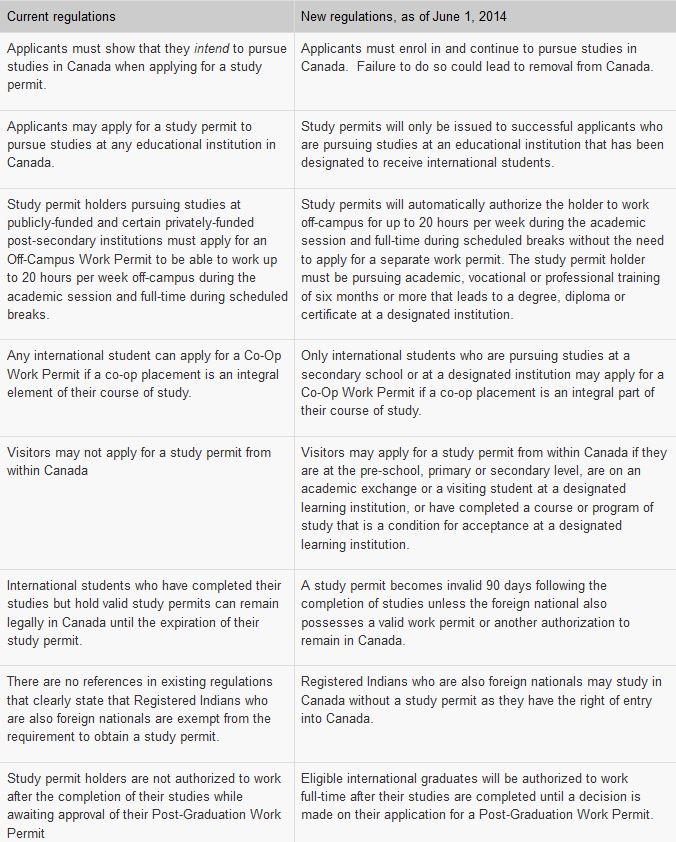 A stronger system for the future

As we noted in our earlier report on the then-proposed regulatory changes, the Canadian government is introducing these new regulations with the goals of establishing improved protection for students, greater accountability in the visa system, and prevention of fraud. The government notes in its recent regulatory statement, “In conjunction with current non-regulatory measures, regulatory amendments will enhance the integrity of Canada’s [International Student Program] by reducing fraud and ensuring Canada remains a destination of choice for international students seeking a quality education.”

The government impact statement also anticipates a modest decrease in international student entries to Canada in the first year of implementation in 2015, noting, “This will be in part because non-genuine international students may be deterred from applying to study in Canada as a result of stricter rules, or because students undertake short-term studies as visitors if the institution to which they have been accepted has not been designated to receive international students.”

The statement goes on to note that, “After the initial year, however, international student entries to Canada are expected to increase, given that Canada will be a more attractive study destination as a result of both new facilitative measures and the ability for institutions, provinces and territories, and [the Canadian government] to market a quality Canadian education experience with greater confidence. It is also expected that there may be, over the longer term, an increase in approval rates and processing times for study permit applications, given increased confidence on the part of CIC officers regarding the educational institutions to which students are destined.”