Results from the 2015 installment of the ICEF i-graduate Agent Barometer are now in, and this year education agents’ responses are significantly different in some areas than in 2014 and previous years. The Agent Barometer is the most comprehensive survey of education agents regarding their perspectives on demand for international education around the world; challenges and barriers relating to student mobility; and the most effective institutional marketing tactics. This is the ninth year in a row the survey has run, and it now provides a wealth of multi-year trend data.

The 2015 survey ran for three weeks during October, with 1,671 agents from 110 countries responding. The survey response was widely distributed by country with only four countries – India (10%), Brazil (9%), Nepal (6%), and Russia (6%) – accounting for more than 5% each of the total response.

Regarding the number of students agents said they place in education institutions on an annual basis:

Three-quarters of agents said they “always” have contracts in place with education institutions, and 22% said they “sometimes” do.

Recruiting for language, work and travel, and online up this year

Over half of agents said they recruit for vocational programmes (51%), secondary/high school (54%), certificate/foundation courses (54%), pre-masters/post-graduate qualifying programmes (55%), and diplomas (57%).

Agents are also citing work and travel programmes much more often than last year: 24% are now recruiting for this type of programme versus 14% in 2014, and surpassing 2013’s 18%.

Reflecting the continuing connection between study and work, three-in-ten (30%) agents are recruiting for internships this year, while 20% are now working to place students in university-level online/distance learning courses – a dramatic rise from just 5% in 2014.

Altogether, the responding agents reported placing 297,488 students, down from 360,065 students in 2014. Relative to reported placements for 2014, the only upward trends among this year’s sample were modest increases in placements for language courses and online/distance. Agents noted that MBAs and post-graduate courses currently are the most popular degree areas for students considering online programmes, with business-related studies by far the most common area of interest. 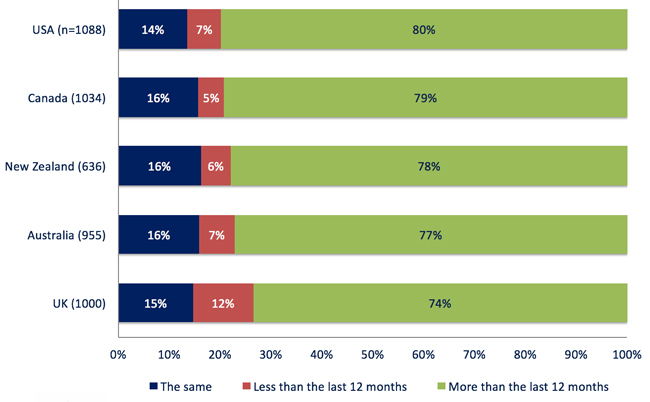 In terms of emerging destinations, more than half of responding agents expect they will refer more students to Malaysia, Singapore, China, and South Korea.

In 2014, agents’ perceptions of the best destinations for various programmes were stable in relation to survey results from 2012 and 2013. Not so much this year. Canada is now ranked #1 for several types of programmes – a first.

More than half also reported that financial difficulties (55%) and difficulties with language (53%) are the main concerns for students and parents pre-departure. Personal safety and difficulty with accommodation were also noted fairly frequently (41%) but slightly less than last year.

Agents say parents and students’ concerns about financial difficulties, personal safety, and language difficulties fall after students arrive in their destination countries, but that concerns about accommodation do not fall as sharply.

This pattern is reflected in the following graphic. It highlights that while concerns with respect to finances or language ability quickly subside after arrival, concerns about cultural difficulties climb sharply. This is an interesting finding that carries some important implications in terms of the need for additional pre-departure orientation and/or post-arrival supports for cultural shock or for otherwise assisting students in adapting to their new cultural context. 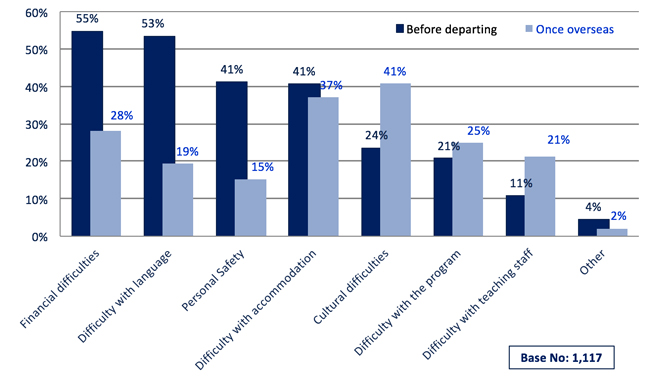 Looking at tracking data from previous years of the survey, the following trends emerge regarding student mobility concerns:

Visa difficulties less of an issue

The countries most likely to be cited by agents as having caused visa difficulties are:

This year, agents consider marketing and visits to local schools/colleges as well as institutions participating in in-country exhibitions (50% “very important”) the top promotional tactics for educators. Last year’s top choice, individual institutional brochures, moved to second place (45%). School/college profiles in the agency’s own brochures or handbooks was a close third (43%). Online marketing tactics placed lower down the list, and like last year, giveaways were rated as the least attractive tactic.

Even more than previous years, agents value quick response times to enquiries and applications from educators: compared to 78% in 2014, this year 93% said it was important, along with 74% “very important” and 19% “important.

This year’s survey also measured the appeal to agents of special marketing packages and offers. In that respect, financial support schemes (including scholarships and bursaries) and guaranteed entry to specific education programmes drew the strongest response. In both cases, 55% of respondents rated these types of offers as “very important”. As the following chart illustrates, 24-hour turnaround on admissions documents was close behind at 51%. 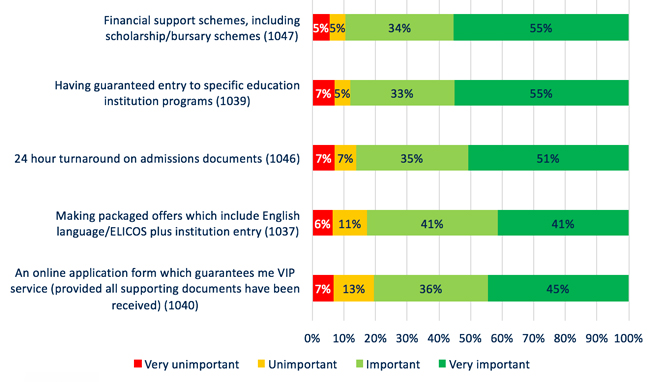 A further set of questions exploring marketing supports related to people and staff found that student leads (provided by the institution to the agent) and a local support office were among the top ranked items (with 45% and 46%, respectively, rating these as “very important”). 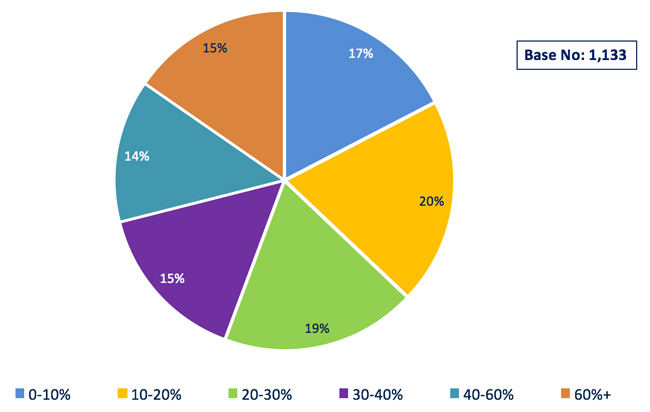 Last year, the big story stemming from the Agent Barometer was Australia’s impressive rebounding from years of enrolment declines, thanks in large part to streamlined visa processing and a collective marketing effort among Australian providers and agents.

This year, things are more fluid. Not much has changed in agents’ overall estimation of which traditional destination countries are the most attractive, but there is definitely movement when we look more specifically at programmes.

Beyond that competitive balance, there are a number of overall trends educators might pay special attention to in this year’s Agent Barometer, including the following:

As these results suggest, this year’s survey finds an optimistic industry with a strong outlook for further growth. The survey responses underscore the importance of the constants in our industry – first and foremost, strong working relationships and quick response times.

But they point as well to the changing landscape of international education. Through the eyes of the responding agents, we also see the growing influence of emerging study destinations and the increasing impact of online programmes and web-based marketing. Change is the constant again this year, and we will continue to track these important trends in the 2016 edition of the Agent Barometer.