Australia’s international education sector has now booked a solid two years of good news. After a few years of decline from the high water mark of 2010, the Australian industry’s fortunes began to turn in 2013. Relatively modest improvements that year gave way to double-digit growth in 2014, notably with respect to English language training and student commencements – both of which are key to longer-term, stable growth for the future.

And now preliminary figures from the Australian Bureau of Statistics (ABS) show that international education exports reached a record-high of AUS$18.1 billion (US$13.14 billion) for the 2014/15 fiscal year. This represents a 14.2% increase on the AUS$15.9 billion recorded for the previous year, and secures the sector’s position as Australia’s fourth-largest export industry, after iron ore, coal, and natural gas. It is also the country’s leading services export sector, surpassing even Australia’s noted tourism industry by several billion dollars.

“I’m delighted with these figures,” said Minister for Education and Training Christopher Pyne. “International education is a major employer – the sector supports around 130,000 Australian jobs across our cities and regions… The Government will continue to work to ensure that international education continues to be a major contributor to the growing strength of the Australian economy and job creation well into the future.”

On that note, the latest estimates will now also nicely set the stage for a second major consultation with international educators that the Minister is hosting in Canberra this week.

“Mr Pyne is strongly backing the international student boom and is developing a national strategy to ensure it is sustainable,” says The Australian Financial Review in reference to the Minister’s recently released Draft National Strategy for International Education. “He has led the first cross-portfolio approach to the industry, recently setting up the International Education Coordinating Council, which includes several ministers as well as industry representatives.”

Deputy Chief Executive of Universities Australia Anne-Marie Lansdown said of the upcoming roundtable and the work to complete the national plan: “In finalising this vitally important strategy, we must ensure that the regulatory and policy settings supporting international education are sufficiently robust to continue delivering quality but not so onerous as to prevent innovation.”

All signs pointing up

The Australian Department of Education and Training has also released its international enrolment data for the first half of 2015, and there again the story is one of continuing, strong growth.

As of year-to-date June 2015, there were 464,787 international students studying in Australia on a student visa. This amounts to a 10.4% increase over the same period for 2014, and compares very nicely with the average YTD June growth rate of 5.3% over the previous decade.

There were 198,347 commencements – that is, students beginning their studies in Australia – as of YTD June 2015, representing a 7.2% increase over the same period for 2014 and once again tracking ahead of the ten-year average for commencements in the first half of the calendar year. 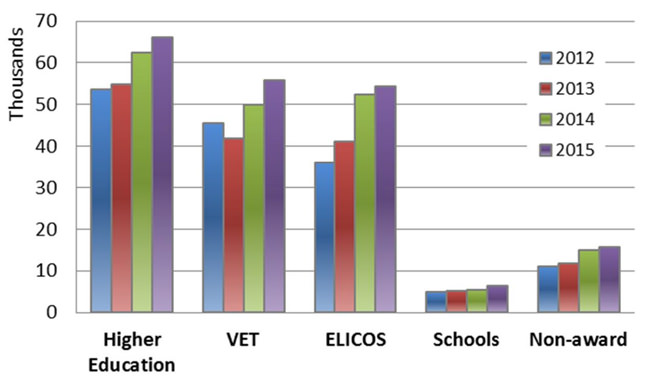 The higher education sector remains home to the lion’s share of international students in Australia, with just under 48% of total enrolment YTD June 2015. Vocational Education and Training (VET), meanwhile, accounted for 24.8% and the ELICOS segment (English Language Intensive Courses for Overseas Students) sector 18.9%. The VET segment showed the strongest overall growth for this first half of this year, with 15% more students compared to the same period for 2014. K-12 schools, however, saw strong growth in terms of commencements with an 18.4% increase in new students YTD June 2015.

The nationality mix of Australia’s enrolment base is largely unchanged in the first half of the year: China, India, Vietnam, and South Korea are the top four sending markets, with Thailand and Malaysia taking turns at rounding out the top five. Thailand rotates in to the #5 spot for the YTD June 2015 figures, with those leading five source markets representing more than half of (51.1%) of all international enrolment in Australia (and China alone accounting for nearly 27% of all international students in the country).

The same concentration of sending markets is found in the Australian government’s final export data for 2014 where we see that the top five sending markets (with Malaysia now having its turn in the #5 spot) contributed just under half of total export revenues for the year.

Fittingly, the government data also shows that it was in the 2014 calendar year – as distinct from the fiscal year data we considered earlier – where Australia surpassed its previous record year of 2010. “Education-related personal travel” (that is, revenues from international students enrolled in Australia) accounted for 96.7% of Australian education exports in 2014. Total student-related revenues for 2014 have been calculated as AUS$17 billion, marking a solid gain over the previous high of AUS$16.1 billion from 2010. 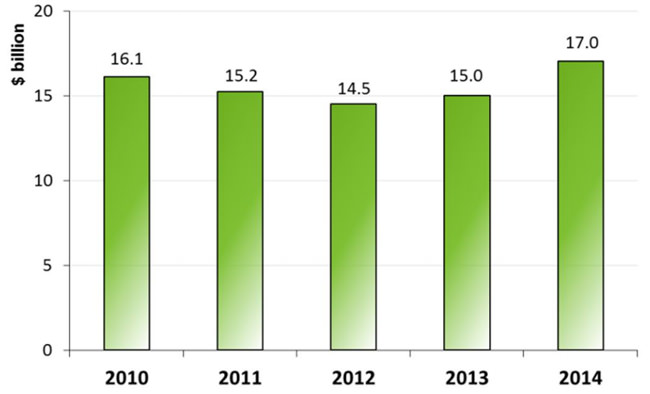 These latest figures place Australia as the third-largest education exporter in the world, after the US and the UK. The government’s and industry’s clear determination to further strengthen Australia’s position as a major international study destination will no doubt continue to build on this strong showing in the years ahead.