The results from the 2014 installment of the ICEF i-graduate Agent Barometer – the most comprehensive survey of education agents regarding their perspectives on the international education markets – are in. This is the eighth year in a row the survey has run, providing a wealth of multi-year trend data.

The 2014 survey ran for three weeks during October, with 1,065 agents from 104 countries responding.

Most (82%) of the agents who took part in the survey are in senior positions (59% are directors/owners, 23% are managers), and most (69%) work in small-sized companies of 10 or fewer agents. The biggest proportion represent between 2 and 20 institutions (35%), but a significant 19% of respondents represent over 100 institutions each.

Close to 4 in 10 (37%) agents said they place between 51 and 200 students in institutions annually, while 32% place less than this and 32% place more. Nearly three-quarters (73%) said they always work with contracts in place with institutions.

The most common type of study for which agents recruit is language courses (70%), with undergraduate and postgraduate right behind with 68% each. Next are university foundation courses (47%), MBA programmes (45%), and secondary/high school (41%). Just over a third of agents said they recruit students for vocational/further education programmes, while 18% recruit for work & study (down from 26.1% in 2013) and 14% recruit for work & travel programmes (down from 17.7% in 2013). Five percent recruit for online learning.

A majority of responding agents indicated they expect to refer more students in 2015 across all levels of study, with undergraduate and MBA programmes expected to be the biggest beneficiaries (84% each) followed closely by postgraduate (81%).

More than half of agents said that financial difficulties (57%) and difficulties with language (60%) are the main concerns for students and parents pre-departure. Close to half also mentioned personal safety as a concern (48%) and difficulty with accommodation.

Importantly, agents noted far less concern among parents and students about financial difficulties, personal safety, and language difficulties after students had arrived in their destination countries. Concerns about accommodation do not fall as sharply. 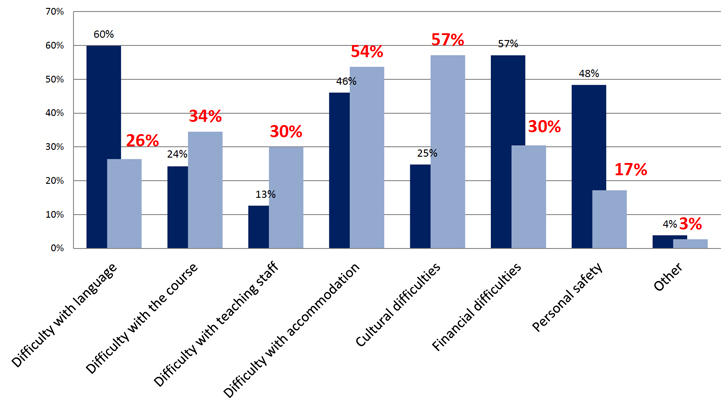 The countries most likely to be cited by agents as having caused visa difficulties are:

By contrast, only 27% mentioned Australia in this regard (compared to a much higher proportion of 43% in 2013), and 12% did for New Zealand.

Interestingly, and particularly given an increasing emphasis on online channels in international recruitment, agents continue to place a premium on effective print materials for promotion.

Individual institutional brochures are considered by 53% of responding agents to be “very attractive” promotional materials for institutions, with information seminars for parents and students next (49%), and marketing and visits to local schools/colleges in third at 40%. Agents deemed the least attractive promotional tactic to be giveaways. 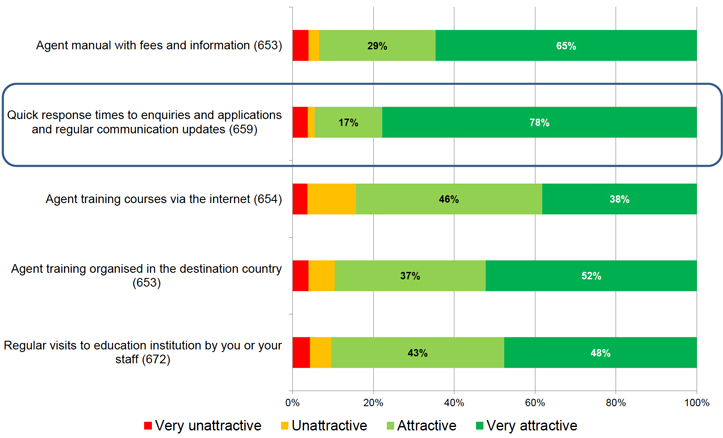 Agents’ perceptions of the best destinations for various programmes are stable in relation to survey results from 2012 and 2013: 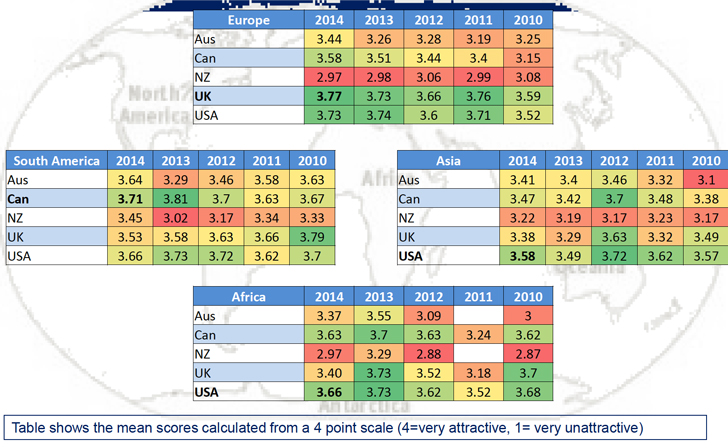 New insights into how agents work

The 2014 survey featured a number of first-time insights arising from new questions this year, including the following:

Australia on the upswing, perhaps thanks to visa reforms

When we look at the popularity of destination countries, it’s interesting to note the big drop in agents reporting visa difficulties in association with Australia (27% reported visa hassles in 2014 versus 43% in 2013). Earlier this year we also reported that Australia reversed its three-year enrolment decline in 2013, and that May 2014 data showed continued strengthening in terms of enrolments.

Perhaps not coincidentally, at the end of 2013 the Australian government began easing visa rules for the non-university sector and generally reassuring the international higher education sector that it would receive more attention and support from the government.

Australia aims to host as many as 660,000 students by 2020, with particular focus on Asia as a source region and more emphasis on emerging markets.

An extended Powerpoint report for the 2014 ICEF i-graduate Agent Barometer will be available in January 2015. Please consult the project webpage or contact i-graduate for more information.