The enrolment funnel: Better results start with the prospects you already have

The pool of prospective students is getting larger all the time for many schools and institutions. The Internet appears to be a big factor in this trend, in that it makes it easier for students to file queries – via online forms, social media, or simply by email – with a number of schools at once. Similarly, online application processes, including central application systems that allow students to apply to a number of institutions, are making it easier for prospects to file a wider field of applications.

The web is now home to a vast amount of information about where and how to study, and that has given rise to a new prospect category in many admissions systems: the so-called “stealth applicant.” These applicants remain anonymous until the point of application, and so outside of the tracking, filtering, or communications processes of the institution or school. Some of these stealth prospects may simply prefer not to opt in to more formal enquiry processes that would allow the school to contact them. Others are simply able to find the information that they need online up to the point of application.

These factors are combining to leave many schools and institutions struggling to manage and qualify a growing pool of prospects. There are also indications that these same factors are contributing to declining yield rates – that is, the number of enquirers or applicants who convert into actual students.

Have you checked your funnel today?

This is an important trend for any educator or education marketer, one that carries profound implications for marketing and recruitment strategy as well as enquiry and admissions management. It is also challenging traditional ideas around managing the enrolment funnel (or sometimes “recruitment funnel” or “admissions funnel”).

As the term suggests, the funnel is a way of imagining and managing the process of advancing students from a (relatively large) pool of prospects through several key “conversions,” such as enquiry, application, admission, and, if all goes to plan, enrolment. 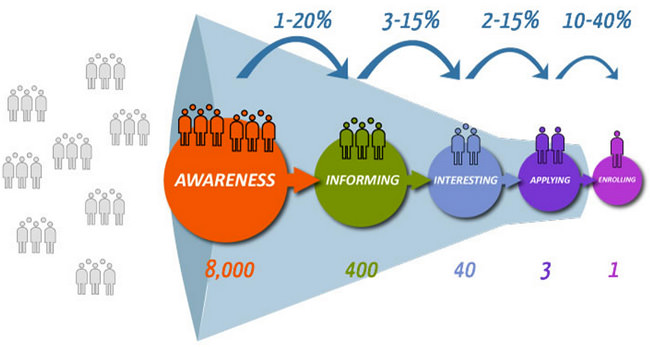 An illustration of the funnel as prospective students move through various orientations to the institution or school, from basic awareness to enrolment. Source: StudyPortals

As the illustration above reflects, one of the characteristics of the funnel is that some percentage of prospects will drop off at each conversion point. Not all prospects will make an enquiry, fewer still will apply, and so on. The traditional approach, therefore, to boosting enrolment is to attempt to increase the number of prospects in each stage of the funnel or to try and improve conversion rates from step to step (or some combination of the two).

The funnel is a powerful metaphor for imagining and managing those linked admissions and recruitment processes, but the model has been subject to critique as well. Some have suggested, for example, that traditional thinking around enrolment funnels encourages an undue emphasis on moving students from one stage to the next, and a greater focus on loading the top-of-funnel prospect and enquiry stages, as opposed to a more strategic focus on enrolment.

The funnel model also suggests a more linear path than is true for many prospects. Some students will stay at one stage longer than others, and not all enquiries reflect the same level of interest, timeliness, or suitability for admission.

“The traditional funnel paradigm tends to view developing and communicating with the prospect pool as a one-and-done event, rather than a process,” says a 2009 white paper from Noel-Levitz. “The prospect response rate (from search to inquiry) became the primary mechanism for evaluating the quality of the prospect pool, and the focus on moving students from one stage of the funnel to the next led institutions to discard high-quality prospects who didn’t respond to the initial marketing contact.”

These critiques are important, particularly to the extent that they lead to improved practice. As educators and marketers continue to adapt to changing prospect behaviour around enquiries and admissions, here is a quick summary of some emerging strategies for improved funnel management.

1. Embrace the nuance. There is not just one funnel, there are many. Some students will enter at the prospect stage, others will begin with an enquiry, and, in the case of “stealth applicants,” some will join at the application stage.

More nuance still: each prospect can and should also be tracked by source – that is, the channel by which they came into the funnel. Some enquiries may come through the institution’s website, other prospects will be identified at education fairs, or via agents. Each prospect source will have its own characteristics, and over time each will reveal its own trends for conversion and yield rates as well.

2. Qualify prospects. Participants in a recent NAFSA conference panel spoke convincingly about the challenges of managing growing pools of prospects and enquiries. The panel was diverse and included educators from the US, Australia, and the UK, but all agreed that grading prospects – measuring their interest and suitability as applicants at the earliest possible stage – was a key aspect of managing the enrolment funnel.

This need not be a complex or onerous process. Did the student write to several institutions in a single email? Does the entire message consist of a request for scholarship assistance? Put those in the “low grade” prospect bucket. Did the student write only to you, ask good questions, and demonstrate some knowledge of your programmes? If so, he or she is more likely to be a higher value prospect.

Once an institution segments its prospects in this way, it can then better target communications to each prospect category. More to the point, it can concentrate limited staff and marketing resources on those segments that are likely to generate the highest conversions (to the next stage of the funnel) and yields (conversion to enrolment).

3. Go for engagement. Funnel communications strategies should be designed to encourage and strengthen prospect engagement with the institution. High-quality prospects (which will have been identified by your grading or segmenting process as above) are a tremendous asset for any institution, and also a great place to start when building engagement across the funnel and in any effort to improve actual enrolment numbers.

“Communication strategies traditionally used for enquiries can be quite effective with prospects, such as inviting prospects to campus, sending them information on outcomes for students, or mailing them an application instead of waiting for them to request one,” adds Noel-Levitz.

4. Use the data. Most institutions have the data they need to make better enrolment management decisions across the funnel but not everyone uses it. Interestingly, the more nuanced strategies for funnel management that have emerged in recent years have also given rise to new metrics that aim to more precisely and appropriately track conversions and yields.

The following illustration from Noel-Levitz, for example, argues for a recalculation of enquiry conversions that factors out stealth applicants. Similarly, it highlights the distinction between incomplete and complete admissions files when tracking conversions from “applied” to “admitted.” By not making these adjustments, the argument goes, conversions in both cases can be overstated as the conversion rate will have more to do with the percentage of stealth applicants in the prospect pool or the proportion of incomplete files in the admissions pipeline. 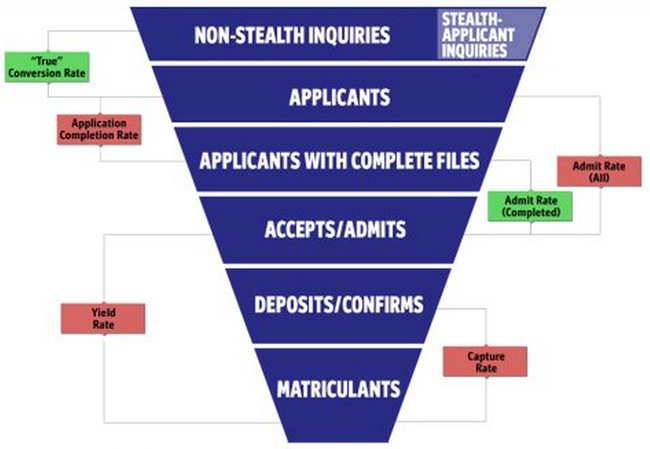 A 2013 white paper, also from Noel-Levitz, makes a strong case for carefully compiling a wide range of funnel metrics and for monitoring present-day conversion rates against three to five years of comparative data. The following table illustrates how these recent-year trends can be used to track progress against goals for the current year. 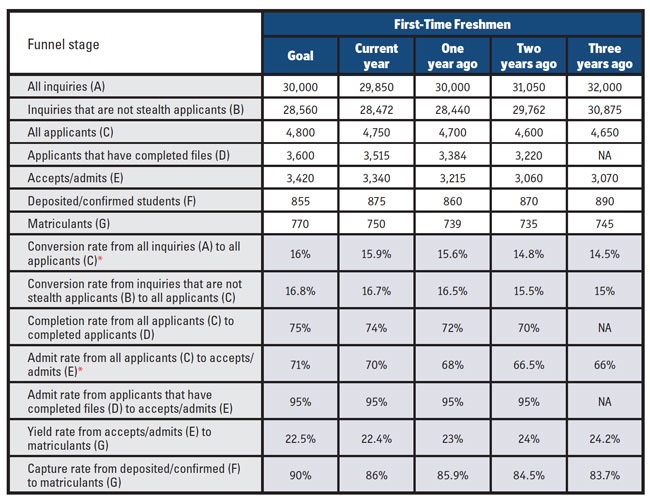 “With the above data set in hand, one can project fall enrolment and yield by monitoring and comparing each target group’s rates of movement toward enrolment each week of the recruitment cycle,” notes the white paper. “This also highlights the need for targeted interventions. For example, groups of students who are moving slowly from admit to matriculant (the yield rate) require different interventions than those who are converting slowly from inquiry to application.”

This marriage of data and careful segmentation of prospects connects to a related idea – predictive modeling – that we have explored in the past and that we would flag for any readers who would like to have additional background on the subject.

What it all means

The clear implication here, and perhaps the most profound aspect of enrolment management-by-funnel, is that such models encourage institutions to focus their marketing and recruitment resources where they can have the greatest impact. Many marketing efforts are heavily weighted to the top of the funnel and to driving awareness among prospects via mass marketing efforts.

What the more nuanced funnel concept that we have considered here illustrates is that the real key is converting that initial interest (and each subsequent phase of engagement) into actual enrolment.

“Placing too much of a focus on promotion is a common mistake,” says Tim Copeland, managing partner of the enrolment marketing firm DemandEngine. “What will make or break enrolment goals is how well those hard-earned enquirers are converted into applicants, registrants, or contracts signed. Consider this, in order to have the same impact on enrolment as a 1% increase in conversion rate of enquirers to applicants; it would likely take a 5-7% increase in response rate (prospects to enquirers). That is how the funnel works.”