What’s the most popular social network in the world? Facebook – still Facebook. But GlobalWebIndex’s most recent tracking study (for Q3 2014) on social networking behaviours and engagement levels across 32 markets shows that:

The GlobalWebIndex study sample is representative of more than 90% of the global Internet audience, with quarterly sample sizes of more than 40,000 Internet users.

This ICEF Monitor post will focus on the key findings of the report, as well as consider the implications for educational marketers.

Facebook has the most users, but its growth is weak compared to other platforms

There is now a diverse set of social media brands offering users around the world platforms for communicating, whether through messaging, sharing entertainment or news, or exchanging photos and videos. Of these, Facebook is the clear leader in terms of current users. 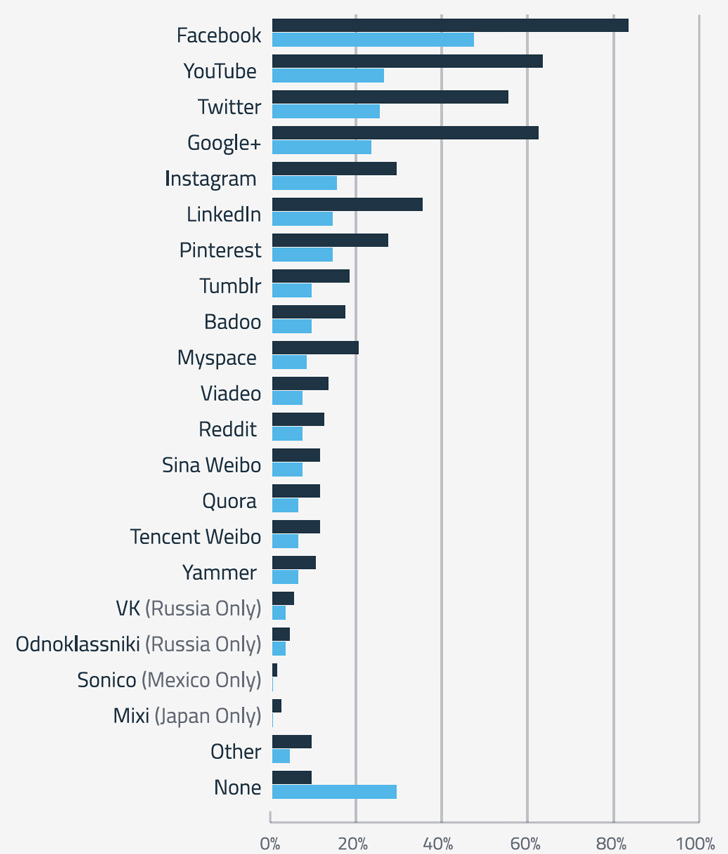 A staggering 1.35 billion monthly users are active on Facebook, which means that “over one-third of the world’s population is now on Facebook.” Outside of China, four in five Internet users have a Facebook account (93% in Latin America); half of these say they are active users (defined as those who have actively contributed to or used the platform in the past month); and more than half are logging in more than once a day.

But Facebook has some major challenges as well. In the last six months, its user base grew by only 2%. Compare that to Tumblr, which grew by 120%, and Pinterest, which grew by 111%. Pinterest also dwarfed Facebook in its member base growth in the last six months: 57% versus 6%. These relative growth rates for the various platforms are also reflected in the growth in usage of leading social and messaging apps over much of 2014, as reflected in the chart below. 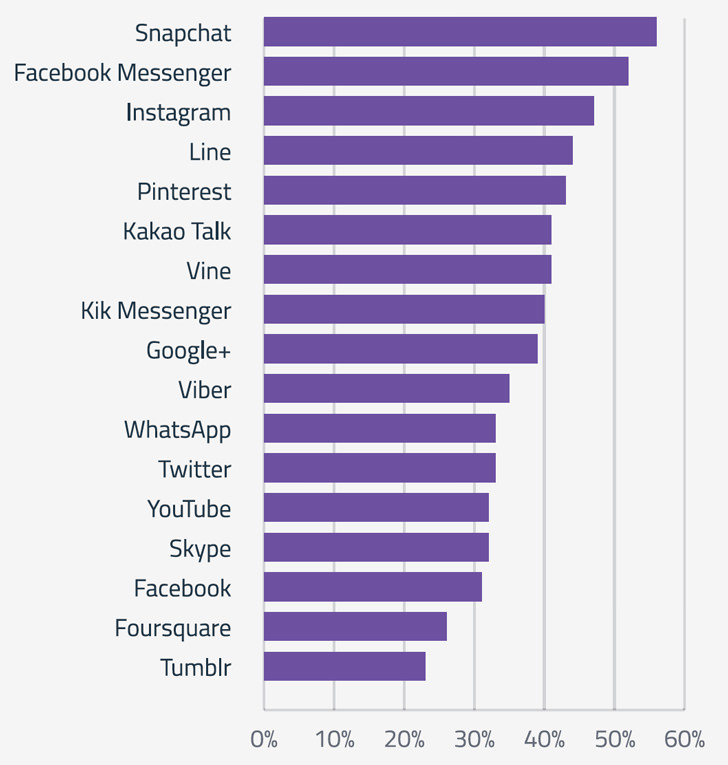 YouTube remains a key platform on which educational marketers should have a presence: 85% of online adults visit it each month, ahead of Facebook’s 76%. There are of course variations by global region and the following chart provides a broad illustration of regional penetration, in terms of membership and active usage, for some of the leading social networks. 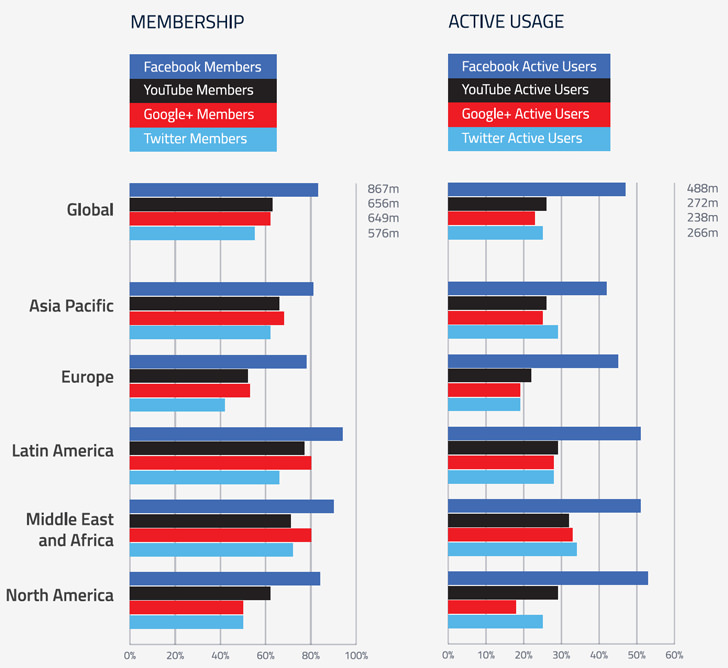 The report zeroes in frequently on the important youth demographic so coveted by social media networks. Here, Facebook is having trouble. Active usage among 16-24-year-olds on Facebook declined during 2014. It fell only by -0.5%, but it still fell – while active usage among this demographic rose substantially for all the other networks studied. In addition, half of respondents in the US and UK reported using Facebook less often (64% among teens). Cited reasons for less frequent use include:

For educational marketers, the 16-24-year-old demographic is naturally attractive given that it coincides with a student’s typical age range, so Facebook’s challenges are obviously noteworthy.

By contrast, the study found that Tumblr and Instagram have the youngest audiences. More than 70% of users on these platforms are aged 16-34.

“It’s the relatively young, affluent, and urban audiences in emerging Internet nations which are embracing networking the most enthusiastically – showing why digital investment decisions should not be based solely on national Internet penetration rates.”

Snapchat posts major gains in the mobile share of market

In mobile, there is a tight race going on between the front-running mobile apps. Facebook once again claims the lead, with 43% of study respondents using its app. But Snapchat, the photo sharing app where users exchange photos that disappear after a few seconds, is posting the fastest growth rates (up 56% since the beginning of 2014), and its main demographic is teens and youth in their 20s. Very close behind are Facebook Messenger (the messaging app Facebook recently separated from its main general-use app) and Instagram.

For educational marketers, Snapchat is definitely one to watch. As the report says:

“The highest usage rates among this audience coming in key markets such as the UK, Canada, the USA and Australia (where the figures range from 25-40% among online teens, often putting Snapchat ahead of Facebook’s messaging apps).”

Snapchat initially got a questionable reputation because it was thought to be mainly used by teens “sexting” (sending naughty pictures of themselves to each other). But a recent University of Washington study shows that Snapchat’s popularity is more accurately explained by one thing: it’s fun. According to the study, the most popular classifications of photos users shared were “funny things,” “myself,” “people,” and “what I’m up to.” There are therefore ways for educational institutions to leverage Snapchat, for example in contests, promotional discounts, and providing “sneak peeks” of new and exciting brand offerings.

For example, this case study, featured on the ClickZ marketing news website, focuses on a sector outside of educational marketing, but it’s easy to see why it is relevant and how it might stimulate ideas for educational marketers as well:

“A 50-store frozen yogurt chain called 16 Handles did the first recorded Snapchat promotion in January of this year. Consumers were asked to send a snap of their yogurt purchase to the company’s Snapchat account. The company would send them back a snap that functioned as a point-of-sale coupon ranging from 15% to 100% off a purchase. The catch? Because snaps disappear, the customer has to use the coupon immediately (she can’t forward it to 1,000 friends or post it online). When the customer presents the snap to the person at the register, she finds out how much money off she gets. She also must commit to the purchase (thus having something to take a picture of) before finding out how much she’ll save. The snap acted like a scratch-off ticket and held the twin benefits of immediacy and surprise.”

Some new insights on China

As we have known for some time, Chinese are heavy users of social media platforms. But because of official government blocking of major platforms such as Facebook, Twitter, and YouTube (platforms many Chinese are nonetheless still able to access by using VPNs [Virtual Private Networks] or proxy servers to get around firewalls), Chinese social media use has been difficult to measure. The GlobalWebIndex study did survey Chinese Internet users, however, and the findings are fascinating.

For example, only 7% of Chinese Internet users reported not having a social media account of some sort, and only 14% were not active users of at least one social media platform. The report notes:

“Given the vast size of the country’s adult Internet population (rapidly approaching the 500 million mark), the number of social networkers that these figures represent is colossal.”

But contrary to popular assumptions, significant proportions of Chinese are also on the major global platforms. For example: 39% are on Google+, 36% are on Facebook, 29% are on Twitter, and 26% are on YouTube, which they access primarily via VPNs (over 90 million Chinese have used these) and proxy servers.

The report concludes that all of the major social media platforms have significant user bases in China.

Implications of the findings for educational marketers

Never has it been more important to consider more than one platform to connect with students. Facebook is still important, but more and more, younger people are using a diversity of platforms to fulfill their social, informational, and entertainment needs. Students may have a Facebook account, but there is a growing possibility they are more active on other platforms such as Twitter and YouTube. Moreover, there is clearly growing interest, represented by member base growth rates, in image-based platforms (Instagram, Pinterest, Tumblr, and Snapchat). The report says:

“While Facebook is still the clear number one, it’s no longer the catch-all site it once was; in certain countries, and among certain demographics, other services now represent just as effective touchpoints in terms of reaching particular audiences (Snapchat and teens in many Westernised markets being a case in point).”

The report does caution, however, against investing less in and/or allocating lower priority to Facebook:

As this article demonstrates, there is ever more a need for a coordinated strategy regarding social media, one that includes but extends beyond the major platforms. As social media platforms proliferate, users are becoming more sophisticated and adept at using and managing more of them.

To conclude, we’ll point you to an excellent article on the website Business to Community with tips for institutions on using many of the most popular platforms, as well as to some of our own articles on social media:

We have also embedded the GlobalWebIndex Q3 2014 report on social networks below for easy reference.
GWI Social Report Q3 2014: