It can be easy to become overwhelmed with the latest thinking about social media marketing and to feel too busy to refresh our practices in the midst of all the other activities involved in recruiting international students. But it is also all too easy to not achieve the results you’re looking for by not adapting your use of social media platforms to best effect.

Today’s post is on Twitter: we’ll provide some of the most important new information that should guide you on how to use it in educational marketing, and we will include a focus on how to effectively use hashtags (the # device in tweets).

“China would be high on this list but doesn’t allow Twitter. There is, however, intense use of Sina Weibo, China’s Twitter-Facebook hybrid, which has over 100 million messages posted per day.”

Still, there are other reports that suggest there are in fact a substantial number of Chinese on Twitter due to proxy services that allow users to connect to servers outside of China.

In addition, Twitter is seeing significant growth in Indonesia, Saudi Arabia, and Singapore, and the service is very popular in Japan – bigger than Facebook and recently vying with Mixi, the country’s own popular social network, and newcomer Line.

Earlier this year, Twitter updated its mobile functionality to allow users to include up to four images per tweet. Interesting news indeed, as one study we wrote about last year found that:

Moreover, audience engagement with tweets with image links are reportedly 2x higher than those without them. 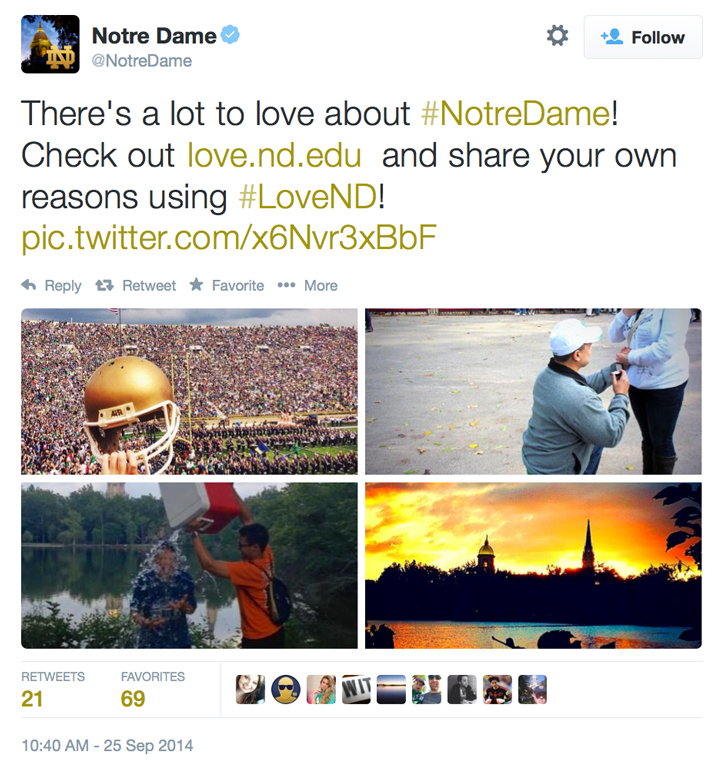 We know that images are a good idea in Twitterland, but what about hashtags?

As a refresher, a hashtag is the pound sign (#) placed in front of a word or a few words mashed together to create a short, searchable link (e.g., #elearning). This allows people to search Twitter for topics they find interesting, and see what others are saying about it. A hashtag (with enough relevant users) becomes a micro-discussion forum and a way that users can differentiate information they are looking for from more general feeds or Twitter streams.

The hashtag has been plenty ridiculed, most famously by Jimmy Fallon and Justin Timberlake, but as Steve Cooper, writing for Forbes, says:

“As ridiculous as hashtags might seem to marketing veterans who remember a time before Twitter and Facebook, the younger generation and potential customers/clients don’t. To them, using hashtags is as natural and common as typing their query into the search box.”

And Kevan Lee makes a key point on Buffer Social (a company that helps companies with social media management) regarding the potential of hashtags to reach markets beyond what you even hoped for:

“A hashtag will make your content viewable by anyone with an interest in your hashtag, regardless of whether they’re part of your clan or not.”

Mashable has a number of dos and don’ts regarding hashtag use, including:

In addition, research shows that:

Experts recommend against sticking to one hashtag forever without considering alternatives. Luckily, there is a growing field of tools for analysing and tracking hashtags, including one called Hashtagify that allows you to see the most popular hashtags associated with a tag you are already using. (See for example the Hashtagify tag maps for #studyabroad or #ESL.)

In addition, consider whether your hashtag is used by prospective students in their searches – and that you’re not just using industry jargon. Which hashtags are Indian students using to find graduate programmes, for example? Ask your current Indian students – and ask the agents you’re working with whose local knowledge could be quite useful here, including how to translate/adapt hashtags into particular languages.

As important as hashtags are in reaching the students you’re interested in, they are secondary compared to the most important rules of tweeting:

Remember that Twitter is not “push” marketing – the reason it is so effective is because, at its best, it is a conversation – one in which followers feel their engagement is appreciated and that they are listened to. Brand marketers – including educational institutions – should not pursue “reach” via hashtags and other means at the expense of really engaging with followers.

One common mistake is to try to piggyback on very popular campaigns and hashtags that are not really associated with your brand, a practice called “newsjacking.” There have been brands pushing newjacking practices to unsavoury extremes by piggybacking on hashtags related to tragic news stories. Here’s a fictional example of this for illustrative purposes, whereby an education institution interested in recruiting African students tweets something like:

(For readers not familiar with #bringbackourgirls, it is the hashtag used to spread public support for efforts to rescue Nigerian girls kidnapped by Boko Haram.)

There are far better ways to tell prospective students about an exemplary reputation for safety than abusing the hashtag of a well-meaning public advocacy campaign. Such a gross example of newsjacking would likely cost UniversityX many followers. The university could instead include a link to the study naming it in the top 10 for safety, as well as a link to an image from the study. This would be far more likely to be retweeted and engaged with by the university’s Twitter followers.

Even if newsjacking is relatively innocent, (e.g., using #fifaworldcup around the time your country’s team is competing), followers will quickly see through the tactic and be anything but impressed.

“On Twitter, we follow and engage with brands for the experience they provide (and because we love their products), not because they’re able to jump into every random conversation on the web. Focus on your brand experience, and always be cautious when an organic opportunity presents itself. You’re responsible for protecting your entire brand image, and maintaining your audience’s trust. Don’t take that lightly.”

Please see the following infographic for a quick summary of additional stats and tips.