International enrolment in Intensive English Programmes in the US fell by 10% between 2017 and 2018 (and student weeks by 13.7%) according to the new data from the Institute of International Education (IIE) presented at the NAFSA conference in Washington, DC, last week. The data was collected via the IIE’s annual Intensive English Programme survey conducted among 400 IEPs (both those within higher education institutions as well as independent centres) throughout the US.

Three years of decline, but decrease is less severe in 2018

The declines mark the third year of a downward trend in the US English-language training sector in the US. From a historic high point in 2015, IEP numbers in the US have declined by nearly 42% overall – and student weeks by 46% – through 2018.

In her presentation at the NAFSA conference, IIE Research Specialist Julie Baer noted that the rate of decline for US IEPs slowed in 2018. She also highlighted that year-to-year IEP trends tend to be more volatile than those in higher education, in part because English-language students are not committed to multi-year programmes. As a result, any changes in political or economic conditions in sending markets tend to be felt more immediately in the form of enrolment declines or increases and also in the number of weeks that students spend in a language programme.

The US data appears in a global context wherein trends for English-language training enrolments and weeks are quite mixed according to destination. For example:

Latin America the only growth region

The number of Latin American and Caribbean students in US IEPs grew by 8% in 2018, but the remainder of sending regions sent fewer students. Asia sent -8% fewer students, Europe -9%, the Middle East and North Africa (MENA) -18%, and sub-Saharan Africa -21%.

Two-thirds (66%) of students enrolled in US IEPs come from just five countries: China, Japan, Saudi Arabia, Brazil, and South Korea. The share of Saudi Arabian students studying in US IEPs has fallen from 30% five years ago to 12% in 2018 as a result of deep cuts beginning in 2015 to the King Abdullah Scholarship programme, which once funded thousands of Saudi Arabian students in the US. China’s share has moved from 14% to 23%, and Japan has also increased its contribution of students. Japanese students now make up 16% of the total compared with 9% five years ago. 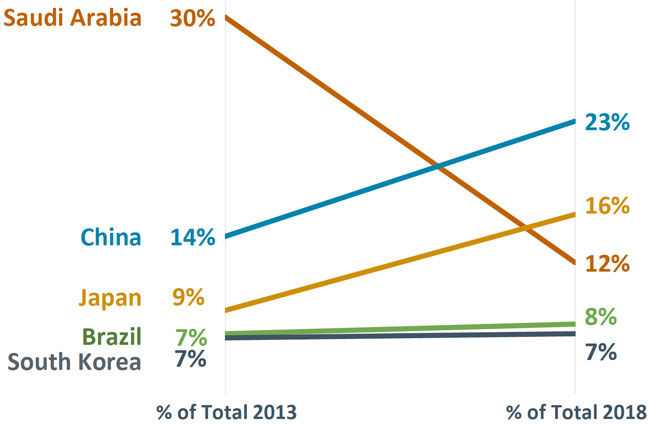 The top five sending markets for US IEPs, as a percentage of total enrolment, 2013–2018. Source: IIE

Expanding that list slightly, the top ten sending markets for US IEPS are:

Reflecting the regional patterns we noted earlier, only the three top ten senders in Latin America demonstrated any enrolment growth last year. All other top ten sending markets declined in 2018.

Enrolment growth (in green) or decline (in yellow) for the top ten sending markets for US IEPs in 2018. Source: IIE