The 2019 Independent Schools Council (ISC) Census reveals that the total number of international students in British Independent K-12 schools grew by just under 3% this year. The 1,364 ISC member schools report a total foreign enrolment of 55,280 as of January 2019. Just over half (52%, or 28,910 students) were enrolled while their parents were still overseas. The remaining 26,370 were enrolled with their parents also in the UK.

China (including Hong Kong) remains by far the leading sending market for the former group – those with parents overseas – and accounted for 43% of all enrolments this year. The European Economic Area (EEA) accounts for a similar percentage (45%) of the 26,370 students with parents in the UK – a proportion which actually grew 3% year-over-year. 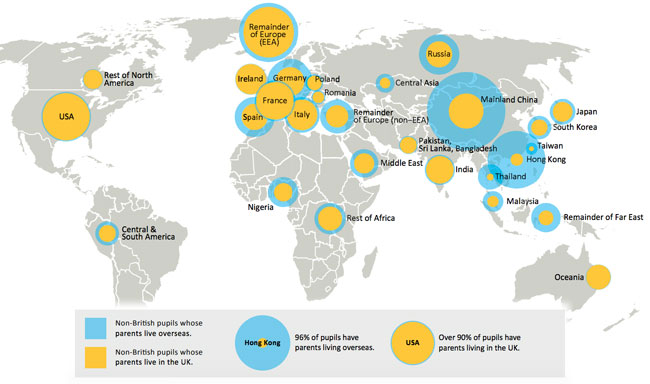 Commenting on the growth from within the EEA, ISC chairman, Barnaby Lenon said, “It is perhaps surprising to see an increase in the number of EEA pupils at ISC schools given the uncertainty surrounding Brexit, but clearly much value is placed on the broad all-round education independent schools offer, their inclusive environments, and commitment to supporting the development of globally conscious young people.”

The following chart highlights recent-year growth trends for key sending markets for British independent schools. While the overall numbers of Chinese students have grown steadily, the chart highlights contrasting trends between students from Mainland China and those from Hong Kong. Similarly, growth in overall European numbers has been blunted somewhat by declining enrolments from two leading senders: Germany and Russia.

The report notes as well that 690 ISC member schools are Tier 4 sponsors as designated by UK Visas and Immigration, thereby enabling them to admit students from non-EEA countries.

ISC adds that, “Non-British pupils whose parents live overseas are more numerous at ISC schools in the sixth form than as junior pupils: 54% of such pupils are in years 12 and 13, 44% in years 7 to 11, with only 2% in years 6 and below. Not surprisingly, these pupils are much more likely to board: 92% of non-British pupils whose parents live overseas choose to board.”

ISC reports a total of 58 overseas campuses this year with a combined enrolment of nearly 40,000 students. This compares to 47 campuses and 32,000 students only a year ago.

As the following table highlights, most of these offshore schools are based in Mainland China or the Middle East, with the remainder largely found in East and Southeast Asia.

This entry was posted in Europe, K-12, Regions, United Kingdom.