In 2011, the Swedish government decided to introduce higher education tuition fees for non-European Union/non-European Economic Area students. The number of foreign students in Sweden promptly declined and continued to do so until about 2014, when we first observed a modest recovery.

A new report from the Stockholm Academic Forum (STAF) – a peak body made up of local government plus the city’s 18 higher education institutions – provides further evidence of continuing growth since 2014, with foreign student numbers in Stockholm now approaching 2011 levels for the first time since the new tuition policy was introduced.

Study Destination Stockholm: Report on International Student Mobility, Stockholm 2017-2018 reports just under 10,000 international students in Stockholm as of the 2017/18 academic year. Those numbers have grown by 5% year-over-year, about 20% in total over the last three years, and are on pace to surpass the previous high point from 2011 some time this year.

Roughly one in four international students in Sweden is studying in Stockholm and so the report also provides an interesting directional indicator as to overall student numbers in the country.

As the following chart reflects, roughly two-thirds of those students are so-called “free movers” (that is, students in Sweden outside of a formal exchange programme), with the remaining third in the country on exchange. 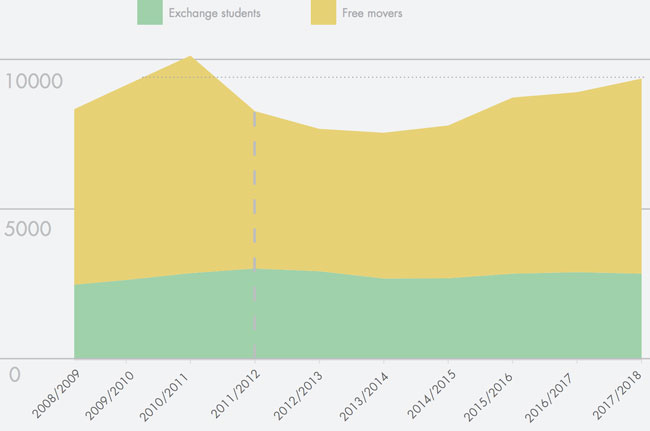 The other notable development for Stockholm, as of 2017/18, is that China is now the city’s largest sending market, having surpassed Finland and other traditional leading source markets in Europe.

“During the academic year 2017–18, the number of Chinese students skyrocketed,” notes the report. “They are now the largest single international student population in Stockholm with 826 students, an increase of 18% compared to the previous year.”

Along with China, only India (the fifth-ranked source market in 2017/18 with 385 students in Stockholm) and the US (ninth-ranked; 275 students) appear as non-European markets among the top ten sending countries for Stockholm.

Overall, roughly six in ten inbound students (61%) come from Europe, with another 27% from Asia, 5% from North America, 3% from Africa, an 2% from South America.

The STAF report notes as well that national breakdowns vary notably among institutions in Stockholm. Chinese and Indian students, for example, are more likely to be found in STEM programmes (science, technology, engineering, and math) at KTH (the Royal Institute of Technology). Meanwhile, the majority of students from other leading senders, including Finland and Germany, are enrolled at Stockholm University.

In commenting on the growing enrolment over the last three years, the report says, “Underlying this increase is strategic work including cooperation with prestigious universities worldwide, and marketing.”

This entry was posted in Europe, Regions, Sweden.