The sixth annual iteration of a massive global study conducted among prospective international students shows once again that students are thinking about their careers when choosing courses to study. The 2018 QS Enrolment Solutions International Student Survey also reveals that institutions that recognise and respond to a variety of student concerns may gain an important competitive advantage in the marketplace.

QS Enrolment Solutions conducted the 2018 edition of its International Student Survey in 193 countries among more than 67,000 prospective international students, which makes this the most extensive response yet for the survey. The survey had been conducted under the Hobsons banner in previous years, but is now administered under the QS brand following the company’s 2017 acquisition of Hobsons’ international division.

Students look for courses that lead to desired careers

More than two-thirds (68%) of prospective students said that they consider the availability of their intended programme of study to be the most important factor influencing their study abroad decisions, compared with 24% who said they consider a destination to be the leading factor.

Only 9% said that they were primarily motivated by an intent to study at a certain university. This is a highly important finding as it shows that students are influenced by many more factors than an institution’s brand when choosing a university. In particular, prospective students are more interested in whether a university has a student satisfaction score (39%) than in whether or not it has a prestigious brand (24%). Still more important to their decision-making is evidence that a given university has a high graduate employment rate (61%).

Nearly half (47%) of the survey sample was already on a career path and overall, career outcomes were the most important determinant of which course students chose to study. 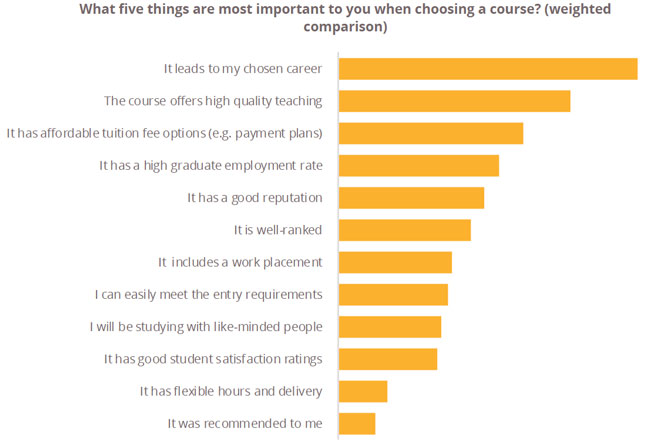 Most must carefully consider costs

When students were asked about their biggest concerns about study abroad, they mentioned the following five concerns (in order of importance): cost of living, availability of scholarships, safety, finding accommodation, and getting a job. Importantly, the survey authors noted that “despite the widespread misconception that international students are wealthy, 56% of respondents said their annual household income is less than $25,000 US Dollars.”

Fully one in three prospective students said that they were looking for a university scholarship to be their main source of funding and said that if they didn’t receive one they could not study overseas. And as the study notes, even students who aren’t reliant upon a scholarship are still concerned about the costs of studying:

Taking measures to ease students’ concerns can be a competitive advantage

We have often commented on the crucial role that student ambassadors and alumni can play in boosting recruitment efforts, as well as the priority students place on other students’ reviews of an institution. The QS International Student Survey results reaffirm these ideas. As you can see from the chart below, over four in ten prospective students said that having friends or family in a destination country would help ease their fears around study abroad. Being able to ask current students about an institution was also important in this regard.

In addition, more than a third (37%) of students said that discovering that there are good supports in place for international students would make them less worried about study abroad. Institutions that establish and promote such supports and provide welcoming environments can differentiate themselves to international students.

The wisdom of having current students vouch for the quality of an institution is further underlined by the fact that more than half of the QSES survey sample had not chosen the university they planned to attend at the time of the survey. Fully 61% of them were considering either a few options or lots of options. Hearing good things about a university from peers can potentially influence students to choose one university over another given the priority students place on peer reviews.

“At an institutional level, international students are looking for evidence that a university has up-to-date technology, which shows that the university is modern, investing in teaching and learning, and ready to prepare them for the modern workforce.”

The role of agents in student decision-making

Keeping in mind the survey’s focus on university-bound students, just over four in ten respondents (43%) said that they were not planning to use an education agent. Another 35% were planning to work with an agent, or had already engaged an agency, and the remaining 22% were undecided.

The survey revealed that 62% of prospective international students consider agents to be “a trusted source of information about study abroad,” and 60% said that “agents are useful in helping me study overseas but they don’t influence my decisions.”

The study authors’ assessment of these findings are that,

“Over the last three years the International Student Survey has consistently reported that agents are the least influential on student decision-making, a finding that we have taken with a grain of salt because many students were surveyed relatively early in their decision-making process, before many of them had engaged with an agent …. Agent engagement remains an important part of the recruitment pipeline for universities.”