Roughly five million students are studying outside their home countries today, more than double the 2.1 million who did so in 2000 and more than triple the number of mobile students in 1990.

This astounding growth has occurred in the context of an increasingly globalised world in which economies are closely tied to others within their region and beyond. In 2017, money and trade are flowing freely across many borders and from many sources, as are knowledge and skills as well.

As that total population of mobile students has increased, so too has the profile of international education in academic, commercial, and government spheres. For many leading or aspiring destination countries, education is not only a major export, but also an important pillar in trade policy, cross-cultural links, and diplomacy.

We might expect then that the global distribution of mobile students among study destinations has also changed over time, and indeed that is the case. How this is determined can be a matter of some debate, and some assumptions need to be made along the way – for example, as to the total population of students now abroad or in terms of how short-term language learning enrolments relate to student numbers in higher education.

We have factored such assumptions into the following estimates for market share for leading study destinations. The 2001 values reflected here are drawn directly from the Institute of International Education’s Project Atlas, whereas we calculated the 2016 market share based on the latest reporting from each destination country. In many cases, we adjusted those 2016 values to reflect areas of programming we thought might be underreported (or not included at all), language studies being a good example of variable reporting from destination to destination. 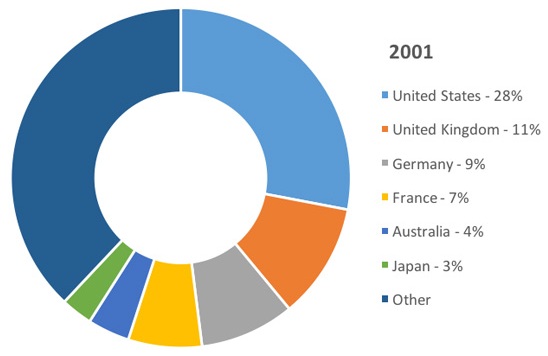 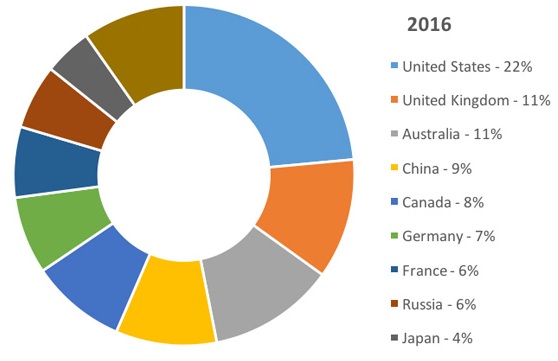 As the two charts reflect, the US has lost share over the last 15 years. However, keep in mind that global student numbers have more than doubled over the same period, and so even with a lower proportion of that total the US remains far and away the world’s leading study destination. As a group, American colleges and schools have seen dramatic growth in foreign enrolment over the past decade and host more than one million students today.

The UK holds steady overall in terms of global market share, but the story there is more complex. It too had seen significant growth in foreign enrolment from 2001, but that growth began to level out around 2012 and has been essentially flat in the years since. The UK remains one of the leading choices for international students today but it is fair to say that it is more vulnerable to international competitors than it has been in the past.

Against that backdrop, the British government has set a goal to recruit an additional 55,000 international students by 2020. It is fair to say though that under the government’s current policy direction vis-a-vis immigration, and with the challenges of the Brexit process now unfolding, this target may be difficult to reach.

In terms of gaining market share, the big movers in the charts above are countries like Australia, Canada, China, and Russia. Each has notably increased its proportion of mobile students since 2001, and each destination has done so on the strength of substantial growth in its international student numbers.

Australia’s current national strategy for international education sets an enrolment target of 720,000 international students by 2025. Standing on record enrolment of more than 550,000 students in 2016, and with average annual growth of 6.5% over the past decade, the country is well-poised to hit that ambitious target.

Canada, meanwhile, is aiming for 450,000 students by 2022 and it too appears on pace to hit that goal. With 353,570 students in 2015, and nearly two million weeks of ELT programming to factor in as well, Canada is set to extend its current growth trend into the foreseeable future. Particularly through 2017 and 2018, the country’s growing attractiveness as a study destination may well deliver above-average year-over-year growth rates.

China was not even on the chart, literally, in 2001, but has blazed an amazing trail in building its international enrolment within the past decade. The country hosted more than 440,000 foreign students in 2016, booking yet another year of double-digit growth over the year before, and putting it well on track to reach its target enrolment of 500,000 students by 2020.

Germany has largely held its market share over the past 15 years, in large part because of its own steady growth in international student numbers in German higher education. Germany will almost certainly reach its target of 350,000 foreign students by 2020 as the latest data from the German Academic Exchange Service reveals that there were more than 340,000 enrolled in German institutions in 2016.

In contrast, France’s market share has slipped in recent years. While it hosts more than 310,000 foreign students today, its numbers are growing more slowly than is the case in other major destinations. Additional steps will be needed, both in terms of national policy and with respect to the combined recruitment effort of French institutions, if France is to reach its target of 470,000 students by 2025.

Rounding out the list of leading destinations in our sample, both Russia and Japan have also registered important gains within the last several years. From a base of just over 100,000 foreign students in 2004/05, total enrolment in Russian higher education reached 282,900 in 2014/15 for overall growth of nearly 200% during the decade. And in Japan, two consecutive years of double-digit growth have left the country in a better position to reach its own ambitious target to host 300,000 foreign students by 2020.

Overall, the outlook is for continued growth in international student mobility through 2030, but for a more complex marketplace as well – one marked by increased competition and, as we see in our charts above, by a widening distribution of international students across study destinations.

We are already seeing a clear pattern toward a greater proportion of mobile students staying within their home regions. Similarly, the modes of education exports have expanded in recent years, particularly via transnational education where we continue to see increased provision of academic programming overseas via branch campuses, partnerships for local delivery, and/or online delivery. These will be among the major factors acting on enrolment growth and market share for individual destinations in the next decade.