An annual data release from Malta’s National Statistics Office (NSO) shows that student arrivals for English Language Teaching (ELT) programmes increased slightly in 2016. Malta welcomed 76,730 ELT students during the year for a 1.6% increase over the head count for 2015.

At the same time, total student-weeks declined for the second consecutive year. The NSO reports a total of 229,005 ELT weeks for 2016, with an average stay of three weeks (which was down slightly from the 2015 average). This compares to a recent-year high of 245,587 weeks in 2014, and reflects a 4% decline in student-weeks from 2015.

That slightly lower average stay for 2016 likely reflects an underlying shift in the composition of Malta’s ELT enrolment. The junior market (that is, students younger than 18-years-old) is a major factor in the country’s ELT enrolment with juniors accounting for 48% of all arrivals in 2015. That proportion increased to 50% in 2016 driven in part by a 13% increase in bookings for students aged 15 years and younger.

Reflecting again the significant share of bookings for junior students, summer is unquestionably the peak season for Maltese ELT with half of all arrivals occurring in June, July, and August, and 25% of all arrivals in July alone.

As in previous years, the majority of Malta’s ELT students come from other European countries. The top three sending markets – Italy, Germany, and France – accounted for nearly half of all ELT arrivals in 2016 (and a third of all student-weeks). Twelve of the top fifteen source markets are in Europe (the exceptions being Brazil, Japan, and Colombia which ranked as the 9th, 10th, and 15th biggest senders respectively).

On a bright note, student numbers for four of the five leading source markets were up in 2016, with Russia, and its 27% year-over-year decline in student arrivals, as the sole exception among top senders. Meanwhile, Libya, which had been a key source for Maltese ELT providers in previous years, fell off the list of the top 20 source markets in 2016.

The declines in those two key markets represent a sea change in Maltese ELT, one that language schools have been working to offset by building enrolments from non-EU markets. Indeed, in 2016 the overall drop in student arrivals from Russia (1,564 fewer students in 2016) was balanced by gains in a number of countries outside the European Union. Growth from Brazil, Japan, Turkey, and Colombia in particular resulted in a combined 1,606 additional arrivals in 2016.

Genevieve Abela, CEO of the Maltese ELT association FELTOM, summed up the situation in a recent interview with Study Travel Magazine: “The market in 2016 has proven to be a very volatile one, especially given the geo-political situation in the Mediterranean as well as the political situation vis-a-vis Russia. The markets which have been affected negatively were Libya and Russia, where we have seen a sharp decline of arrivals.”

“On the other hand,” she added, “thanks to the long-term strategies adopted by our member schools investing to diversify their markets, Malta has managed to attract many students from new markets such as Colombia, the Czech Republic, Brazil, and Turkey…we are looking forward to the coming few months with anticipation.”

More broadly, the recent-year trends in Malta reflect a global pattern of slowing growth in ELT enrolment. Industry analysts at StudentMarketing estimate that annual growth in the sector is now in the range of 2.6% per year, and note that 12 of the world’s top 20 sending markets showed declines in student-week volumes between 2013 and 2015. 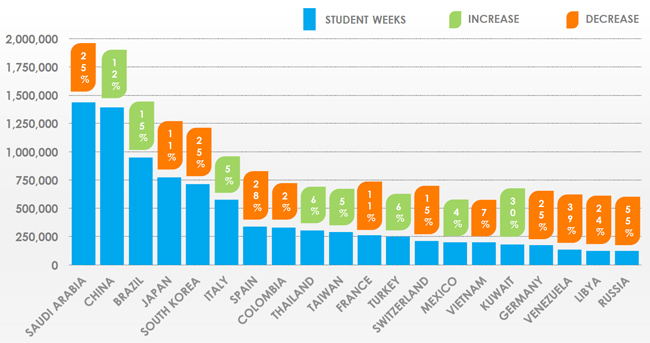 The clear implication of this is that individual destinations and providers are competing more intensively with each other for market share, and, in many cases, placing a greater emphasis on a diversification of source markets. Malta, as the seventh-ranked ELT destination globally and with its traditional focus on serving students from EU markets, has increased its efforts to build enrolment outside of Europe. As the 2016 results indicate, this diversification strategy has played a key role in sustaining and even slightly building ELT numbers in Malta during 2016.

This entry was posted in Europe, Language Learning, Malta, Regions.