Leading with the destination: A case study in location-based marketing

Spain’s Mediterranean city of Málaga has emerged as an important destination for international students in the country. In fact, some of its educational institutions have made the lure of Málaga an integral part of their marketing strategies. ICEF Monitor spoke with locals from this dynamic city on the Costa del Sol about selling both their location and their services.

Málaga is one of the oldest cities in the world. It began as a bustling Phoenician trading port 2,800 years ago, and was subsequently conquered and occupied by Carthaginians, Romans, Visigoths, Byzantines, Moors, and Castilians. Each group left their mark on the city, and today Roman ruins, Arabic fortifications, and baroque churches all remain as evidence of previous cultures.

That multicultural influence is ongoing. In 2015, the city inaugurated the Centre Pompidou Málaga, a branch of the famed Parisian art museum, and the State Russian Museum, an offshoot of the 120-year-old St. Petersburg institution. These museums join the Museo Picasso Málaga, which opened its doors in 2003 in honor of Málaga’s most famous native son.

Recent years have also seen the ancient city make its core more pedestrian-friendly, restore historic buildings, and reconfigure its waterfront, which last year docked 228 cruise ships carrying 413,662 passengers (in 2015, they anticipate this number will rise to 478,433). Approximately 4 million people visit the city each year (a 5% increase is predicted for 2015), and the province welcomes more than 10 million tourists annually. Málaga is the fourth-ranking city in Spain for economic activity, behind only Madrid, Barcelona, and Valencia.

Another draw for Málaga at the moment is price. The euro’s tumble has made Spain less expensive for foreigners. For Russians, that advantage dissipated when the rouble also fell over 2014, but for most other nationalities the cost of living in Spain as measured in their local currencies has rarely been lower.

For local educators, the timing for location-first marketing has never been better. Málaga experienced growth from nearly all its traditional tourism markets in 2014. Particularly strong markets include Belgium, China, Denmark, Finland, France, Germany, Ireland, Italy, Japan, Poland, Switzerland, the Netherlands, the UK, and the US. Further statistics can be found on the city’s website.

The history and culture of Málaga give local educational providers a handy tool for drawing international students. Sara Quintero Quesada, who as Executive Promoter of Language Tourism for the City of Málaga works to promote the student travel sector, told ICEF Monitor, “We just try to show everything we have here – our weather, gastronomy, nature, sports. It’s also a cultural city with monuments and more than 30 museums. Málaga can present itself as a city full of life at any time of the day with numerous activities and events throughout the year such as Holy Week, the Spanish Film Festival, the Fair of Málaga, etc.”

All of these aspects of Málaga are important, but they are also already well known, and they are among the reasons tourism to the city is on the aforementioned upswing. The key to successful marketing efforts is to not only spotlight what makes a particular destination unique, but to engage the target audience through the use of effective promotional methods.

Ms Quintero focuses much of her efforts online, where she seeks to increase interactions with both prospective and current students. On the city’s website, users are presented with numerous drop-down menus containing events, educational audio guides, 360º photos, and virtual walking tours. Additionally, she is working on a new website specifically for students.

Of special note on the malagaturismo.com site is an interface that allows users to send e-postcards to relatives and friends. Like physical postcards, these versions leave space to write personalised messages, thus facilitating contact between students and their friends and families while spreading knowledge of the city’s attractions to people who may have never visited.

Social media is a powerful force for the city, with accounts on Google+, Twitter, and YouTube, as well as two Facebook pages: Málaga Ciudad Genial (Málaga Great City) and Live Spanish in Málaga. Successful Facebook pages not only use striking imagery and encourage user comments; they regularly feature a mix of engaging new content. For example, on the Live Spanish page, Ms Quintero shares common Spanish sayings with users and explains their meanings, and uploads photos from official trips to places such as Taiwan. This type of approach helps pages stand apart from the crowd.

Engaging content also keeps Facebook pages within the rules, since the posting of overly promotional material is forbidden. This include posts that solely push people to buy a product, enter contests, or reuse the same content from ads. In the end Facebook is a social space and the most successful pages use it that way.

As of February 2014, Spaniards spend about 1.5 hours per day using social media, and the country has more than 19.6 million Facebook users. With 1.44 billion monthly active users as of March 2015, Facebook’s continued global popularity makes it a mandatory platform for institutions wishing to promote their services.

The University of Málaga

The first tool they use is the city itself, especially in terms of markets like Russia and the Middle East, where travel to Spain is traditionally popular. Mr Pedrosa and Mr Garrote first use the appeal of the city and wider province, and then they promote the University of Málaga campus, which is the second largest in Spain in terms of physical area.

They also described a different type of location-related promotion to ICEF Monitor. They believe that Erasmus exchange students who have experienced Malagueño culture and have returned to their home countries are natural ambassadors for the University of Málaga. Their positive experiences in Spain, relayed through word-of-mouth, effectively serve as free advertising.

In this vein, one of UMA’s promotional strategies draws upon former instructors as natural “human capital.” UMA maintains close contact with a network of about 400 Spanish professors who teach overseas. The university tries to encourage these professors to send students to the university. As incentive, UMA offers training courses in academic development and courses for specialising in teaching Spanish. For prospective students, positive reviews from peers and encouragement from experienced teachers with cultural and professional connections to Spain can also be strong influences.

Much of UMA’s promotional focus is on Japan, South Korea, and especially China, where the university works with agents who specialise in their local markets. While South Korea seems a less likely choice because it is facing a decline in its youth demographic, it remains a primary market for UMA due to research links, which in turn ease access to the student population.

On the whole, about 4,000 of UMA’s 40,000 students are foreigners. Roughly 40% arrive via direct international agreements such as with Erasmus, 30% are referred by agencies, and 30% arrive independently.

Another company that uses location-based marketing is Cervantes, which was created in 1991 by the Spanish government to globally “promote Spanish language teaching, as well as that of Spain’s co-official languages, in addition to fostering knowledge of the cultures of Spanish-speaking countries throughout the world.”

Today Cervantes operates in 90 cities in 43 countries, offering diplomas of Spanish as a Foreign Language (DELE), organising Spanish exams, and participating in outreach programmes in collaboration with Spanish and Latin American organisations. It uses a broad promotional approach centred on arts and history by hosting book signings with Spanish-language authors, screening Spanish films and television shows, and staging history lectures. Its events are free and simultaneous translation services are provided.

Cervantes also maintains an expansive multimedia platform – Virtual Center Cervantes – containing reference portals about the Spanish language and culture. Among the wide-ranging offerings to be found there are a bank of idioms, activities for children, and a user forum where registrants share and discuss language questions. 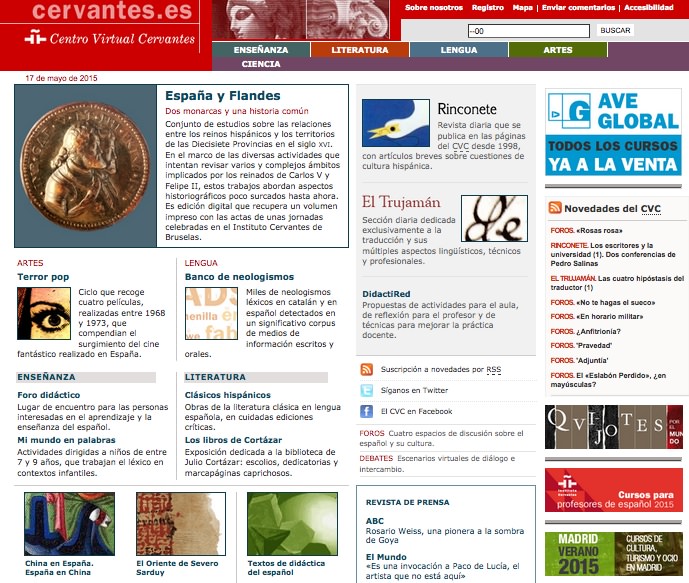 When users arrive on the page, the impression is of a cultural space rather than one related to language learning. Cervantes maintains the website as an arts and history portal for users, and by doing so increases its credibility by demonstrating its expertise on all aspects of Spanish culture. The arts connection is well timed – Málaga’s growing reputation in that field was discussed in a March 2015 item in the New York Times.

Andalucia is in the midst of a regional strategy to elevate the profile of its cuisine, with Málaga positioning itself as the region’s food hub. With the city having been declared in international newspapers and websites as experiencing a “food revolution,” Malaca Instituto’s language plus food formula aims to take advantage of this growing recognition.

In areas of food, art, history, and lifestyle, Málaga’s educational institutions have positioned themselves on the crest of a wave of popularity. While not all cities are at historical crossroads, or are internationally known for sun and sea, or have the varied present-day attractions of Málaga, the same strategies of location-first marketing can work for international educators anywhere.

Understanding which elements of each locale are capable of exciting students and presenting them knowledgeably is the key to building cultural credibility. Effective use of technology and social media can be the conduit for getting those ideas across. Furthermore, facilitating not only students’ overseas learning, but also their cultural explorations, can help boost enrolments and strengthen educators’ brands. Afterward, students are more likely to become ambassadors for the cities they visited and the schools they attended there.