By population of native speakers, German is the 10th most-widely spoken language in the world. But when measured in terms of economic impact – that is, by the gross national product (GNP) generated by German speakers – it ranks fourth worldwide, after only English, Chinese, and Spanish.

“The world knows that the [European Union] is economically dependent on Germany and that Austria and Switzerland, which are also German-speaking, are also flourishing economically,” says German socio-linguist Ulrich Ammon. “It’s impressive for people that Germany can compete with the large countries as a world export leader. That gives the impression that learning German will give you access to countries that flourish economically and offer good opportunities for business or for a career.”

Professor Ammon may have a point. New data released earlier this month highlights the fact that the number of people learning German as a foreign language has grown for the first time in 15 years. The Deutsch als Fremdsprache weltweit. Datenerhebung 2015 (German as a foreign language worldwide) survey is produced every five years as a collaborative initiative of the Zentralstelle für das Auslandsschulwesen (Central Agency for German Schools Abroad, also known as ZfA), the German Foreign Office, the Goethe-Institut, and the German Academic Exchange Service (DAAD).

The Deutsch als Fremdsprache weltweit began in 1985 and, with each five-year interval, it recorded a growth in German language study to a peak of 20.1 million learners in 2000. Subsequent editions of the survey recorded declines in the student population to 16.7 million in 2005 and 14.7 million in 2010, so the 2015 findings are a welcome reversal for German officials and educators.

The 2015 edition of the survey puts the number of German learners worldwide at more than 15.4 million. The vast majority of those – 61% or 9.4 million people – are in Europe, but the survey indicates significant growth in German language study in emerging markets over the past five years, notably in Brazil, China, and India. 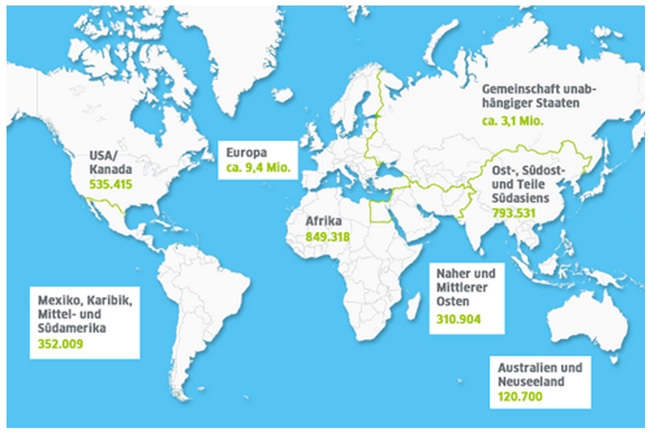 “China has seen the number of people learning German more than double in the past five years, to about 170,000,” reports Deutsche Welle. “Brazil has also seen a strong growth in German learners, with about 135,000 people currently studying it – about a third more than in 2010.”

The German broadcaster adds that growth since 2010 has been even more dramatic in India and that plans for further expansion are well advanced: “In 2010, only 18,550 schoolchildren were learning German. Four years later, that number rose to 107,000. The ambitious goal is to establish 1,000 new schools offering German as a foreign language throughout the country. Negotiations with India’s government are already underway.”

The German government has signalled its commitment to such an expansion as well: “It’s a way to create new partnerships,” says Germany’s Minister of State Maria Böhmer. “German language classes are an integral part of Germany’s foreign policy.”

If much of the growth in German language study since 2010 is coming from emerging markets, Europe is still the foundation for the global population of German language students. Poland, in turn, is the leading market for German studies in Europe, accounting for nearly 2.3 million students in the 2015 survey. This represents 24% of the European total and 15% of the global total. “Poland and Germany are economically, socially, and culturally closely interconnected,” the study report adds. “The wide range of exchange programmes, scholarships, study opportunities, and enhanced job opportunities in German companies in Poland or in Germany significantly promote the motivation to learn German.”

France, another key European market, is home to another million students learning German as a foreign language. France and Germany have for many years now encouraged the study of each other’s languages within their respective school systems. However, the French government has recently indicated an interest in moving away from its current emphasis on German language study, a prospect that has been vigorously challenged by German officials and educators.

Russia, meanwhile, has bucked the overall trend with a notable decline in its population of German language learners, from about 2.3 million in 2010 to 1.8 million in 2015. The survey report attributes the drop in student numbers in Russia to a number of factors, and particularly to ongoing structural changes in the Russian education system. “Especially in rural areas, the school structures are changing rapidly. More and more schools are closed or merged, so that the number of schools [teaching German as a foreign language] has decreased from about 22,600 in 2010 to just 16,800.” The report notes as well that urban schools in Russia continue to emphasise English language study to a greater extent and that this has negatively impacted German language class enrolment.

As the Russian example particularly reflects, the bulk of German language students worldwide are enrolled via their domestic school systems. This amounts to 13.4 million (or 87% of the global total) in the 2015 survey. As University World News reported recently, “Germany’s PASCH or Partnerschulinitiative des Auswärtigen Amtes (Schools: Partners for the Future) plays a key role in this context, with its roughly 1,700 partner schools and a total of 600,000 students, acting as a beacon to also attract students to other programmes.”

In line with its position as a major economic power, Germany is also an important international study destination. That, along with the German government’s commitment to promoting German language study worldwide, suggests that further growth in enrolment may be in the forecast for key emerging markets in particular.

A recent study from the International Association of Language Centres (IALC) provides a further indicator of growing demand in the future. The IALC study is based on a global survey of nearly 500 agents and nearly two-thirds of respondents (62%) indicated that they promoted German language programmes, making German the third-most marketed foreign language among responding agents after only English and French.

Nearly half of the responding agents (48%) indicated that they have observed increasing demand for German language studies, particularly for pathway programmes leading to advanced studies with German universities and also for junior programmes.

The IALC study also noted growing demand for German in emerging markets in Latin America but also in Asian markets such as India, Nepal, and Pakistan. “The further east you go, the more important German becomes,” agrees Professor Ammon. “In China or India, German is more important than, say, Spanish.”