Australia reversed a three-year enrolment decline in 2013, registering a modest increase of 2.6% in total international student numbers and a much more noticeable bounce (9.3%) in student commencements. We reported previously on early Australian Education International (AEI) data for 2014 that indicated that this growth was continuing in the first half of the year. And now the latest data, reaching up to year-to-date (YTD) November 2014 and so covering nearly the entire year, clearly establishes that the turnaround that began in 2013 has strengthened and extended through 2014.

As of YTD November 2014, there were 583,714 full-fee paying international students enrolled in Australia. This represents a 12.3% increase over the same period for 2013, and compares very well with the average annual enrolment growth rate of 5.4% per year over the previous ten years.

Following the pattern we noted earlier for 2013, commencements for YTD 2014 have grown at an even faster clip. “There were 347,591 commencements in YTD November 2014, representing a 17.4% increase over the same period in 2013,” says AEI. “This compares with the average YTD November growth rate for commencements of 6.1% per year over the preceding ten years.”

Other highlights from the new AEI date include:

YTD November 2014 enrolment and commencements compared to the same period for 2013. Source: AEI

ELICOS commencements good for everyone

While there are many important trend lines in the latest AEI data, the notable increases in both ELICOS enrolment and commencements certainly caught our attention. English Australia reports a particularly heavy spike in ESL enrolment over the 12-month period spanning the second half of 2013 and first half of 2014 with “more sustainable levels of growth” in the latter half of last year.

The table below offers additional details.

The impact of this growth in ELICOS enrolment beginning in the latter half of 2012 goes beyond the performance of ESL providers in Australia. The link between ELICOS studies and enrolment in other education sectors is well established. We noted the following highlights from a late-2014 Australian Department of Education report that mapped the study pathways of international students:

As the following chart illustrates, ELICOS commencements have now recorded two consecutive years of substantial growth – a trend that bodes well for continued strengthening of enrolment in other education sectors in 2015 and after. 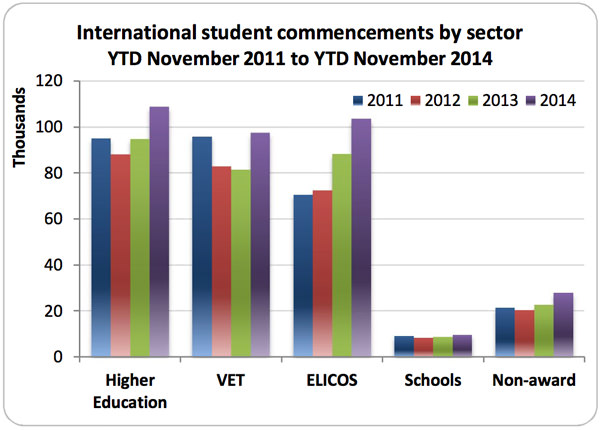 With its strong enrolment growth through 2013 and 2014, it is not surprising that Australia’s ELICOS sector has improved its international position over this period as well.

A separate analysis from English Australia points to the increased competitiveness of Australia’s ELICOS sector through 2013. The peak ELICOS body points out that Australia overtook Canada that year to occupy third place (after the US and UK) in terms of market share by student-weeks delivered. It appears that both Australia and Ireland gained market share over 2013, largely at the expense of the US. 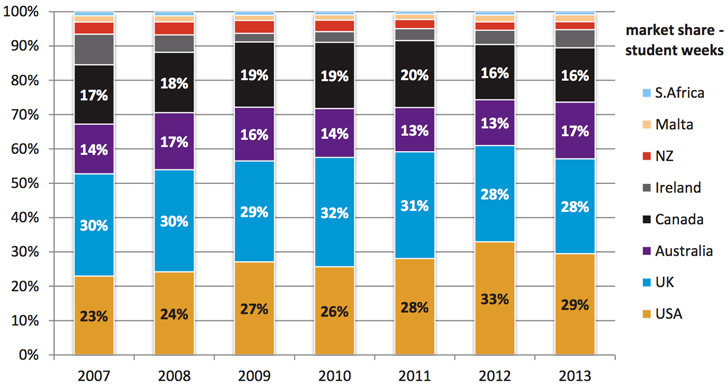 Thank you China, you too India

China and India are Australia’s two leading source countries, accounting for 26.2% and 10.7% of total enrolment respectively, and both registered notable gains in 2014. Chinese enrolments increased by 8.5% YTD November 2014 and Indian students numbers jumped up by 29.3%, a marked contrast to the declining trend for India reported in the UK in recent years.