Mystery shopping experiment on social media: Is there anybody out there?

The following is a guest post by COO Ben Waxman and Academic Advisor Lisa Cynamon Mayers of International Education Advantage (Intead). The authors greatly appreciate the research support and analysis by Vanessa Zhu.

What happens when a prospective international student uses Facebook and Twitter to indicate their interest in finding out more about your institution?

At Intead, we recently conducted a mystery shopper experiment with institutions in the US, Canada, Australia, and New Zealand to see how they responded to the Facebook and Twitter inquiry of a prospective international student created by us for the purposes of the study.

We were disappointed but not surprised by the dismal rate of response to students’ inquiries by too many of the institutions we monitored; this same trend marked previous mystery shopper experiments we have conducted.

But there were also examples of very smart, quick responses to our mystery shopping experiment. This article will profile the results of the experiment and reveal the institutions that did the best job at managing student inquiries via Facebook and Twitter.

Establishing a social media platform is not enough

In a short span of time it seems as if every institution under the sun has created a Facebook or Twitter account, and for good reason. Given the proliferation of social media and students’ affinity for it, having a vibrant presence on social media is critical.

But as we have often written about and spoken about at conferences, creating a social media account is not enough in itself. In fact, it is worse to have an unmonitored, ineffective, ignored account than it is to have no account at all.

We wanted to know how well institutions are leveraging their social media presences to respond quickly and courteously to students reaching out via Facebook and Twittter. To find out, our intern, Vanessa Zhu, conjured up the identity of prospective international student “Aahana Bahl”, aged 22, from India. “Ms Bahl” sent Facebook messages and tweets from October 24 through November 15, 2014, to 80 randomly selected institutions – 50 in the US, 15 in Canada, 10 in Australia, and 5 in New Zealand – indicating her interest in the institution and her desire to receive more information. The Facebook message and the tweet were simple and straightforward:

All institutions were sent a Facebook message and a tweet. The date and time the message was sent was recorded and then the response was closely monitored.

Some institutions simply did not respond 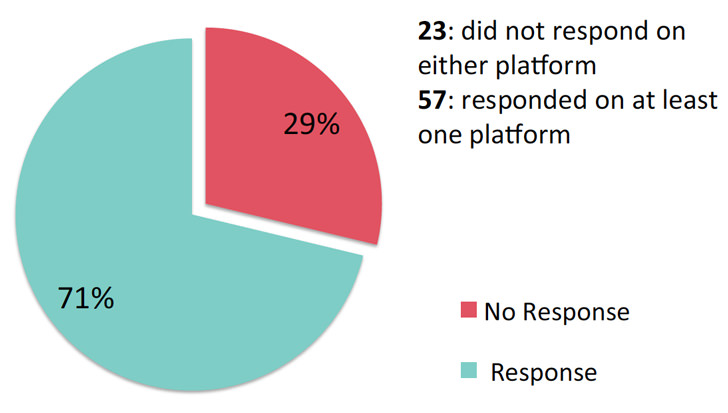 No response. No opportunity to engage. The funnel is choked off early in the process.

So much is at stake

As has been widely researched and reported, the way that students communicate has changed significantly. This mobile generation wants information via their preferred method on their terms. Students do not even want to take the time to read or send emails anymore; texting and social media are the preferred methods of communication. Messages on these platforms are short, sweet, and to the point – exactly the way students communicate with their peers. This is especially true for international students, as communication barriers are lowered significantly with text and social media messaging. Higher education marketing has been slow in responding to students’ desires and preferences.

Institutions need to move beyond merely creating social media accounts and use them to their greatest advantage, including:

This is important, especially since many institutions are not managing this type of marketing platform effectively, so doing it well stands to be a competitive advantage.

Students want to see a quick response to their inquiries. Australians were the big winners in this category. The average response time for replying to “Ms Bahl’s” messages on Facebook and Twitter for institutions in Australia and New Zealand was 2.04 hours. For Canadian institutions, 4.58 hours. And for US institutions, 22.15 hours. Speed is important, as is the quality of the response. 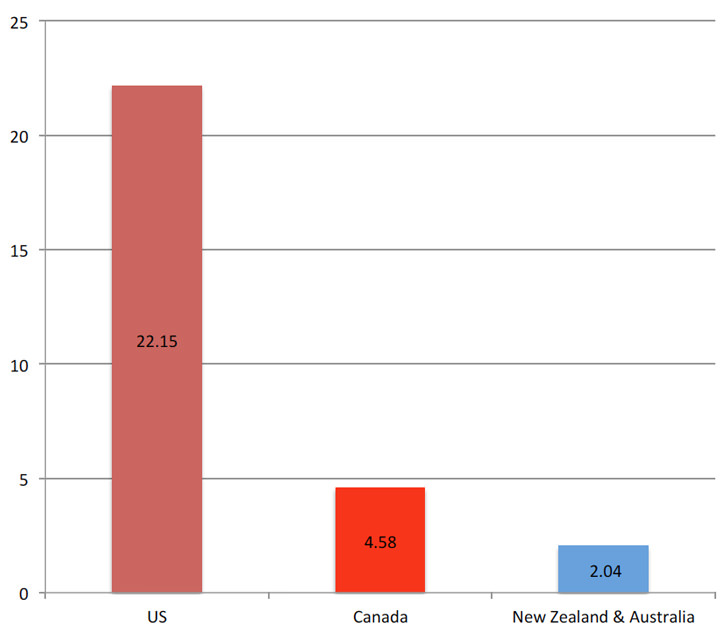 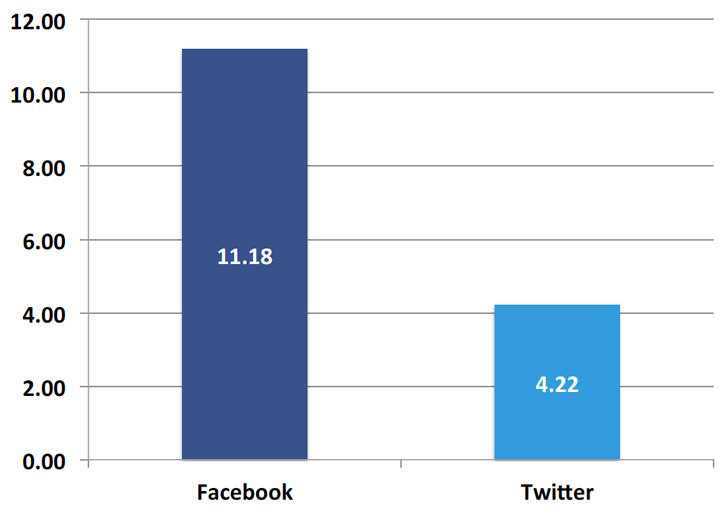 Some institutions sent out amazing responses

The kinds of responses “Ms Bahl” received varied greatly. There were three things we looked for in the response to our social media messages:

There were several institutions that impressed us with the kinds of responses they sent “Ms Bahl.” On Facebook, Massey University (New Zealand) sent a link to their international student site with a compelling image. On Twitter they included a link to the international student site, a smiley face (the smiley face goes a long way!), and within five minutes asked “Ms Bahl” her area of interest and followed her on Twitter. 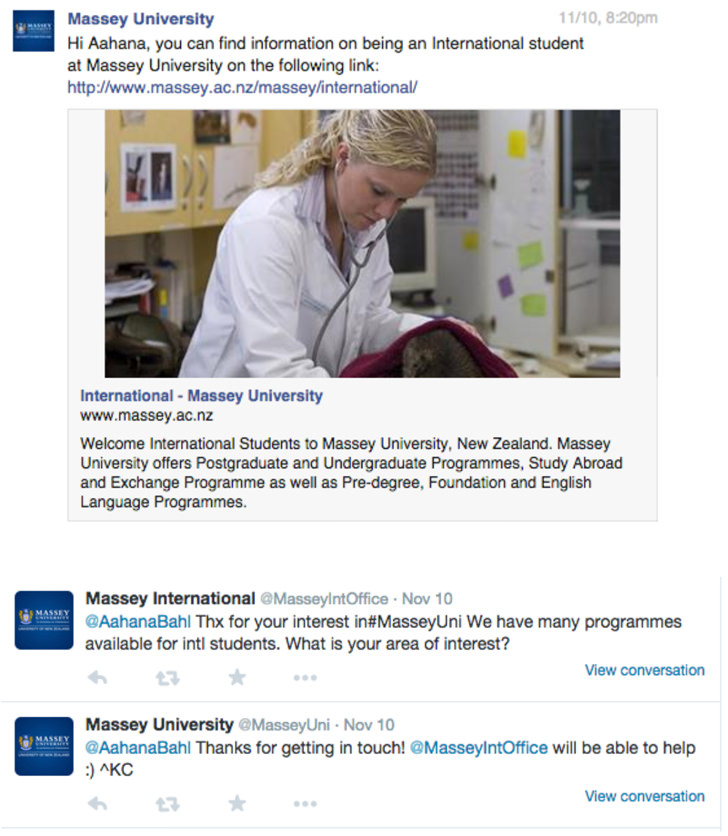 The University of Melbourne (Australia) sent a lengthy response to our Facebook inquiry including separate links to the course search catalog, the international student site, and the study abroad/exchange student site. Its Twitter response to our inquiry was personal and friendly, and reflected social media coordination across platforms: “I’ve just commented on your Facebook post with information for future international students. Thanks, Jessica.” All of that in less than an hour after our inquiry was sent! 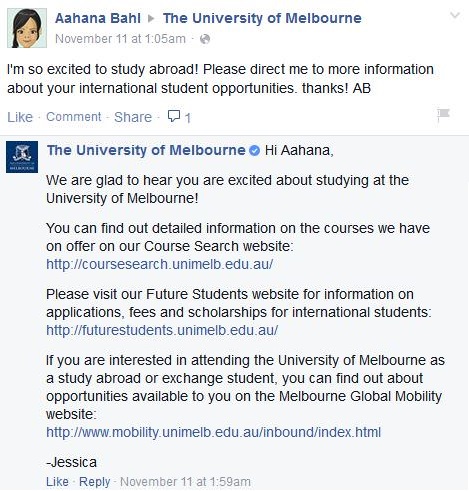 The University of Winnipeg (Canada) included links for international student admission requirements, programmes offered, tuition fees, housing, and the website for the admissions office. In addition, a comprehensive site with specific information for Chinese, Korean, Japanese, Brazilian, Indian, and other nationalities was included in the Facebook response. The Twitter response reflected a personal, friendly nature: “Hi, I’ve replied to your message on FB. We look forward to hearing from you. :)” Let’s be honest, the smiley face actually does add a lot to the message! 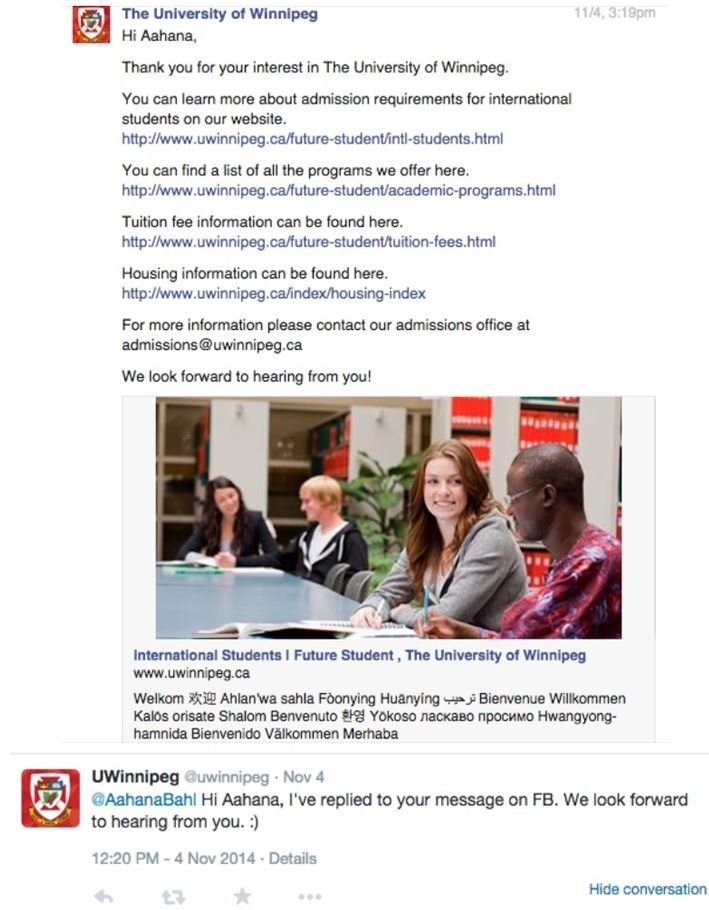 Case Western Reserve University (Cleveland, OH, US) was one of the fastest, friendliest responders in the US, and they showed coordination in their Facebook and Twitter responses. On Facebook they asked “Aahana” if she saw their Twitter post. The responses included links to the international student site. All of that in less than two hours! 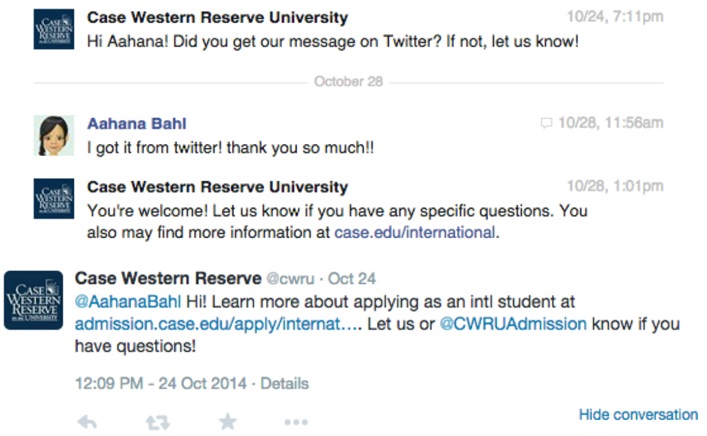 Some institutions sent responses but told “Ms Bahl” she should visit their website but failed to include the link. These institutions receive partial credit for their effort. Yes, they replied to the inquiry but they failed to provide an easy way for the student to access additional information.

It’s about customer service, and that goes a long way

It’s important to take the time to put in the extra effort to provide the least number of barriers for prospective students to learn about your institution.

Now that you’ve read this, are you thinking about your own social media response rates? Do you have a system for replying efficiently and personally to student inquiries made via social media? Maybe you’re even wondering if you were a part of our experiment.

Out of courtesy to our colleagues around the world we won’t publicly reveal the institutions surveyed in our experiment, apart from the winners we mentioned above. However, if you’re curious about whether you were included, please contact us. We’ll be happy to let you know. And remember the three key features of a successful social media contact: timely, personal, relevant. Then behind the scenes, monitor everything!