The research on mobile device use, and associated Internet user behaviours, continues to accumulate this year. The insights in some of the latest reports build on observations and statistics we’ve offered recently, and will continue to shape marketing practices for mobile in 2014.

Two new studies in particular are on our radar this week. The first, based on face-to-face interviews conducted in 24 countries by the Pew Research Center’s Global Attitudes Project, finds that Internet, mobile, and social media use is booming worldwide. Even more interesting, the study shows that users who adopt mobile and social media technologies are often avid, rather than occasional, users of them.

These numbers skew higher than the statistics we have seen in other recent research, but even so, the implications for education marketers are clear:

Related research shows us that online search, often unrelated to a specific educational brand or institution, plays a huge role in students’ efforts to explore and choose options for further study. However, much of that search activity does not convert to a higher level of engagement via an enquiry, application, or other key “opt-in” behaviours.

Consumer behaviour in the travel industry can be analogous to prospect behaviour in international education, and attendees at the recent Travolution Summit 2013 learned that users might visit as many as 22 websites before purchasing a travel product. Further, 50% of users will continue to search even after they find a travel product that fits their preferences, budgets, or other interests. As reflected in the Zinch/Uversity study above, peer influence is another important factor in travel consumer behaviour, both with respect to validating the customer’s purchase, or helping to turn a “maybe” into a “yes.”

This is well reflected in the prevalence of review-based websites in the travel industry but also in the increasing importance of alumni and student testimonials in education marketing.

Mobile and social media use taking shape around the world

The Pew Research study we noted above shows that Internet use is still building in many markets around the world. It also observes, however, that “once people do gain access to the Internet, they quickly begin to integrate it into their lives. A significant number of people in these nations say they use the Internet on a daily basis, including roughly half of those polled in Lebanon, Russia and Argentina. At least 20% use the Internet daily in 15 of the 24 nations surveyed.”

In 21 of the 24 nations included in the Pew study, a majority of Internet users are also social media users, including major platforms like Facebook and Twitter as well as other regional networks.

Of particular interest to education marketers, the Pew study finds that Internet use – and the use of web-based communications – is much more common and persistent among those under 30 years of age: “In 14 of 24 nations, at least half of 18-29 year-olds say they are online… People who do go online tend to become avid users. Half or more of Internet users in most of the countries surveyed say they use it daily.”

The study reports as well that Internet use is closely correlated with national income:

“Generally, the higher a country’s GDP per capita, the higher its percentage of Internet users. The three nations with the highest per capita incomes in this survey – Chile, Argentina and Russia – also have the highest Internet usage rates. Meanwhile, these rates are especially low in two of the poorest countries surveyed, Pakistan and Uganda, where roughly nine-in-ten never go online. Some nations, such as Kenya, Jordan, Egypt and Bolivia have more people online than might be anticipated, given their per capita income.” 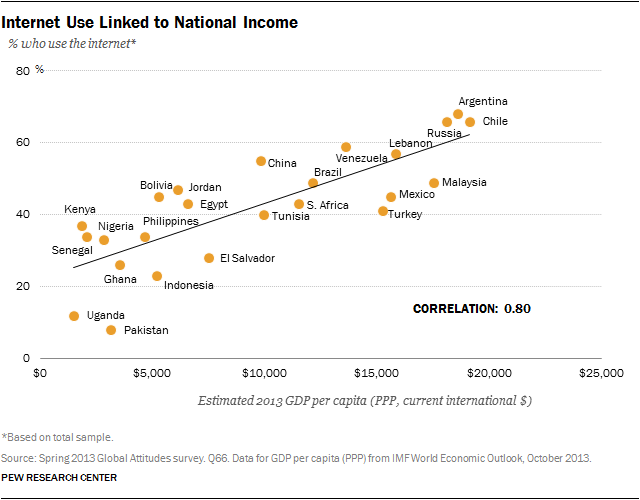 Social signals and the admissions process

Nearly two-thirds of the US prospects in the Zinch study reported using social media to research colleges, and almost 70% felt that social media was either “extremely” or “moderately” influential in their choice of institution.

However, the study does raise questions about the “signal-to-noise” ratio on educators’ social media channels with only four in ten prospects reporting that they had found relevant information on the institution’s social media site.

One important observation here is that students may look more to other channels, particularly an institution or school’s website or mobile app, for key programme or service information. But that they look to social media channels for review commentary – for insights from students, alumni, or other prospects – and especially for opportunities to engage directly with staff and students.

Two-thirds of prospects reported that social media conversations are an important influence in their decision-making process. The opportunity to connect via social media with currently enrolled students, other admitted students, and admissions counsellors were all rated as “very important” by roughly a third of US prospects in the Zinch survey. 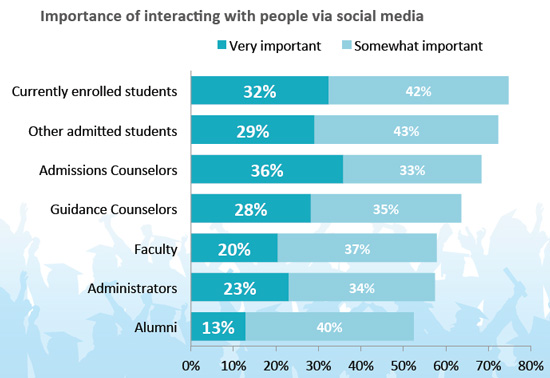 Research like this begins to sharpen our understanding of how different online channels work together, and how search relates to institutional or school sites and to social media networks as well. If search is the top end of the enquiry and admissions funnel, then the institutional site (or app) is a key channel for presenting relevant information and engaging prospects, and social media is another critical channel for driving engagement and conversion. And this broad spectrum of search, information discovery, and engagement behaviours are ever more taking place on mobile devices in the hands of student prospects around the world.