Canada’s international student enrolment up 94% over past decade

These are some of the key findings in the second edition of the A World of Learning report from the Canadian Bureau for International Education (CBIE). The report was released this week in conjunction with CBIE’s 47th annual conference in Vancouver. 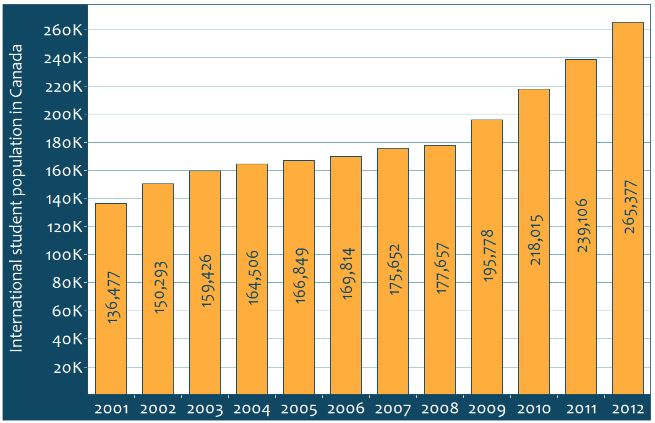 International students in Canada by year, 2001 to 2012, all levels of study. Source: CBIE

The study estimates that Canada holds a 5% share of the global market for internationally mobile students, making the country the 7th most popular study destination worldwide after other leading hosts such as the US, the UK, China, France, and Germany.

At this level of global market share, CBIE reports that international students in Canada had an economic impact of nearly CDN $8 billion in 2010 and accounted for more than 81,000 jobs. A separate study released this month by the British Columbia Council for International Education (BCCIE) puts the impact of international students in British Columbia alone (Canada’s westernmost province) at CDN $2.1 billion and more than 23,400 jobs. 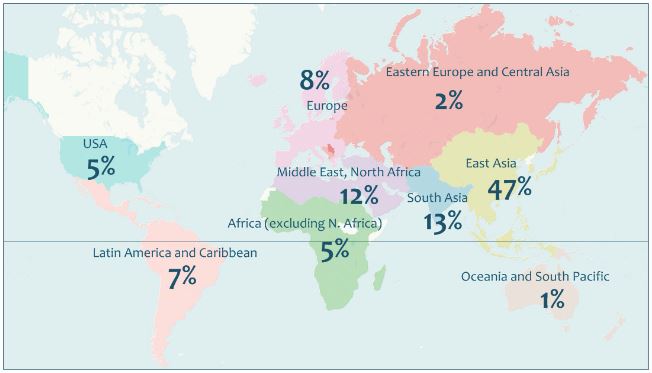 Much like in the US, China was the leading source country in 2012, representing 30% of Canada’s international student population – greater than the percentage accounted for by India, Korea, and Saudi Arabia combined – and the number of Chinese students in Canada grew 20% from 2011 to 2012. The report adds:

“South Asia is the region with the highest growth, with a 217% increase in students between 2008 and 2012, primarily driven by the large growth in the number of Indian students in the last four years. These countries, among other high-growth countries such as Nigeria, Brazil, and Vietnam represent key international education markets that add to the cultural and social fabric of Canada and provide linkages for future business, research and diplomatic partnerships.”

More than half (55%) of international students in Canada are enrolled in university programmes, with the balance distributed across other post-secondary institutions, including colleges and trade schools, secondary schools, and “other.” We can understand this last category to include language studies, but the total enrolment in language studies, whether English or French, is understated in this summary for two reasons:

Students’ perspectives on study in Canada

A World of Learning includes findings from an annual CBIE survey of international students in Canada. The first such survey was conducted in 2012 and this year’s report includes results from the 2013 survey. This year’s survey drew responses from 1,509 students representing 25 institutions.

More to the point, Canada was the first and only choice for 80% of respondents in 2013.

And it seems that students are happy with their choice as both the 2012 and 2013 surveys found a consistently high level of student satisfaction. “Nine out of ten respondents (91%) were either satisfied or very satisfied with their experience in Canada,” notes the report. “96% of students indicated they would definitely or probably recommend Canada as a study destination.”

In terms of the factors that led students to choose Canada for studies abroad, the CBIE survey found:

The survey responses were mixed on the question of the role of international education agents. More than half (53%) of respondents said agents played an important role in their decision but, as the report notes, interesting regional differences can be observed in the survey data.

As these highlights reflect, the 2013 edition of A World of Learning contains a wealth of information on the international student experience in Canada, and on many other aspects of internationalisation in Canadian education. We look forward to tracking the country’s progress as a global study destination – as well as the progress and perceptions of its students – in subsequent reports in the years ahead.