China and India are top source countries for Canada

Universities claim the highest numbers of international students in Canada (41% of new arrivals in 2012), with “other post-secondary” (e.g., colleges, polytechnics, and CÉGEPS) coming in at 25%, and K-12 at 23% of the Canadian total.

The top ten source countries for Canada, representing nearly 70% of annual entries into the country, are:

Students from China and India together represented 37% of the international student entries to Canada in 2012. 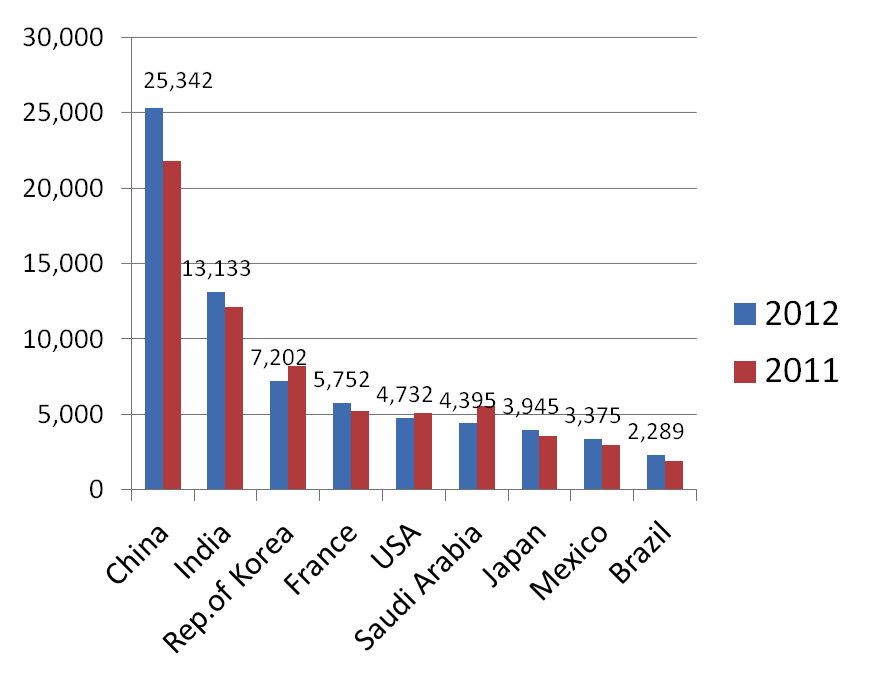 Top source countries of new international student entries to Canada for 2011 and 2012 from Citizenship and Immigration Canada.

CIC noted in a recent presentation at the 2013 ICEF North America in Toronto that “the number of former students choosing to immigrate is increasing” and acknowledged the “growing importance of post-graduation employment.” Growth is driven by demand; there are no international student quotas.

Faced with budget constraints and with a strong mandate to improve processing efficiency, CIC has decided to close visa offices in a number of countries over the last couple of years. The following table documents those closures, as well as the rerouting procedures used to compensate:

Such closures are always a concern for local students, families, and advisors – and with a global average processing time of 76 days for study permit applications, all stakeholders have an interest in seeing processing times reduced where possible. However, CIC reports as well that processing times are low and approval rates high for students applying from many top source countries.

On average, 81% of all study permit applications to Canada were approved in 2012, and 80% of applications were finalised within 42 days.

Citizenship and Immigration also notes that processing times are considerably shorter – on average, 45% shorter in fact – for those students applying online, which is now much easier due to new online services that have been introduced in recent months:

CIC also anticipates that its plan to increase the number of Visa Application Centres (VACs) around the world will further help to improve service to international students wanting to study in Canada. As distinct from Government of Canada visa offices within Canadian embassies or consulates, VACs are managed by private companies or international organisations and are authorised to provide specific services to applicants under a formal agreement with CIC.

Currently, there are 67 VACs in 47 countries; the plan is to expand this network to over 130 locations in 95 countries. Of the plan to expand VACs, Citizenship, Immigration and Multiculturalism Minister Jason Kenney has said:

“Our goal is for there to be a global VAC network, one with worldwide coverage and services standardised across all locations. That way, no matter where you are in the world, you can expect the same service from all the VACs.”

As we reported recently, Canada is also part of the first five-country VAC in Singapore. For more on how VACs can help international students with Canadian study permit applications – as well as where they are in the world – see here.

Suggesting that further service improvements are still to come, Canada’s expanded online visa application services and burgeoning VAC network are taking shape against the backdrop of the Canadian government’s having earmarked CDN $23 million in its latest budget to supporting its national international education strategy and CDN $42 million to improving visa processing for temporary residents including students. See our related article for more background on what steps Canada is taking to boost its competitiveness as a study abroad destination.