Foreign enrolment continues to grow in the Netherlands

The latest data from the Dutch organisation for internationalisation in education – Nuffic – highlights a further increase in degree-seeking international students in the Netherlands for 2018/19.

Nuffic reports that there were 85,955 foreign students from 170 countries enrolled in degree programmes in public institutions in the Netherlands in the 2018/19 academic year. There are two dimensions of growth reflected in this: overall student numbers have increased by just over 12% from 2017/18 and the proportion of international students in Dutch higher education has also risen to 11.5% this year, compared to 10.5% the year before.

The qualifications in these top-line findings are also important. First, this figure reflects only degree-seeking students, as opposed to “credit mobility” – that is, those who visit the Netherlands or an internship or for a semester or year abroad programme – nor does it reflect any enrolment outside of the public higher education system. 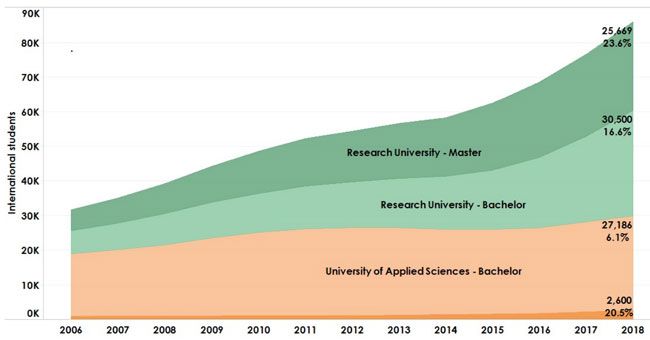 Total number of foreign degree-seeking students in the Netherlands, 2006–2018, by institution type and level of study. Source: Nuffic

Where do students come from?

Nearly three in four foreign students in the Netherlands (73% or 62,932 students) came from European Economic Area (EEA) countries, with the balance coming from outside the EEA. The share of non-EEA students is increasing steadily over the last two years, however, rising from 25% in 2016/17 to 27% in 2018/19.

As the following table reflects, Germany remains, by far, the leading sending market for Dutch higher education. For the last three years, however, Italy has been the fastest-growing market for the Netherlands and it surpassed China as the second-largest sender for the first time in 2018/19. India, Romania, Bulgaria, and Syria round out the top five growth markets this year.

The report adds, “Although Germany and China remain important countries of origin in absolute numbers, their relative importance has decreased over the past years. Back in 2012/13, Germany accounted for 45.5% of all international students in the Netherlands, and China for 8.2%. By 2018/19, their shares have decreased respectively to 26.3% and 5.3%, which means that other countries have grown more in this period, and the diversity of nationalities in the Dutch international student population has increased.”

These changing patterns regarding country or origin are more than a matter of diversifying the student body; they also carry some important implications for the economics of student mobility in the Netherlands. On the one hand, EEA students pay the same tuition fees as Dutch students while non-EEA students pay differential fees set by each university “by cost coverage or break-even calculations”. Further, roughly 25% of all foreign students stay in the Netherlands after graduation and contribute a combined €1.64 billion (US$1.83 billion) per year in taxes and other direct remittances to government. As Nuffic points out, “Graduates from non-EEA countries have a higher average stay rate than EEA graduates, [and] thus contribute relatively more to [government revenues].”

The growing numbers of international students in the Netherlands, their increasing proportion among the country’s higher education population, and the corresponding demand for English-taught programmes has triggered significant public debate in the country.

At various points throughout 2018, the Dutch government signalled its continued commitment to internationalisation but government ministers have also indicated that further conditions or oversight may be placed on higher education institutions in the Netherlands going forward.

Nuffic acknowledges the current political climate in the opening paragraphs of the report: “The inflow of international students has been a central topic of public debate in the last couple of years. The Dutch Ministry of Education and the Dutch universities’ associations…agree that internationalisation contributes to the quality of education and Dutch society in general, recognising, however, that it also creates challenges related to housing, language policy and accessibility of education.”

“We hope that this annual report will help policymakers and other decision makers to arrive at evidence based decisions.”

This entry was posted in Europe, Higher Education, Netherlands, Regions.