The Brazilian study abroad market showed its strength again in 2018 with a third consecutive year of strong growth.

The latest survey data from the Brazilian Educational and Language Travel Association (Belta) gathers responses from 522 education agency offices (470 of which are operated by Belta members). The survey highlights that a record-high 365,000 Brazilian students went abroad in 2018. This amounts to a 20.5% increase over the year before and builds further on the strong growth in outbound numbers from Brazil in 2016 and 2017.

Reflecting the pattern of recent years, Canada, the US, UK, Ireland, and Australia remained the most-popular choices for Brazilian students in 2018. However, Malta, appears among the top six destinations for the first time, a development that Belta attributes to new Maltese policies that open up more opportunities for visiting students to combine study and work. 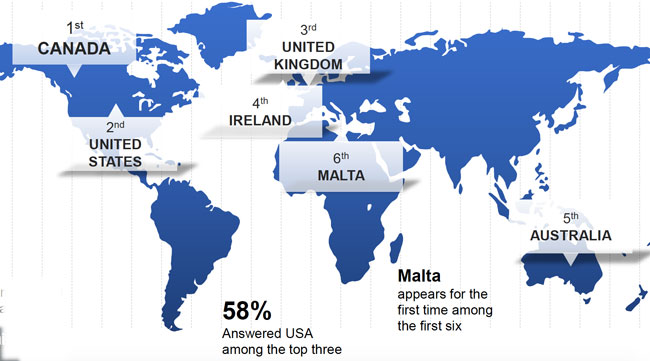 As in previous years, survey respondents cited “favourable exchange rate” as the top factor in their choice of study destination, with preference also given to English-speaking host countries and to those that are seen to offer a high quality of life, policies that allow visiting students to combine work and study, and for which Brazilian students can readily acquire a student visa.

The market remains strongly connected to the students’ longer-term professional goals with the need to learn foreign languages, the need to stand out professionally, and the need to acquire international experience – most often all to stand out in a competitive job market at home – as the main demand drivers for study abroad.

The research also reflects a fairly stable pattern this year in terms of the types of programmes that are most sought after among Brazilian students. Language studies remain the focus with English as the most-popular target language, followed by Spanish, French, and German. The popularity of languages other than English reflects in part a growing interest of Brazilian students of studying abroad, but within Latin America. “Young people have realised that enjoying countries close to ours is an excellent cost – benefit,” says Belta President Maura Leão. “Learning Spanish in Argentina, Chile, or Uruguay can yield unique experiences with the language and close to home. Which causes less anxiety in the student.”

But of note this year is the steady increase in the popularity of undergraduate programmes abroad, which has moved from the 7th position in the table below (as of 2016) to the 4th position last year. Belta attributes this shift in part to the growing number of Brazilian students that are pursuing foreign degrees with full or partial athletic scholarships. The association estimates that as many as 3,000 students were enrolled in degree studies abroad last year with the help of such scholarships. 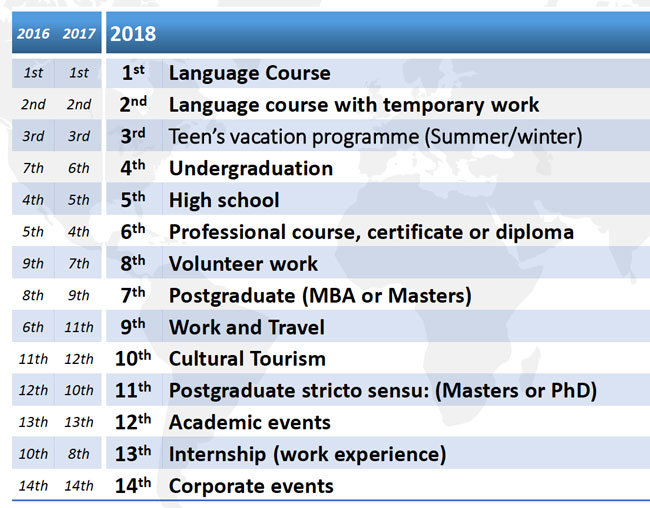 The most-popular programmes of study for Brazilian students as reported by education agents. Source: Belta 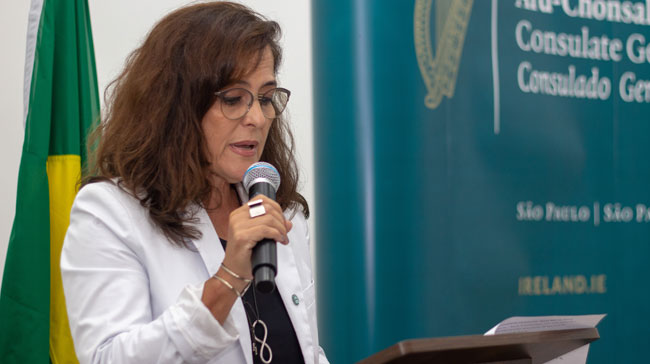 A related Belta survey of nearly 5,000 Brazilian students who went abroad last year reveals that agencies continue to play a critical role in the market. Belta notes that, “Although most students started searching in the Internet and having the first contact with the agency online, 67% of them completed the purchase in the physical agency and the rest bought through online tools. This represents that personal care is still what brings security to this student.”

Overall, 14% of the survey respondents reported booking directly with a school or organisation abroad, with 86% making their study abroad arrangements via an education agency.

The following table expands on this point by highlighting the information sources that Brazilian students say were most influential on their decision to study abroad. The student responses reflect the importance of a broad, and integrated, marketing effort in Brazil that engages with education agencies but also with alumni and parents, and across a variety of online and offline channels.

The most influential information sources as cited by Brazilian students. Source: Belta

This entry was posted in Brazil, Most Popular, Regions, South & Central America.