New data from the German agency association FDSV (Fachverband Deutscher Sprachreise-Veranstalter) estimates modest growth in the number of Germans going abroad for language study in 2017 with 3% increase in bookings compared to the year before. FDSV relies on a member survey for its estimates of market size, and then extrapolates out to project total values for the entire German market.

Keeping that distinction in mind, association members report a 16.4% increase in revenues year-over-year for 2017, against a nearly 13% decline in the number of students going abroad. Reflecting those findings against the entire German market, however, FDSV estimates a modest increase in total outbound (3%, as above) with 165,000 outbound students in 2017 and a total value of €201 million for outbound language travel.

That market valuation, and the increase in revenues reported for 2017, comes in part from higher prices paid for language programmes last year. The average price per booking reported by FDSV members increased to €1,512 in 2017, compared to €1,349 the year before (an increase of 12%). Average duration of study, however, remained unchanged from 2016 at 14 days.

“Good language skills are an important prerequisite for professional qualification and career planning,” says a related commentary from FDSV. “Parents invest more in the education and training of their children and enable their offspring earlier foreign experiences in the form of a language trip.”

Junior travel bookings are still driving the German market, with students 17 years old and younger accounting for six in ten outbound bookings. Perhaps the bigger story this year though is the growth in 50+ segment, which has seen a 50% increase in outbound language travel since 2016 alone, and not makes up nearly 10% of total bookings. 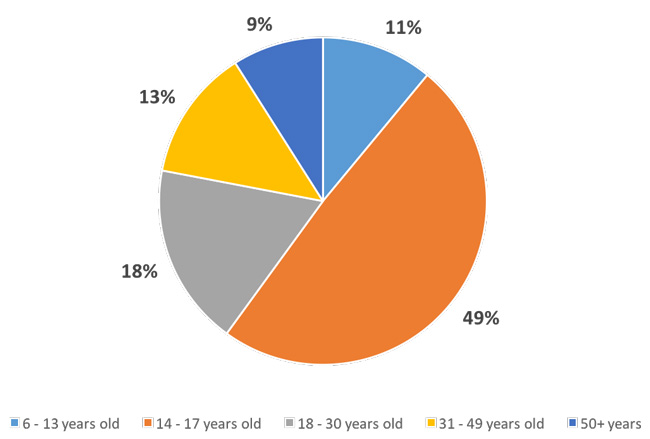 “The interest in language camps in Germany continues to enjoy great popularity,” adds FDSV. “These offerings are not only a good alternative to traditional language study abroad for younger participants or for short stays, but also offer an interesting price-performance ratio. In addition, the safety aspect, the ease of arrival and the proximity to the hometown are an important selection criteria for parents. The increased demand for ’50 plus courses’ is also pleasing, with an increase of 3.09 percentage points.”

As in previous surveys, English remains by far the most common language of study for German students and was the focus of three quarters of all German outbound in 2017. Spanish remains the second most-popular, accounting for 11% of all bookings, and followed by French (7%) and Italian (3%).

Destination choices for German students are also holding steady this year, with the UK alone accounting for nearly half of all outbound students (48%). Malta remains in second place with 14% of all outbound students, followed by France, Spain, and Ireland. As the following chart reflects, however, there are some variations in destination choice between junior and adult language learners. 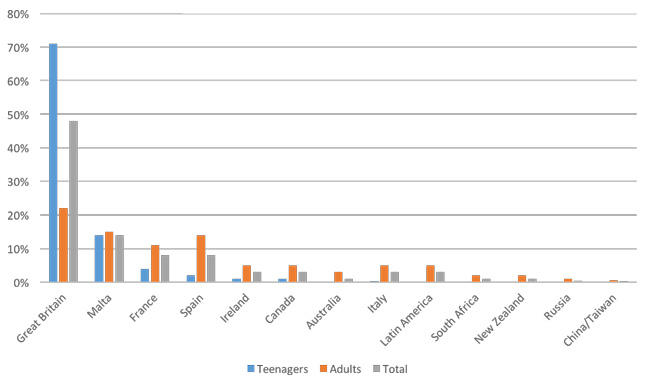 This entry was posted in Europe, Germany, Language Learning, Regions.