Saudi Arabia orders its scholarship students out of Canada

In a move that will disrupt the study programmes of thousands of students, not to mention the fall semesters at many Canadian institutions and schools, Saudi Arabia has ordered its scholarship students to return home from Canada immediately.

The announcement will affect all scholarship students currently enrolled in Canada. The Canadian Bureau for International Education reports that there were just under 10,000 Saudi students in Canada as of 2017, and CNN places the number of current scholarship recipients at 7,000. Both of those numbers are down significantly from even a few years ago when the Saudi government began to wind down the massive King Abdullah Scholarship Programme. The remaining scholarship students have now reportedly been advised to plan to transfer to other countries to continue their studies in the coming academic year.

The move comes amidst a rapidly escalating diplomatic spat between Saudi Arabia and Canada. The Kingdom has accused Canada of “blatant interference” in its domestic affairs. At issue is a August Twitter post by Canada’s Minister of Foreign Affairs, Chrystia Freeland, which objected to the Kingdom’s recent detention of a Saudi activist. 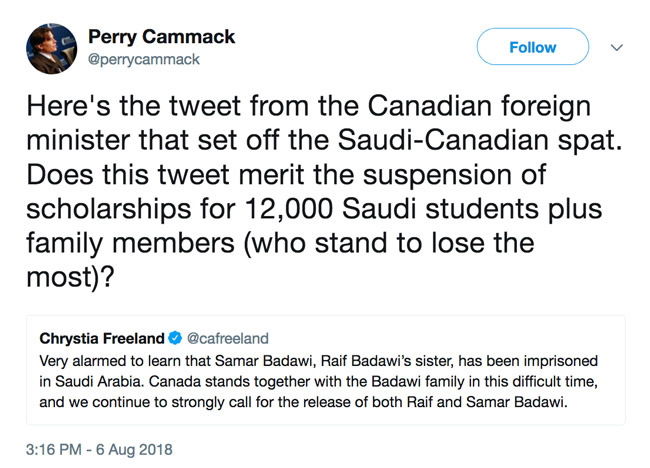 Minister Freeland’s original Twitter post, along with a commentary from Perry Cammack, a fellow in the Middle East Programme at the Carnegie Endowment for International Peace

In response, the Saudi government promptly expelled Canada’s ambassador to the Kingdom, and recalled its own envoy from Canada. The government has also said that, effective immediately, it is “freezing of all new trade and investment between the Kingdom and Canada, while retaining its right to take other measures.”

For its part, the Canadian government has affirmed its original statement and questioned the Saudi response. “We are deeply concerned that Saudi Arabia has expelled Canada’s ambassador in response to Canadian statements in defence of human rights activists detained in the Kingdom,” said Minister Freehand. “Canada will always stand up for the protection of human rights, including women’s rights and freedom of expression around the world. We will never hesitate to promote these values and we believe that this dialogue is critical to international diplomacy.”

The Saudi government, meanwhile, remains firm in its view that Canada is overreaching in this case: “The Canadian position is an open and transparent interference in the internal affairs of the Kingdom of Saudi Arabia and contrary to the most basic international norms and all the charters governing relations between countries,” said an official statement. “It is a grave and unacceptable transgression against the Kingdom’s regulations and procedures, and in violation of the judicial authority in the Kingdom. Throughout its long history, Saudi Arabia has not accepted and will not accept interference in its internal affairs or impose dictates on it from any country. The Canadian position is an attack on Saudi Arabia that requires a firm stance towards it. The Kingdom of Saudi Arabia expresses its absolute and categorical rejection of the position of the Canadian Government.“

Official government sources from the Kingdom have not yet commented publicly on how current scholarship students will be affected, but the suspension of scholarships has been confirmed via a recent news report on the Saudi-owned Al Arabiya news service, which characterises the decision as a “suspension of training, scholarships, and fellowships to Canada and the transfer all its students in that state to other countries.” An education ministry spokesman has also said, via Twitter, that the government is working on an emergency plan to speed the transfer of students to other study destinations.

Canadian educators, along with Saudi students enrolled in Canada, have been left to absorb these latest developments with less than a month to go before the start of the new academic year.

Bessma Momani is a professor at the University of Waterloo and an analyst on Middle East affairs. In a series of related tweets from 6 August, she sets out in stark terms the situation for both students and their institutions. 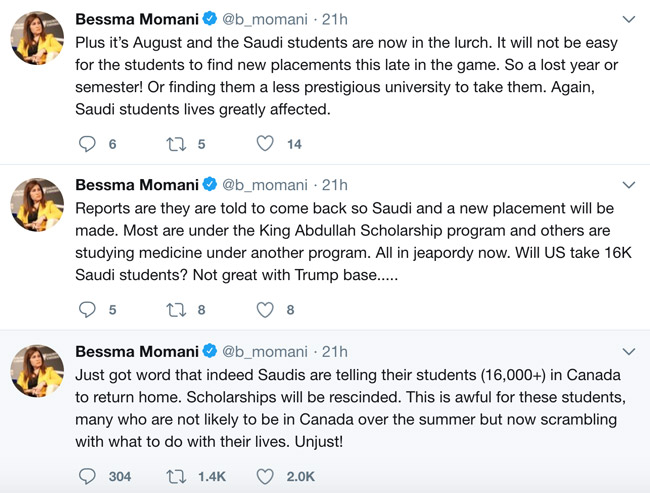 Related reports in Canadian media place the number of affected students in the range of 15,000–16,000. However, official figures from Immigration, Refugees and Citizenship Canada indicate the actual number of Saudi scholarship students in Canada this year is less than 8,000.

Even so, the economic impact of the move will be measured in the millions of dollars. “For Canadian universities, this is a significant hit,” said Thomas Juneau, an assistant professor at the University of Ottawa’s Graduate School of Public and International Affairs, in an interview this week with the Globe & Mail newspaper.