A new paper commissioned by Universities UK raises some important questions about the international competitiveness of British higher education. In Five Little-known Facts about International Student Mobility to the UK, Education Insight Founder Janet Ilieva argues that, “The global appeal of UK higher education is a national asset,” and that, “Preserving and building on it should be a national priority.”

The analysis presented throughout the paper, however, paints a picture of declining competitiveness over the past decade. “International student mobility flows to the UK decelerated significantly in the aftermath of the global financial crisis of 2008/09,” notes the report. Indeed, and as the following chart reflects, foreign enrolment in British higher education has been essentially flat since 2010/11. 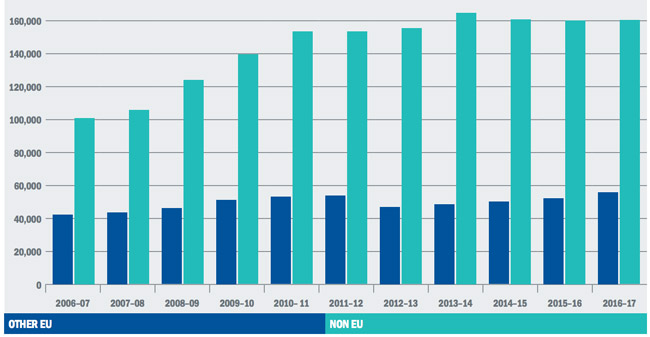 From 2010/11 onward, UK universities report greater enrolment growth for non-EU students relative to those arriving from elsewhere in the EU. But that growth pattern sputtered between 2010/11 and 2012/13, mainly as a result of declining Indian numbers, and non-EU enrolment growth has levelled out in the years since.

Meanwhile, other major study destinations – notably Australia, Canada, and China – have registered much more dramatic growth in foreign enrolment over the same period. Driven in part by continuing strong demand from India, the number of international students in Canada has increased by just under 120% between 2010 and 2017, and by 41% between 2015 and 2017 alone. Australia’s international higher education enrolment grew by 15% between 2016 and 2017. And the number of visiting students in Chinese degree programmes also grew by 15% last year.

These observations are reinforced by a recent research paper from the Centre for Global Higher Education at University College London. As the title suggests, The UK in the global student market: second place for how much longer? offers some pointed commentary on the narrowing gap between the UK and competing study destinations. The paper focuses on Australia’s growth in particular, but, as the recent-year statistics we have noted above suggest, the same observations of increasing competitiveness could also be made of China and Canada.

The paper’s author, Professor Simon Marginson, comments, “What we are seeing is a seismic shift in the global student market. UK higher education is still highly valued internationally, but the government has held down the growth of international student numbers for five years, by limiting new student numbers and post-study work visas. Meanwhile, competitor nations are strongly promoting their international education.”

In Professor Marginson’s analysis, Australia surpassed the UK, in terms of the number of European students it attracted, in 2016. Given the current growth rates of both countries, he projects that foreign enrolment in Australian higher education will exceed that of the UK’s by 2019. “Unless UK policy changes tack, the nation will continue to lose global market share,” he adds. “When the data for 2018 come in, it is possible that Australia will have already passed the UK in total international student numbers (both Europe and rest of world together).”

Ms Ilieva closes her paper for Universities UK with a call for greater coordination in international marketing between the country’s higher education institutions and the British government. She adds, “This should include better post study work opportunities, best and more comprehensive promotion of the UK as a study destination; better understanding of the factors affecting demand, particularly at postgraduate level; and a better understanding of the links between [transnational education, or TNE] and onshore recruitment and of the opportunities provided by TNE to diversify the reach of UK higher education in geographical terms.”

This recommendation is grounded in a number of important market factors, including the pending impact of Brexit (and any resulting changes in fee status for EU students in the UK), the policy and political climate in the US (including any changes to post-study work rights for international students), and ongoing fluctuations in world currency and commodities markets.

In commenting on the report, Universities UK International Director Vivienne Stern said: “International students bring vitality and diversity to our campuses and we hugely value the contribution they make to our institutions. The facts in this report…indicate the need for a government-led international education strategy that can help the sector create an environment that attracts and retains talented international students.”