The economist and Nobel laureate Joseph Stiglitz has been widely quoted as predicting that urbanisation in China is one of two transformative forces that will most impact global prosperity in the 21st century (the other: technological innovation in the US).

However you may feel about economists, the movement of greater numbers of Chinese to a growing number of large Chinese cities is an unmistakable trend, and notable in part for its sheer scale. Forecasters expect that roughly 70% of the country’s population – or about a billion people – will be living in cities by 2030. And a new report from The Brookings Institution only underscores the importance of the continuing migration toward large cities throughout the country.

Brookings actively tracks the performance of the world’s 300 largest metropolitan economies, as measured by GDP and employment data. In 2014, less than 50 of the top 300 cities were found in China. In an updated tracking study released earlier this month, China was home to just over a third (103) of the total. The pace of this change is being driven by the still-hot economic performance of many of China’s cities, which as a group continue to outpace the growth of large cities elsewhere in the world.

In a recognition of the complexity and variety of cities within China, Brookings has classified this field of more than 100 large urban centres into five “city types” based on size, composition of the local economy, and growth patterns. They include: 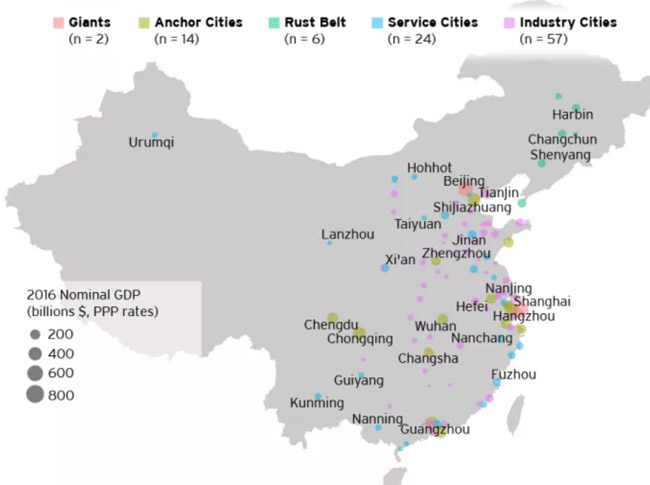 The five categories of Chinese cities as defined by The Brookings Institution. Source: Brookings

The report notes as well that each category of city demonstrates different employment and growth patterns. “While Beijing and Shanghai still get most of the headlines, they no longer serve as the main engines of national economic growth,” says Brookings. “Domestic migration has been shifting from Beijing and Shanghai to smaller cities for a decade…The gap in average living standards (measured by GDP per capita) between the two Giants and other Chinese metro areas is also shrinking. Since 2000, GDP per capita in China’s 101 metro areas outside of Beijing and Shanghai rose twice as fast as in the two Giants.”

This relationship between Beijing and Shanghai and the other categories of urban centres in China is illustrated in the charts below. They reflect that growth in employment, and also in economic output, in Beijing in Shanghai has been eclipsed by that of other Chinese cities. 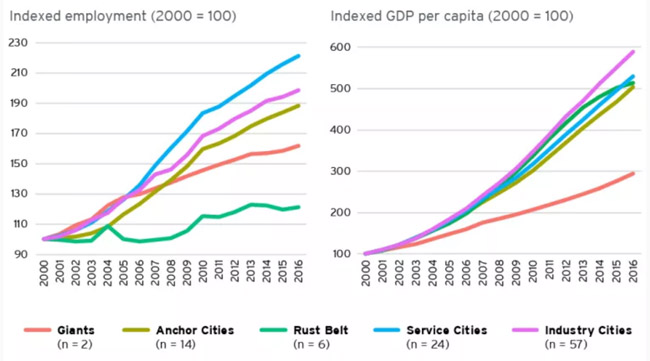 The performance of both “Anchor” and “Service” cities are particularly notable in the charts above, in that they reflect the continuing transformation of the Chinese economy. As Brookings says of the “Anchor” category: “These metro areas are usually the regional hubs for transportation, with well-connected domestic high-speed rail and international airports or seaports. They also house many of the country’s tech unicorns, including Alibaba (Hangzhou), Tencent (Shenzhen), and Huawei (Shenzhen). As China’s Anchor Cities transition toward higher-value industries, skilled labor shortages are forcing them to aggressively compete for talented workers, including from Beijing and Shanghai.”

A similar pattern is playing out in “Service” cities, each of which has relied more heavily on industrial activity in the past and would have at one time been classed as “Industrial” cities. Strictly from a recruitment perspective, this analysis highlights a growing field of robust metropolitan areas throughout the country – second-tier cities and beyond – that will likely play a greater role in Chinese student mobility in the decade ahead.

More broadly, economic growth and demographic social and trends in China are stories that will increasingly be told through the country’s cities. And beyond its borders, the scale and reach of China’s urban centres will play a greater role in shaping global patterns and performance as well.

This entry was posted in Asia, China, Regions, Research.