2017 marks another year of growth for Ireland’s ELT sector

In the last five years alone, the number of international English Language Training (ELT) students in Ireland has jumped by 30,000 thanks to enrolment growth of 10% in 2015, 11% in 2016, and the just-announced 8% increase for 2017. Last year also saw a 19% increase over 2016 in total student weeks across the 60+ ELT schools that are members of the peak body Marketing English in Ireland (MEI).

Students from all over the world

While three-quarters of ELT students come to Ireland from the EU/EEA region, 2017 saw strong gains in students from outside the European Union, which reflects a strategic focus among MEI member schools in recent years on new and emerging markets. Fully 118 countries were represented in student enrolments in 2017 versus 101 in 2016 and 89 in 2015.

Of the sector’s growth and expansion into new markets, David O’Grady, CEO of Marketing English in Ireland, said that it reflects the “diverse offering that our schools and colleges have for students from all over the world to come to Ireland, to study and to experience our culture and our people.”

Students from outside of the EU/EEA accounted for the strongest growth in Stage (students aged 12–16 staying one week out of season) and Junior (students aged 12–17 staying one-two weeks) courses as well as Adult courses. For example, while there was modest growth from 2016 to 2017 in enrolments in Stage/Junior courses (3%), there was growth of 26% contributed by non-EU students who did not require a study visa and 16% growth in non-EU students who did require a visa. EU/EEA students, though they represent the vast majority of Stage/Junior students, grew by only 2%.

Similarly, overall growth in Adult (students aged 18+) student numbers was boosted by a 28% increase in non-EU students who were not required to have a visa to study in Ireland. The overall growth in the Adult category was 13%. 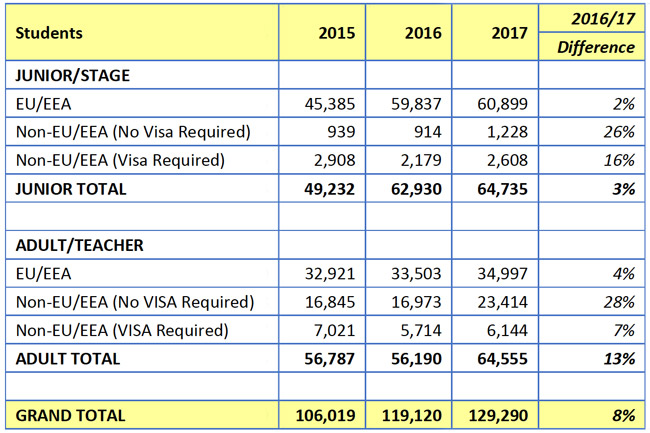 Overall student weeks for the year increased by 19% over 2016. 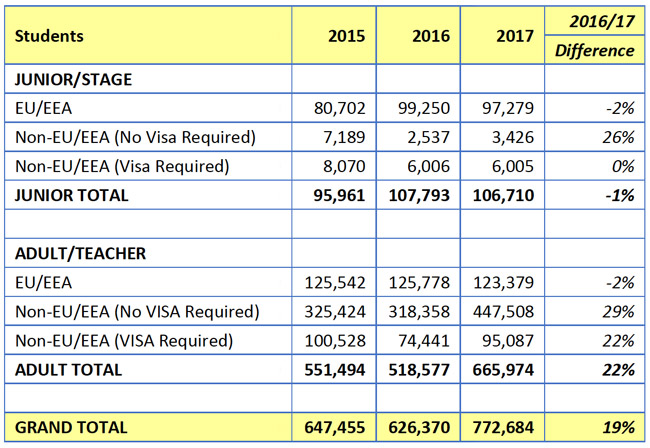 In the Junior sector, Italy, France, Spain, and Russia contribute the bulk (90%) of students.

Brazil is also notable for how many weeks its students are staying in Ireland: Brazilians contribute half (49%) of total student weeks in the Adult sector.

A diversification strategy to mitigate risk

The MEI press release notes that there is “recognition at Government level that the international education sector is hugely important for Ireland and the contribution to the Irish economy from the English Language Training sector alone is worth €762 million per annum.”

Mr O’Grady notes that this significant contribution is only becoming larger with each consecutive year of growth. He attributes much of the growth to the increased emphasis among MEI member schools to recruit in new markets “beyond the traditionally strong markets of Italy, Spain and France” and singled out Turkey as a country in which MEI has been establishing a presence.

Mr O’Grady concludes that diversification as a way to remain competitive in a market “that is extremely sensitive to currency fluctuations and international uncertainty.”

This entry was posted in Europe, Ireland, Language Learning, Regions.