The latest enrolment and admissions data from the Council of Graduate Schools (CGS) finds that both international graduate applications and first-time enrolments in US graduate programmes declined between fall 2016 and fall 2017. Application volumes fell by 3% year over year while commencements were off more marginally with a 1% dip. This marks the first time in over a decade that both of these key indicators have declined for US graduate schools.

This latest data extends a pattern of slowing growth for foreign application volumes and commencements in US graduate schools over the last two years.

As the following figures illustrate, the significance of these latest findings is that both key metrics are in decline, a reversal that is thrown into sharper relief when viewed over the last three admissions cycles for 2015, 2016, and 2017. 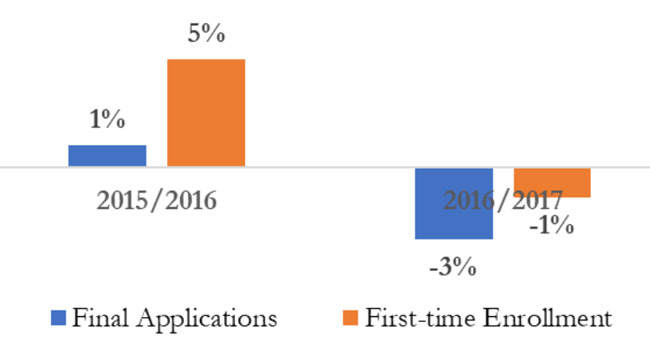 The CGS report acknowledges the role that the current political climate – particularly, the current administration’s high-profile travel ban affecting citizens of several Muslim-majority countries – in the US may have played in this trend. “The graduate education community remains concerned that the ban – in its substance and rhetoric – might have hampered the global competitiveness of the United States and its ability to attract the best and brightest prospective international graduate students,” notes the report. “The travel ban itself directly affects nationals from relatively few countries; however…the policy has generated ambiguity and uncertainty for current and prospective international graduate students more broadly.”

Even so, it is too early to quantify the true impact of US policy directions and CGS is quick to point out that other factors, including the economies and labour-force requirements in important sending markets, are also playing a part in this year’s downward trend.

The report also points out that international students continue to account for a significant proportion of total graduate enrolment in the US (24% as of fall 2017). Meanwhile, other important metrics for US graduate schools – including application acceptance rates and admission yield rates for international students – have held quite steady from fall 2016 to fall 2017. As the report concludes, “The data from the fall 2017 admission cycle suggest that despite a modest decline in the applications and first-time enrolments of international graduate students, these students remain a significant part of US graduate education.”

CGS President Suzanne Ortega adds, “While the declines we see this year are concerning, the good news is that the application acceptance rates and admission yield rates are comparable to last year. This suggests that prospective international graduate students remain highly likely to accept offers of admission to US graduate schools. This may be due to increased efforts on the part of graduate schools and universities to assure international students that they will be welcomed and supported.”

Not surprisingly, the majority of foreign graduate students in the US (i.e., more than seven out of ten) are from Asia. China remains the number one sending market as of fall 2017 and accounts for a third of all foreign enrolment in US graduate schools. India, at 25% of total enrolment, is the other key sending market and has been an important driver of recent-year growth.

All the more notable then that this year’s CGS survey highlights that Indian numbers have fallen off more sharply between fall 2016 and fall 2017, with application volumes and commencements declining by 15% and 13% respectively year over year. This represents the first recorded drop in graduate applications from India since fall 2012.

Needless to say, the longer-term trends around Indian enrolment in advanced studies in the US will be a key factor for American institutions going forward. Outbound mobility growth from China has slowed over the last several years and the continued overall expansion of application volumes and enrolment has been driven in large part by India from about 2012 on.

These trends in foreign graduate enrolment are unfolding within a broader context in which the US remains far and away the world’s leading international study destination. As the latest Open Doors data reflects, total foreign enrolment reached a record high of 1.08 million students in 2016/17 (a 3.4% increase over the year before). And the economic and cultural impacts of that sizeable population of mobile students are profound. The US Department of Commerce, for example, estimates that international students spent US$39 billion in the US in 2016 on tuition, room and board, and other living expenses.