US institutions reporting variable declines in admissions yield for fall 2017

A new survey of US colleges finds that the international admissions outlook for fall 2017 is better than many had expected. The Institute of International Education (IIE) – in collaboration with the American Association of Collegiate Registrars and Admission Officers (AACRAO), the Council of Graduate Schools (CGS), the National Association for College Admission Counseling (NACAC), and NAFSA – has compiled responses from 165 colleges and universities for a series of important observations about admissions yield for the coming academic year.

Needless to say, the current political context in the US continues to be an important backdrop for how admissions trends play out this year. “Uncertainty plays a large role in the admission cycle as the start of the 2017/18 academic year draws near,” notes IIE. “Recent debates over visa and immigration policy have raised concerns among US higher education institutions regarding the desire and ability of international students to travel to the United States for their education.”

In an admissions context, “yield” refers to the percentage of admitted students who actually enrol, and, as such, it is a key metric in enrolment management. The 165 institutions who responded to the May 2017 survey represent only a fraction of the more than 4,000 higher education institutions in the US, but the survey nevertheless provides an important window into emerging trends for 2017/18.

Responding institutions indicate that overall undergraduate yield has dipped slightly, from 26% in fall 2016 to 24% for fall 2017. IIE points out, however, that institutions are reporting a similar modest drop in yield for domestic students this year as well. The report notes, “Among domestic students, today’s yield is lower than it was fifteen years ago as students apply and are accepted to more institutions than in previous years. While there is no definitive national data on the factors impacting international student yield, it may be the case that international student yield trends are driven by similar application patterns as domestic students.”

IIE is careful to note that this decline is not being uniformly felt across US higher education and that important variations can be observed by type of institution, level of study, and also by state. Of particular note, and as the following chart illustrates, yield rates appear to have fallen more sharply for graduate programmes than for undergraduate degrees. 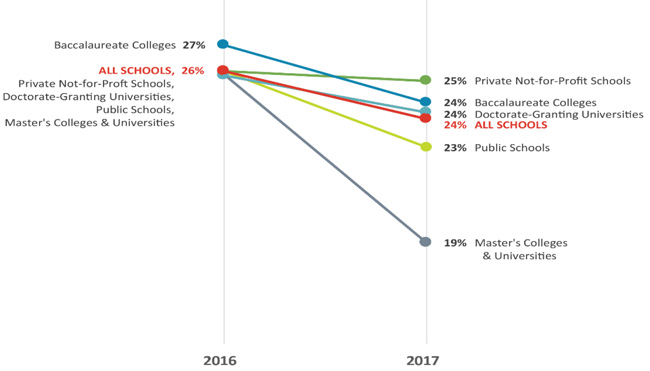 Change in international admissions yield for US institutions by institutional type, fall 2016 and fall 2017. Source: IIE

As the chart suggests, master’s-level enrolment will be a key trend to watch in the US this year. A parallel survey by CGS (also conducted over late-May and early June this year) found that 46% of responding graduate deans reported “substantial downward changes in admission yields for international students” for fall 2017. CGS adds, “Given that the large majority of international graduate students are offered admission into master’s degree programs, this may have substantial implications for first-time enrolment of international graduate students for fall 2017.”

The IIE survey responses indicate that admissions yield in the top four host states – California, New York, Texas, and Massachusetts – largely compare well to national averages. Texas is the clear exception in this respect, with a reported decline in yield from 44% in 2016 to 35% in 2017. (But even so this leaves the yield rate in Texas well above the national average for 2017/18.)

In contrast to that sharp decline in Texas, reported yield rates from institutions in New York and Massachusetts were stable (relative to 2016 levels), and institutions in California indicated a slight increase in yield for the coming year.

What does it mean?

A lot of the concern around yield for this year is focused on students from the Middle East, and to a lesser extent India. Three in ten survey respondents were “very concerned” that Middle Eastern students who had accepted admissions offers may not arrive on campus to start their programmes this fall. Roughly 20% of respondents expressed similar concerns regarding inbound Indian students for fall 2017.

And of course these survey results arrive on the heels of earlier reports indicating declining volumes of applications for fall 2017. That remains part of the story as we draw closer to fall programme commencements – in particular, the marginally lower yields indicated in the IIE study are off of a reduced base of application volumes and, in many cases, of reduced offer volumes as well. There is some indication that each of those top-line admissions metrics appears to be trending down for 2017/18, but we can also observe that those declines are not uniform. Some institutions or programmes or states are projecting declines, but others anticipate increased numbers.

With such a mixed picture going into the year, we can only take the overall impression here that while numbers may be down slightly this year the significant decline that many feared appears less likely to materialise. As always, we will continue to monitor the actual enrolment data through the balance of this year and into 2018 for a complete view of where international student numbers are going in the US.