US ELT enrolment down sharply in 2016

New enrolment data reveals a steep decline in both student numbers and student weeks for Intensive English Programmes (IEPs) in the US. Released during the NAFSA 2017 conference in Los Angeles this week, the latest Intensive English Programme Survey data from the Institute of International Education (IIE) counts just over 108,000 IEP students in America in 2016, and total bookings of about 1.5 million student weeks.

In introducing the latest trend data this week, IIE Research Specialist Julie Baer noted that IEP enrolment in the US, as a proportion of total international enrolment in the country, has remained relatively stable over the last 15 years, in the range of 3-4%. Average stay per student varies by region but has also been relatively stable in recent years at 14 weeks per student.

However, Ms Baer points out that historically IEP enrolment is also more sensitive to changing market conditions and tends to fluctuate more widely year-over-year. “This is likely due to the very nature of the differences between international students who are coming for multi-year stays to pursue degrees, and language programmes of shorter duration that are more subject to currency fluctuations or other factors,” she notes.

Year-to-year fluctuations in total international enrolment as well as IEP enrolment in the US, 2000/01–2015/16. Source: IIE

IIE reports that all sending regions for US IEP declined this year, with the two greatest drops recorded by the Middle East and North Africa (down 43%) and Latin America (off by 24%).

Underlying that regional pattern is the performance of top sending markets for the US. As is the case in most leading study destinations, IEP enrolment in America is highly concentrated by source market with the top five senders providing more than six in ten (62%) of all IEP students in the country. And student numbers for all of the top ten sending markets for US IEPs declined in 2016, with one exception: Mexico.

The rest of the top ten table is composed as follows:

The notable changes within the top ten senders for 2016 include:

The following chart expands on these current-year highlights with an overview of the changing composition of IEP enrolment in the US over the last five years. 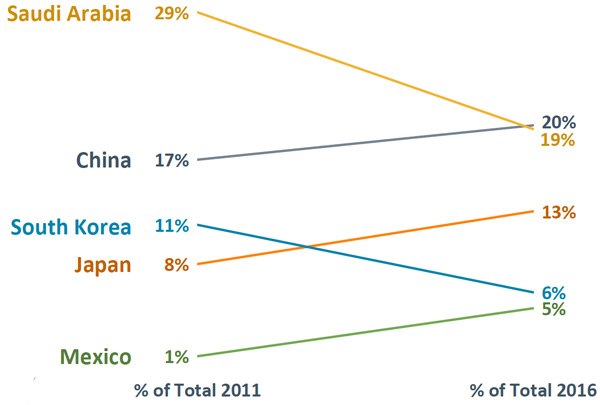 Top five sending markets for US IEPs, as a percentage of total enrolment, 2011 and 2016. Source: IIE

As the graph also reflects, Mexico was the big mover in terms of growth markets for this year, and the only top ten source to demonstrate a significant increase for 2016. Mexican student numbers in American IEPs increased by 40% and student weeks by 29%.

A big part of the story here is the important role that government funding programmes have played in driving language programme enrolment in the US. The recent-year declines in Saudi Arabian and Brazilian enrolment are directly tied to changes in funding programmes, whereas the expanding enrolment from Mexico arises in part from the advent of large-scale mobility programmes between the US and Mexico.

“One of the most striking things we’ve seen this year is change in government funding programmes,” adds Ms Baer. “In the early 2000s we had seen a steady number of IEP students coming from Mexico, ranging from about 500 to 1,000 [per year].” But as the following timeline illustrates, the introduction of new mobility initiatives has triggered significant enrolment growth over the last four years, and between 2013/2014 and 2015/2016 in particular.

Mexican enrolment in US IEPs in relation to major mobility initiatives, 2002–2016. Source: IIE

The IIE findings for 2016 are echoed by a further survey of EnglishUSA members conducted in spring 2017. A majority of members for the peak IEP body are reporting enrolment declines through the first half of 2017, and most are also anticipating that numbers for summer and fall will drop off relative to 2016.

The survey respondents attributed the decline to the political and policy environment in the US, the sharp decreases in government-sponsored students (particularly from Saudi Arabia and Brazil), currency exchange values, and increased competition.

However, EnglishUSA President Patricia Szasz noted as well that member programmes are moving to counter some of these challenging trading conditions by opening new, innovative programmes. As indicated in the 2017 survey responses, EnglishUSA members are increasing their short-term study options, launching new specialised programmes, establishing new pathways and partnerships, expanding their engagement with international agents, and experimenting with price discounting.

The current-year results set the stage for something of a reset in IEP programming and recruitment in the US. After a heavy reliance on government-sponsored students in recent years, it appears that US language programmes are now moving to establish a new competitive footing going forward.