Recent forecasts suggest that Finland can expect a decline in international enrolment this year, but some recruiters are already looking ahead with ambitious plans to draw greater numbers of students from outside the European Union.

The country is in the midst of adjusting to a new fee policy for non-EU students. As we reported last year, and after a protracted “will they or won’t they” process, new legislation came into effect on 1 January 2016 that imposed fees for students from outside the EU.

Those new tuition fees are mandatory as of 1 August 2017, but Finnish institutions have also been free to introduce new international fees since last January. The new fees apply to students in “foreign-language programmes” (as opposed to those offered in the domestic languages of Finnish, Swedish and Sámi), and highlight that many students from outside the EU are enrolled in English-medium studies in Finland.

With the example of neighbouring Sweden firmly in mind – a country that introduced foreign student fees in 2011 and saw enrolment promptly fall off by 80% – many in Finland are anticipating a reduction in foreign student numbers for this year. It will be some time before final numbers for 2017/18 are available but the early indicators are that the drop-off could be as much as 30–40%.

In the wake of the new tuition policy, the volume of non-EU applications to Finnish institutions fell off sharply through fall 2016. The Finnish National Agency for Education/Centre for International Mobility (CIMO) reports that the number of foreign applications for 2017/18 commencements was down by nearly 32% compared to the year before.

While the actual effects of the new tuition policy will vary from institution to institution, many recruiters are also anticipating declines in the order of 30-40% for the 2017/18 academic year.

Even as Finnish educators brace for an enrolment setback this year, plans are also underfoot to restore and expand international student numbers. Many institutions are taking steps to sharpen international recruitment strategies and to increase financial aid for foreign students.

And a new private-sector initiative – Edunation – has recently set out a bold vision to build non-EU enrolment in Finland to 100,000 students by 2020.

Edunation is a new venture from Study Advisory, a study search platform with offices in both China and Finland. Its founders anticipate a heavy promotion of Finnish education online, and especially targeted to students in Asia, and clearly intend to be a catalyst for improving policy and processes for foreign students in Finland.

Edunation’s board chair and co-founder Tuomas Kauppinen told Finnish broadcaster Yle recently that, in order to reach that ambitious 100,000-student target, Finnish application and visa processes for foreign students will have to become more streamlined.

“The Finnish entrance exam system is unique in the world, and can be an obstacle for many,” says Mr Kauppinen. “The general application period is relatively early in the year, and the decision about whether a student has been granted a study place can take a really long time.”

Another recent report from Yle highlights that tuition fees for non-EU students are already highly variable across the country.

Particularly within universities of applied sciences (or UAS, these institutions can understood to be comparable to polytechnics in other countries), fees currently range from €4,000–€13,000 per semester with the national average settling in around €8,000 per semester. However, many institutions are also introducing tuition rebates for foreign students, in some cases tied to academic performance.

“At Lapland UAS, which has campuses in Kemi, Tornio and Rovaniemi, foreign students may obtain stipends covering as much as 80% of tuition fees,” reports Yle. “In contrast those at Helsinki’s Haaga-Helia will have to make do with grants covering up to one fifth of their fees.”

At the University of Helsinki, meanwhile, non-EU fees range from €10,000–€25,000 per academic year, with other universities announcing fees between €10,000 and €15,000 per year. As with the tuition rebate policies emerging at UAS’s, Finnish institutions are also beginning to introduce scholarship programmes for foreign students. At Helsinki, for example, varying levels of scholarship support are available, including a small number of fully funded awards for study and living costs.

Most come from Asia or Europe

The Finnish National Agency for Education reports that there were 20,353 foreign students enrolled in Finnish higher education in 2015, 76% of which came from outside the EU/European Economic Area. Most students come from non-EU/EEA countries in Europe, or from Asia – slightly more than 40% from each region.

The National Agency for Education explains, “China is the single most common country of origin in universities, Russia in UAS’s. The most common countries of origin in both university sectors have changed over the past ten years or so. With the exception of Russia, European countries have disappeared from the top ten or moved down on the list. Vietnam and Nepal have shot to the top, particularly in the UAS sector. China and Russia have traditionally held top positions in the list of countries of origin. This is still the case in the traditional universities, whereas in UAS’s, China has lost its position at the top, having been overtaken by Russia, Vietnam and Nepal.” 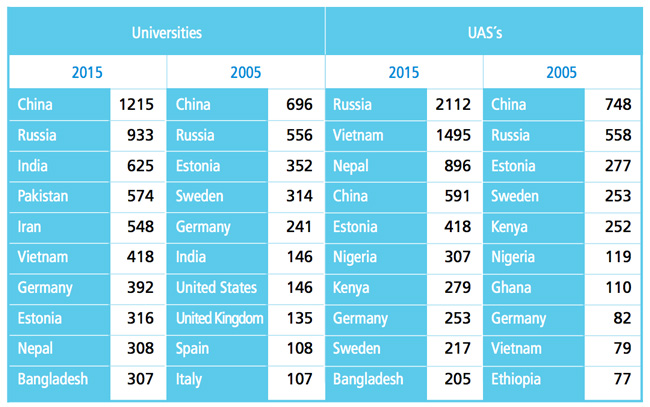 The changing composition of international enrolment in Finnish universities and universities of applied sciences, 2005 and 2015. Source: Finnish National Agency for Education, CIMO

As the following chart reflects, most foreign students in Finland are enrolled in undergraduate programmes in a UAS or in master’s degrees offered by universities. “You can also study for a Bachelor level degree in a traditional university and for a master-level degree in a UAS,” adds CIMO. “However, there are few study programmes available in English at these levels, so they have few foreign students.” 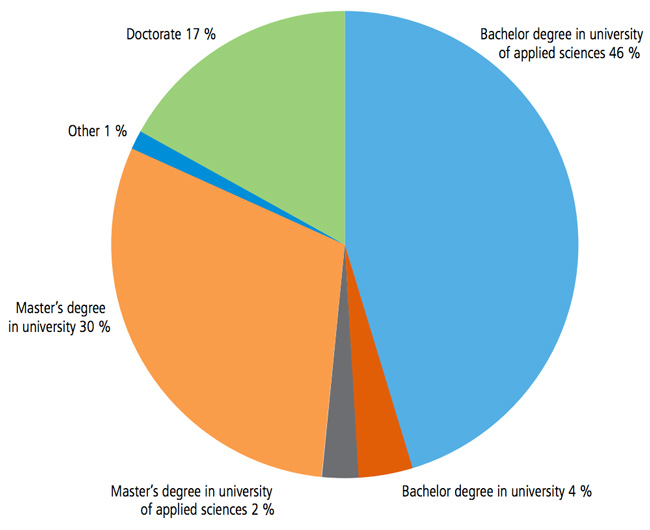 This entry was posted in Europe, Finland, Higher Education, Most Popular, Regions.