A new study from AFS Intercultural Programs provides some fresh insights into the perspective of younger millennials on study abroad.

Mapping Generation Z: Attitudes Toward International Education Programs surveyed 5,255 students in 27 countries between March and December 2016. The survey finds that six in ten Gen Z respondents – that is, those aged 13-to-18 years old – have considered study abroad. With some variation by home country, between 57% and 75% indicated that their main motivation in going abroad was to seek out new cultural experiences.

“Research indicates over and over that Generation Z is more focused on adding global to their personal identity than any other generation,” says AFS CEO Daniel Obst. “The really good news is that despite the current world events that may signal to a young person that the world is not always a friendly place, Gen Z youth want to go out and experience a world that is larger and different than their own.”

“What’s more, Gen Z students don’t just want to simply travel to other countries; they are looking for authentic experiences through the eyes of local people. These are the adventures and stories they want to experience and share with others.”

We note that with its wide geographic distribution the per-country survey samples averaged under 200 prospective students per market. Even so, the results are an interesting directional indicator of student perspectives in this age group, and they highlight an important contrast in student motivations among younger prospects (who are driven by an interest in cultural exploration) and college-aged students, who demonstrate a much stronger focus on employability and employment outcomes.

AFS segmented the survey respondents into four broad groups, based on financial standing and also underlying motivations and goals:

The following chart shows a broad segmentation of all AFS survey respondents, and illustrates the emphasis that 13-to-18-year-olds place on cultural exploration. 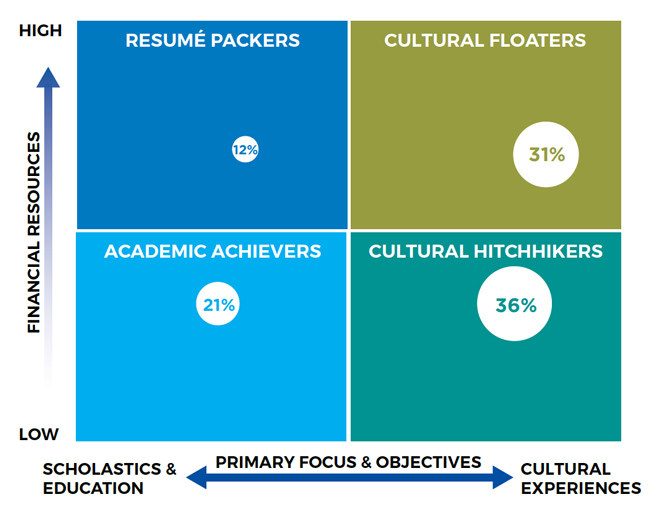 Respondents were also segmented across the four groups by country of origin and we see that distribution mapped in a second chart below. 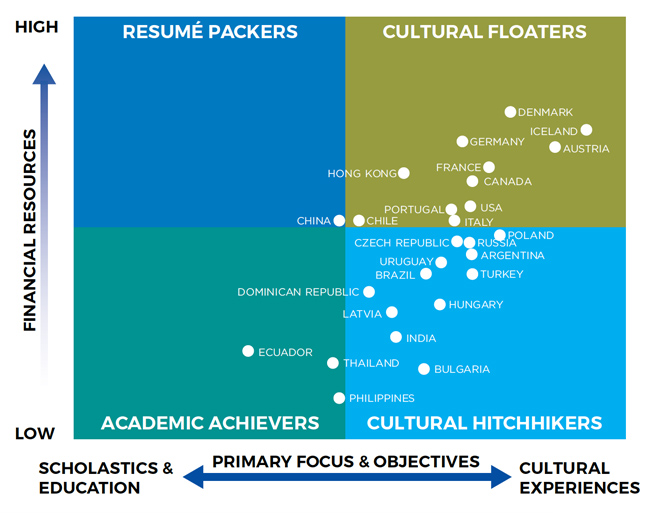 Segmentation of survey respondents by country of origin. Source: AFS

Mr Obst adds, “The geographic spread of the motivations [is] interesting, especially in countries that registered more ‘Resume Packers.’ These countries place a high priority on international experiences for future career success. I expect we will see more Resume Packers in the future as students at a younger age become more aware (from their schools, parents and others) of the value of international exposure to achieving their future goals – starting with admission into higher education.”

Not surprisingly, some of the traditional leading study destinations – including the US, UK, and Australia – were among the most sought-after among survey respondents.

Aside from price, respondents gave the greatest weight to the reputation of the host country, English-medium instruction, and the reputation of the host school in terms of factors affecting their study abroad planning. In keeping with much other contemporary research on millennials, respondents also indicated that traditional advertising and student fairs had a relatively modest impact on their decision making. “This supports the notional significance of product authenticity for Generation Z, demonstrated in their willingness to go beyond initial impressions to gain a better understanding of substantive specifics and characteristics before making decisions,” notes the study report.

“The reputation of the hosting school is still an important factor, although not at the top of the mind of Gen Z, according to the results from our survey. This is in line with the deeply rooted ideas that school-level exchange is as much of an academic as of an explorative opportunity offering tremendous potential for character growth and development beyond just academics,” says lead researcher Hristo Banov.

“We hope the findings will help inform the marketing efforts in the international education industry. One of the more unexpected results was that Gen Z students are not inclined to seek advice and guidance from their local schools and teachers at the beginning stages of the application process,” he adds.

“We believe that these attitudes change once the student decides to go abroad and is faced with various administrative processes around accreditation and re-entry in the original school, but our results clearly point out that the initial interest and motivation most frequently originate outside of school.”

More than half of respondents (52%) said that they had concerns about safety and security when considering study abroad. This surpasses the weighting that students gave to other potential roadblocks, including fear of isolation (50%), homesickness (48%), and discrimination (34%).

“The data sheds light on the acute awareness that Generation Z exhibits around the events affecting global security,” adds Mr Banov. “As it is, the youth and student travel industry bolsters a variety of best practices to keep participants safe. It is of utmost importance that we continue to demonstrate strong understanding of risk management and safety along with an unwavering commitment to empowering global citizens ready to embrace the ideas of intercultural understanding and acceptance.”

For additional background on marketing to millennials, please see:

This entry was posted in Research, Youth Trends.