These are among the top-level findings in the latest statistical report from Campus France. The report contains detailed insights into the composition of France’s foreign student base for 2015/16.

It also makes a number of observations with respect to France’s relative market position as a major study destination, and in this respect the report needs to be read with some caution. There is a larger context for this year’s Campus France data in that while foreign enrolment is indeed growing in France, it continues to grow much more slowly than is the case in other leading destinations.

As we pointed out last year, France has been losing market share and slipping down the table of leading study destinations over the last several years. It is now the sixth-ranked global destination after the US, the UK, China, Australia, and Canada, and has ceded its previous position as the leading non-English-speaking destination to China. Further, both Germany (301,000 students in 2015) and Russia (283,000 students in 2014/15) have also been growing their foreign enrolments more quickly. If that trend continues, both will likely surpass France among leading European destinations in the coming years.

Russia, for example, has tripled its foreign enrolment over the past decade, and its average annual growth during that period is nearly 10% per year. Meanwhile, Germany has seen its foreign student numbers increase by more than 30% over the last decade as well, and has booked annual growth of 6% or better in each of the last three years.

Major English-speaking destinations, notably the US, Canada, and Australia, have also notably outpaced France’s enrolment growth over this period. The US surpassed the one-million-student mark in 2015/16, Canada has seen its foreign enrolment expand by nearly 60% since 2010, and Australia’s foreign student numbers are also surging and on pace for 12% growth in 2016.

As the following table illustrates, the composition of France’s international enrolment, by proportion of major global sending regions, has been very stable over the past several years. While absolute student volumes have changed over this period, each sending region accounts for roughly the same percentage of total enrolment in 2015/16 as it did in 2010/11. 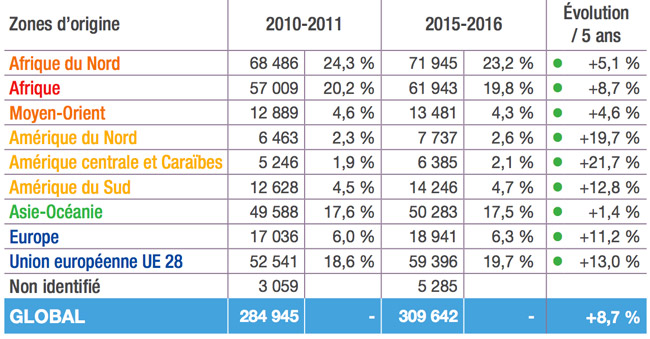 Drilling down a little further the following graphic shows individual sending markets for France for 2015/16. Africa remains the home of France’s most important education export markets. More than four in ten of all foreign students in France come from Africa and the continent has provided some of the most important drivers of French enrolment growth over the last five years (including Morocco with 15% growth since 2010/11, Congo at +24%, and Côte d’Ivoire at +50%). 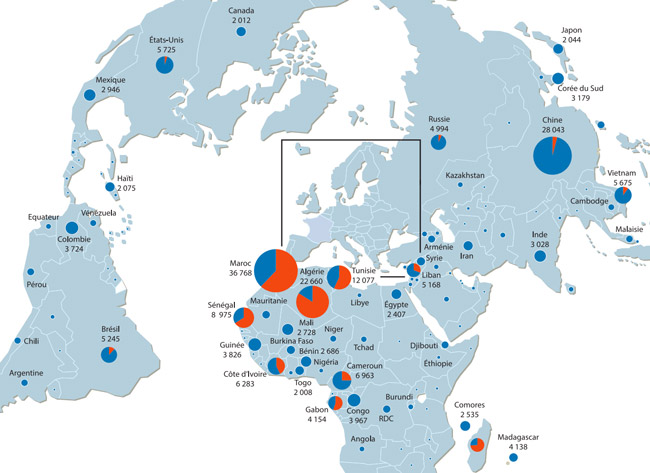 Non-European sources of foreign students in France, 2015/16. The red indicator indicates the portion of outbound students from each country who chose France as their study destination. Source: Campus France 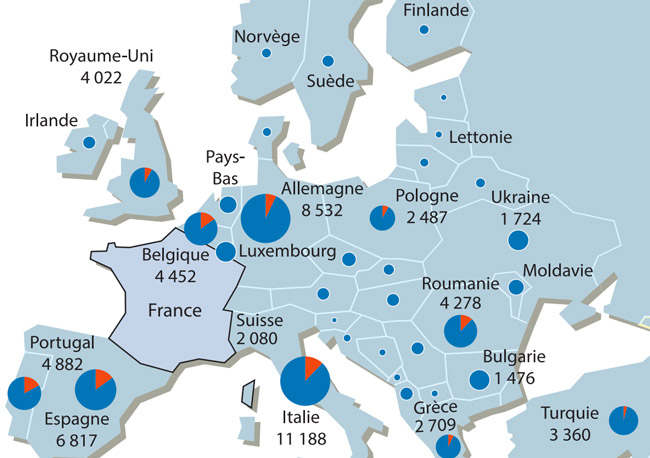 European sources of foreign students in France, 2015/16. The red indicator indicates the portion of outbound students from each country who chose France as their study destination. Source: Campus France

This entry was posted in Europe, France, Regions.