EU applications to UK higher education down 7% for 2017

Speaking to the committee, University College London President Michael Arthur reported on the latest Universities and Colleges Admissions Service (UCAS) data in the wake of the just-passed 15 January admission deadline for the 2017/18 academic year. 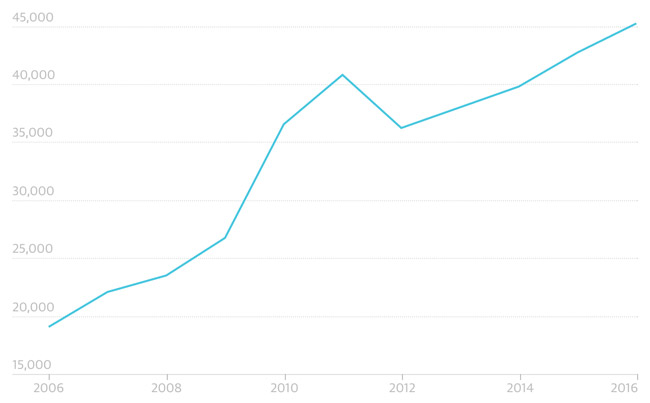 This echoes a trend we observed late last year when UCAS reported on applications volumes from an earlier admissions cycle for 2017/18. Those numbers indicated a 9% drop in the number of EU students applying for admission to British universities for the coming academic year. That 9% decline was observed for the 15 October admissions deadline, a milestone that applies only for applicants to medical, dentistry, and veterinary degrees, as well as for all programmes at the University of Cambridge and the University of Oxford.

That early cycle typically reflects only about 10% of all application volumes for the academic year, with much of the balance processed after the 15 January deadline. And that is the significance of the broader decline reported in committee earlier this month.

Universities UK indicates there are roughly 125,000 EU students enrolled in the UK currently, representing about 5.5% of total higher education enrolment in the country.

A 7.5% decline in applications traffic is not likely to translate directly into a corresponding drop in the number of EU students enrolled in the UK. But that pool of European students has been on the decline in any case, and declining application volumes will not help to reverse the trend. As we noted earlier this month, the Higher Education Statistics Agency (HESA) reports that EU enrolment across the UK fell by 4% between 2011/12 and 2015/16.

The falling EU application volumes for 2017/18 suggest that the trend toward declining EU enrolment will persist for the coming academic year. While not explicitly linked to last year’s Brexit vote, declining numbers of EU students in the UK will no doubt be attributed to Britain’s decision to leave the European Union.

The Guardian reports on remarks made at committee by Universities UK Chief Executive Nicola Dandridge, who pointed to the UK’s weakening competitive position: “We are concerned about EU numbers. Bear in mind this is coinciding with our competitor countries, particularly in the EU, seeing this as a huge advantage for them. They are redoubling their marketing efforts and see Brexit as posing a good opportunity for them to recruit internationally mobile EU students.”

“If the UK wants to remain a top destination for international students and academics, it needs a new approach to immigration that is proportionate and welcoming for talented people from across the world. This will be even more important as the UK looks to enhance its place in the world post-Brexit.”

From the field: The new student recruitment landscape in Saudi Arabia https://t.co/aBaRbaw7gX https://t.co/4vEUkJYjA9 - 4 days ago