Donald J. Trump thwarted the projections of pollsters and analysts late last night with a stunning victory that saw him elected the 45th President of the United States.

In the hours since, world reaction has been pouring in and there is plenty of shock and concern to go around. “The world gasped in collective disbelief on Wednesday following the victory of Donald Trump in the US presidential race, with apprehensive allies seeking to put a brave face on a result they had dreaded and American adversaries exulting in an outcome they see as a potential turning point in global affairs,” said an early item from The Washington Post.

As with the UK’s Brexit vote in June, markets, partners, and international institutions generally dislike unexpected election results and we can expect some aftershocks in financial exchanges and currency markets. A 9 November flash update from The Economist offers a stark reading for the weeks and months ahead: “Mr Trump’s election victory will cause widespread alarm across the global economy, given his loose grasp of economic policy, unabashed political populism, and tendency for contradiction. We expect to see wild gyrations in bond, stock, and currency markets until Mr Trump provides some clarity on his policy agenda.”

The outlook now is for an America – at least in terms of its foreign policy, trading relationships, and perhaps even immigration – that is more inward-looking. “Criticisms of trade, immigration and international engagement were central to his candidacy,” said The New York Times today. But Mr Trump also made a point in his late-night victory speech of saying, “I want to tell the world community that while we will always put America’s interests first, we will deal fairly with everyone, with everyone – all people and all other nations. We will seek common ground, not hostility; partnership, not conflict.”

The view from here

Reaction has been equally swift within the sphere of international education, and there is considerable commentary from educators and students alike so far.

Even a cursory pass through a major social platform like Twitter – as the following sample illustrates – suggests that the election result could well influence foreign students’ plans for study in the US. 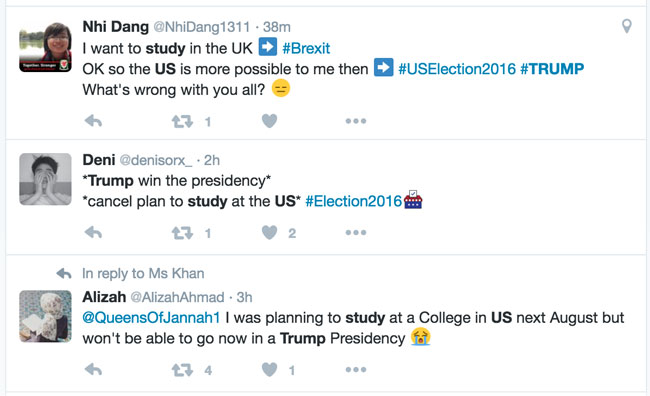 A representative sample of international student commentary retrieved from Twitter on 9 November 2016.

The immediate question that rides along with such commentary is whether this simply reflects a more immediate emotional response to an unexpected result, or whether it foreshadows a more durable shift in student perception.

As we explored recently, popular perceptions of the attractiveness of study destinations have been shown to have important effects on student mobility, particularly around widely covered events reflecting the political climate of a destination or issues of student safety or security. In the specific case of the US presidential election, recent surveys have indicated that significant percentages of prospective students would be less likely to study in the US following a Trump victory.

“College application deadlines for fall 2017 admissions are fast approaching and these election results will give an unwelcoming message to international students,” he added, in observing how a Trump victory may be seen by prospective students. “It would hurt the attractiveness of the US as the most-preferred destination of choice. Recruitment and admissions professionals will have a hard time making a case for the US.”

Other educators have struck a more cautious, or even optimistic, tone. Commenting by email on election night, NAFSA CEO Marlene M. Johnson said, “There is so much at stake for all of our citizens as well as for the international community in how we choose to move forward now that the campaign season is over.” But Ms Johnson also noted that the priorities of international educators will remain unchanged: “To actively advocate for US policies that create a more welcoming and globally engaged United States.”

American Council on Education President Molly Corbett Broad congratulated the President-elect in her own statement immediately following the election: “I join more than 4,000 college and university presidents and other higher education leaders across the country in wishing President-elect Trump well as he prepares to embark on his term in January and address the many challenges facing our nation at home and abroad. The entire higher education community looks forward to working with the Trump administration on key issues such as expanding access to educational opportunity, increasing levels of attainment and supporting cutting-edge research and innovation.”

For additional background on the potential fallout for international student mobility in the US and the country’s international competitiveness, please see “Power of perception: How the US presidential race could impact student recruitment”.

This entry was posted in North America, Regions, United States.