More than one million international students in the US

The overall picture from this year’s report is of continued growth for the US, albeit not at the record-breaking pace of 2015, and of some important underlying shifts in sending markets.

To call out just a few of the top-line findings:

Enrolment diversification remains a critical issue this year, with China accounting for more than three in ten foreign students in the US. The top three sending markets alone – China, India, and Saudi Arabia – represent more than half of all international enrolment in the country. 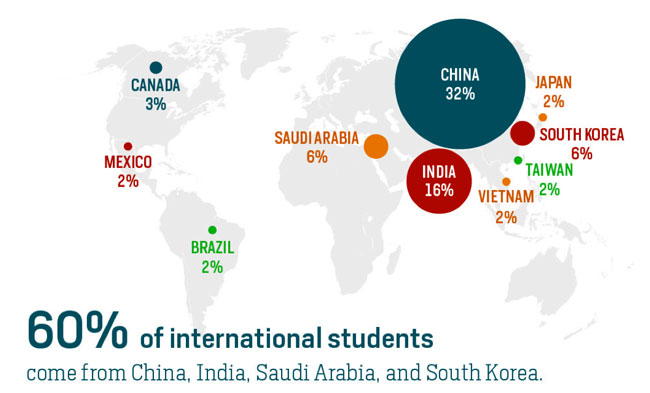 Top ten countries of origin for international students in the US, 2015/16. Source: IIE

Attentive readers will note that another traditional top three source market, South Korea, has fallen out of the group this year. South Korean enrolments declined again in 2015/16, registering a 4.2% decline from 2014/15 and marking the fifth straight year of decreasing student numbers from this key source market. Saudi Arabia, meanwhile, has moved into the number three spot this year with enrolment growth fueled by the massive King Abdullah Scholarship Programme (KASP). Whether or not it will remain among the top three senders is something of an open question as the funding and stability of KASP has been called into question this year.

The key Chinese market was up 8% this year, with continued strong growth in undergraduate enrolment in particular (9% this year). But India led all growth markets with a 25% year-over-year increase for 2015/16, and with that burgeoning enrolment still heavily concentrated in graduate studies. Fueled in part by significant increases in Indian enrolments in recent years, IIE reports that, “More than a third of [all] international students [in the US study] engineering, math or computer science, and 14% engaged in Optional Practical Training (OPT), including many in science, technology, engineering, or math (STEM) professions.”

On the other side of the ledger, and following significant funding cuts in its Science Without Borders programme, Brazil led the pack among declining markets with an 18% drop in student numbers in the US between 2014/15 and 2015/16. Leaving South Korea aside, the six other declining markets among the top 25 countries of origin for the US recorded only modest decreases of one or two percentage points each.

“The Open Doors findings show that international students value the quality, diversity and strong reputation of US institutions and recognise that these institutions will give them opportunities that can help them not only in their education but also in their careers,” said IIE President Allan Goodman.

“At the Institute of International Education, we believe American colleges and universities offer a premiere education and valuable training to students from around the globe and that students from other nations also teach us a lot about the world we share,” he added. “The more we can open doors to other cultures for our students, the better off our country and our world will be.”