New figures from the Australian Bureau of Statistics (ABS) show continued growth in Australia’s international education sector. The updated ABS data reveals total direct spending on fees and related goods and services at AUS$19.9 billion (US$14.9 billion) for 2015/16, a year-over-year increase of nearly 6% on the same ABS baseline data for 2014/15.

That baseline value is important here for comparison’s sake, but also to underscore, as we reported earlier this year, that there are other areas of expenditure that can be readily added to this amount. These include spending by short-term language students, tourism spending by visiting friends and relatives, and revenues related to offshore campuses.

That additional spending totalled nearly AUS$1 billion in an earlier Deloitte analysis, and places the total value of the sector closer to AUS$21 billion for 2015/16 (US$15.7 billion). 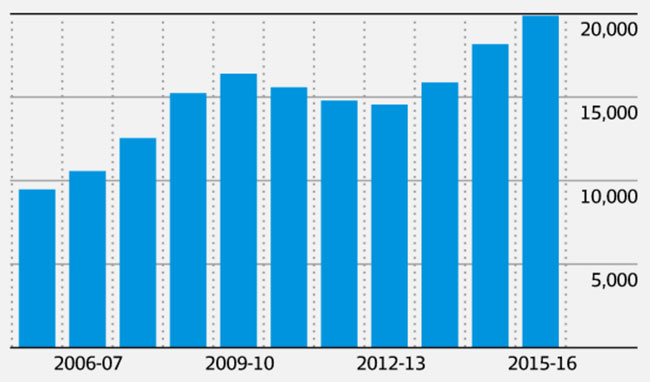 In the often-variable way of reporting economic impact values, government officials have settled on the figure of AUS$20.3 billion for the 2015/16 fiscal. The Australian Financial Review, however, has subsequently reported direct spending of AUS$20.96 billion for the 12-month period ending September 2016, marking the first time that spending on international education has ever topped the AUS$20 billion mark in a 12-month period.

The ABS data reveals that Australia’s higher education institutions attract nearly 70% of spending on international education, reflecting both the higher fees in the sector, relative to other education segments such as ELICOS and vocational training, as well as the longer terms of study for degree students.

All told, the ABS estimates spending of AUS$13.7 billion by international higher education students in 2015/16. This compares to AUS$3.2 billion spent on vocational programmes, AUS$1 billion on ELICOS programmes, and AUS$800 million on K-12 studies.

“Not only is international education a core component of Australia’s economy, it contributes profoundly to Australia’s relationships with the world,” said Universities Australia Chief Executive Belinda Robinson. “Through the exchange of students on a grand scale, we’re forging relationships that underpin our future diplomacy, trade, business links, cultural insight, and personal connections.”

Given the sector’s key role in the overall economic impact of the sector, its nearly 10% year-over-year growth for 2015/16 likely foreshadows further growth for the year ahead. But the schools sector, with its 15% increase for 2015/16, grew faster still and only slightly ahead of the 13% growth recorded by vocational institutions.

In contrast, ELICOS spending was up marginally for the fiscal year (just over 1%). Language training providers, and many other international educators in Australia and elsewhere, will now watch closely through 2016/17 for the impacts of major political shifts abroad, including the Brexit vote in the UK and Donald Trump’s recent victory in the US presidential election.

Not surprisingly, much of the growth in 2015/16 continues to be driven by the Chinese market. Chinese students accounted for 27% of all Australian education export earnings in 2015/16, and, through August 2016, Australia saw a 17% year-over-year increase in the number of Chinese students enrolled throughout the country.

Shaped in large part by those growing numbers of Chinese students, international education remains Australia’s third-largest export sector, behind only iron ore and coal, and is by far the nation’s largest service export sector as well.

This entry was posted in Australia, Australia/Oceania, Regions.