Irish Minister for Education and Skills Richard Bruton released Ireland’s new international education strategy today. Irish Education Globally Connected: An International Education Strategy for Ireland, 2016-2020 launches a new cycle of targets and implementation for Irish educators and policymakers, and builds on a five-year track record of growth under the previous strategy for 2010-2015.

“As a small, open trading economy we must continue to diversify our economy,” said Minister Bruton. “International students, once they graduate, have a very strong role to play in helping Irish exporting companies to internationalise further and reach new markets through their links to their home countries.”

In a nod to the recent Brexit vote in the UK, the Minister added, “There will be strong opportunities for Ireland in the area of international education when Ireland becomes the only English speaking member of the EU.”

Indeed, the new strategy sets out some ambitious goals for growth, including the following.

These targets follow a five-year period of expansion in Ireland’s international student enrolment, during which:

As the following chart illustrates, the ELT sector is an important driver of overall enrolment and economic impact for international education in Ireland, with an impact roughly equivalent to that of all higher education segments. 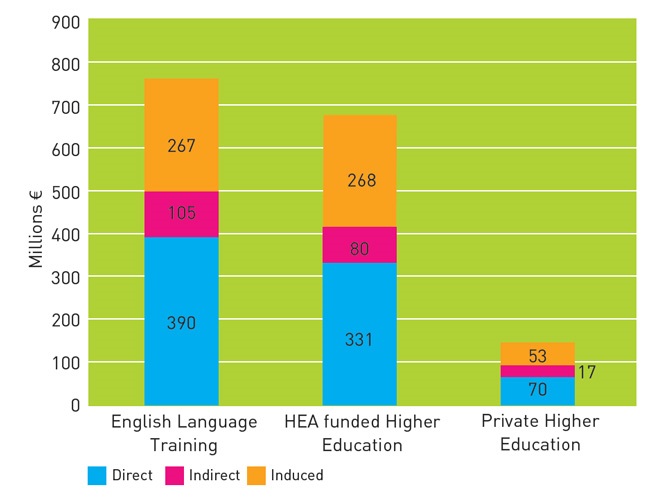 Value of direct, indirect, and induced impacts of higher education and ELT, 2014/15. Source: Department of Education and Skills

The key role of ELT is well-recognised in the 2016-2020 strategy. In addition to a commitment to support the further internationalisation of Irish higher education and improvements to student services, it also sets out a much more integrated marketing approach that links ELT and post-secondary education more strongly via a coordinated approach to international recruitment.

“The consultation process in the ELT strategy pointed to a real need for a clear and coordinated approach by all stakeholders in the ELT sector with clear connectivity to the HE sector in order to be able to sell Ireland as a destination to international students,” says the strategy document. “The sector identified that there is an opportunity to view the ELT product as part of the broader international education package that Ireland has to offer.”

Under this new approach, Enterprise Ireland will take the lead responsibility for the promotion of Irish ELT in non-EU markets, fulfilling a similar role as the agency currently plays in the international marketing of higher education abroad. This move anticipates some further regulatory change, and quality assurance measures, including the modification of eligibility criteria for the Education in Ireland brand.

The strategy seeks to strengthen the Education in Ireland brand overall. “A strong brand and consistent marketing across multiple platforms is required if Ireland is to increase the visibility of our proposition in what is a very competitive field of well-established players,” adds the report.

In a related development, the strategy also sets out a broad framework for the long-awaited International Education Mark (IEM), a quality assurance designation for Irish institutions and schools. The government now expects to enact related legislation for the implementation of the IEM by 2018.

Irish Education Globally Connected makes a number of strong linkages between policy and funding processes across the Irish government, and clearly anticipates some targeted funded in support of a further expansion of international education in Ireland. The strategy document is short on specifics in this respect. However, a related announcement from Minister Bruton indicates that funding under the strategy will be directed to marketing campaigns in key target markets, including the US, China, India, Brazil, Malaysia, and the Persian Gulf.

The Minister indicates as well that Ireland will increase its focus and funding on market development for a further group of international targets, including Canada, South Korea, Vietnam, Indonesia, Mexico, Chile, Argentina, and Nigeria.

Moving forward the implementation of the 2016-2020 strategy will be guided by the High-Level Group on International Education (HLG), a task group made up of peak bodies and government officials, and by a number of sub-groups focused on specific aspects of the strategy or segments of Irish education. The HLG will meet twice a year through 2020 and will undertake a formal review of the strategy’s implementation in mid-2018.